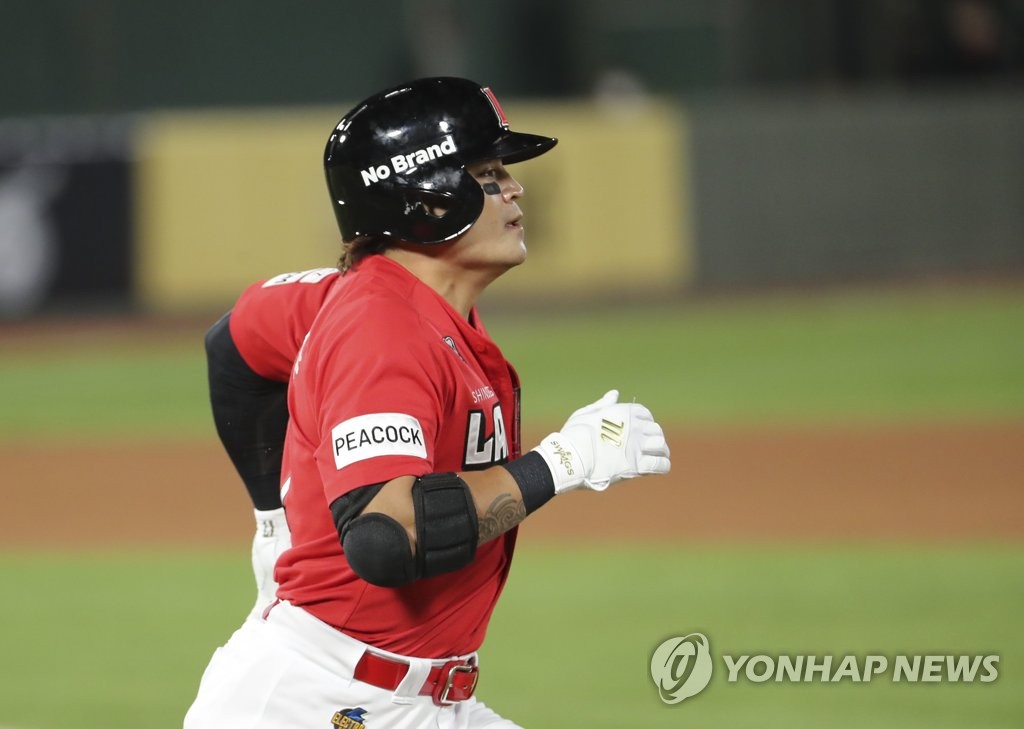 (Seoul = Yonhap News) Reporter Cheon Byung-hyeok Shin Chang-yong = Professional baseball, which had a fierce battle at the beginning of the season, is slowly showing signs of polarization.

SSG Landers, who overthrew the expectations of experts and sprinted to the top, continued to fly high with three straight wins, but the Lotte Giants, who fell to the bottom, fell into a swamp of six straight losses.

With all 8th and 10th places losing in a row, the difference between the 1st place SSG and the 10th place Lotte was 11.5 games.

SSG won the match against the Hanwha Eagles in the 2021 Shinhan Bank SOL KBO League held at Hanwha Life Eagles Park in Daejeon on the 30th, hitting 12 long and short hits, including Oh Tae-gon’s wedge home run, to win 5-1.

SSG, which swept all three matches in Daejeon, sprinted for first place by two games ahead of second-placed kt wiz.

The match between Moon Seung-won and Jang Si-hwan was tight until the middle of the match.

SSG took two walks in the second inning and Park Seong-han’s right-handed hit to score one point while Kim Chan-hyung struck a deadly blow at the full base.

Hanwha made 1-1 with Lee Seong-yeol’s infield ground ball at 1st and 3rd base with consecutive hits from Jung Eun-won and Choi Jae-hoon in the bottom of the 3rd inning, but Noh Si-hwan hit the ball and missed an additional goal.

Shin-soo Choo took an infield hit and Joo-hwan Choi chose a walk, and Jung Eui-yun and Han Yu-seom hit the right time in a row to lead 3-1.

In the ninth inning, after one shot, Chung Eui-yun’s right-handed hit followed by Oh Tae-gon hit a two-run homer on the left, putting a wedge.

Shin-Soo Choo was replaced after hitting two hits in two at-bats, including one walk.

At Sajik Stadium, the NC Dinos defeated the Lotte Giants 5-4 and ran for three straight wins.

Na Seong-beom scored with a follow-up ground ball and Aaron Altair’s sacrifice float to make it 3-0.

In the bottom of the first inning, Lotte Kim Min-soo hit a double with a double in two runs to catch up 2-3.

However, after two walks and a fierce fight in the second inning, NC added one point without a hit with Jun-young Park’s sacrifice fly and ran away 4-2.

Lotte recovered one point with a double by Min Byung-hun at the end of the second inning.

In the beginning of the 3rd inning, Kim Jin-wook blocked Na Seong-beom and Yang Eui-ji with three strikeouts, such as striking out.

However, Kim Jin-wook walked in the 4th inning by leading hitter Park Seok-min and hit a heavy hit by Kang Jin-seong, and was eventually replaced after conceding one more with a send bunt and heavy throw.

Lotte caught up 4-5 at the end of the 4th inning, with Jae-hyun Choo hitting a solo home run in mid-month. It is the first home run hit by Choo Jae-hyun, who joined in 2018, in four years of his debut.

However, Lotte could not pursue any more and knelt by one point.

Kim Jin-wook, who started in 39 days, gave up five runs with three hits and four walks in 3⅔ innings, and suffered his third loss without a win.

On the other hand, NC coach Lee Dong-wook was ordered to leave in accordance with the rules after protesting the results of the video reading in the 8th inning.

It was Lee’s first red card since taking the NC battalion in 2019.

kt wiz defeated the KIA Tigers 4-3 in the Gwangju visit game thanks to a final hit from pinch hitter Yuhan-jun in the early ninth inning.

After defeating KIA for two days in a row, kt climbed to second place alone, 0.003 ahead of the Samsung Lions, who lost on the day.

In the second inning, leading hitter Joilo Almonte opened the door with a double from right-middle, and following Kim Byeong-hee’s bunt, Dong-jin Kwon blew a right-handed hit to take the lead.

Dong-jin Kwon went to third base with stolen bases and heavy throws, and then scored with a sacrifice fly from Hong-goo Lee to make it 2-0.

In the 6th inning, Baekho Kang and Almonte succeeded in double stealing from 2 companies 1st and 3rd, leading 3-0.

KIA, who was pushed to no hit by kt starting Quevas until the 5th inning, made a tie in the attack at the end of the 6th inning.

When Lee Woo-sung and Choi Jeong-yong chose to walk in a row, Choi Won-joon made a right-handed hit following the send bunt to recover one point.

After two games, Frederick Tucker and Jung-Hoon Lee hit a series of just-in-time hits to create a 3-3 tie.

The tight balance was broken in the ninth inning.

For kt, the leading batter Almonte hit a double in left center.

kt bullpen Sovereign won 1⅓ innings with no hits and no runs and won the season’s first win (2 saves).

The Doosan Bears defeated the Samsung Lions 4-2 with a kick and two home runs from the starting Walker Rocket.

After one shot in the second inning, Doosan Yang Seok-hwan hit a solo home run on the left to take the lead.

In the fifth inning, Kim In-tae blew a solo home run on the left after one shot, widening the score to 4-0.

When Samsung Kim Ji-chan, who chose to walk in the bottom of the 5th inning, stole second base, Jose Pirella called in a heavy hit and made up for one point.

At the end of the ninth inning, Koo Ja-wook’s just-in-time hit from 2 companies, 1st and 2nd, made up for one point, but failed to come back.

LG took the lead with Jeong Ju-hyeon’s just-in-time hit from second base at the bottom of the second inning.

Next, Hong Chang-gi’s walk and Oh Ji-hwan survived an error and added one point, and in the continuous two-game run, Eun-Sung Chae blew a double that called in all three runners, leading 5-0 at once.

In the 6th inning, he scored three points with Oh Ji-hwan’s double and triple, and put a wedge early.

Suarez had six hits and two runs in the seventh inning, and was on his sixth win (two losses) of the season, and climbed to the top of the tie for the most wins.