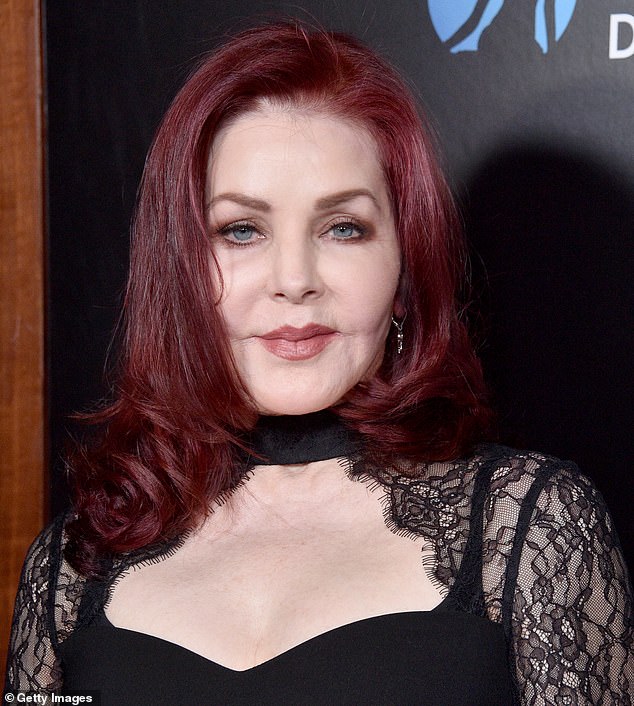 Elvis Presley’s ex-wife Priscilla has opened up about the ‘very difficult’ first years of her marriage to The King – detailing the extreme toll of the ‘vicious’ public scrutiny she faced after tying the knot at the tender age of 21.

The 76-year-old actress, who met Elvis when she was just 14 and he was 24, spoke out about the earliest days of their marriage while visiting a new exhibition, Elvis: Direct From Graceland, at the Bendigo Art Gallery in Australia.

‘I found out how vicious people could be… there were rumours I was pregnant, and that’s why he got married and I’m going, “Oh my God, this is not gonna be good for me,'” she recalled.

Priscilla spent eight years in a relationship with Elvis before they wed in a Las Vegas ceremony in 1967 – having first met the music heartthrob, who was ten years her senior, in Germany, when he was serving in the Army.

She now admits that the years she spent with the King of Rock and Roll before their marriage helped to give her insight into what life might be like after they tied the knot – but says it didn’t prevent her from going through a ‘very difficult’ time in the early years of their union.

‘The beginning [of the marriage] was very difficult, but I knew what I was in for because I saw it at a very young age,’ she said.

Truth: Priscilla Presley, 76, has revealed she ‘knew’ what she was getting into when she married Elvis

Wedding bells:  Priscilla told a variety of reporters at the launch of the new exhibition ‘Elvis: Direct From Graceland’ at Bendigo Art Gallery: ‘The beginning [of the marriage] was very difficult, but I knew what I was in for because I saw it at a very young age’ (pictured on their wedding day in 1967)

The ‘Naked Gun’ star said the rumours surrounding the ‘Can’t Help Falling in Love With You’ hitmaker were a struggle for her but she was advised to not ‘pay attention’ to speculation and gossip by her husband, who she divorced in 1973.

Priscilla said: ‘That’s when I started not reading papers anymore or [magazines] in the grocery stores.’

She added: ‘It was hard to get accepted. But he always told me, “Don’t pay attention… don’t even listen and don’t look at the tabloids.”

‘You know what the truth is so just be cautious, but be aware.’

Priscilla was still a schoolgirl when she met Elvis, who had been drafted into the US Army and was stationed on a base in Germany, near where her family was living.

After he returned home to the US, they kept in touch via phone calls – before she eventually convinced her parents to let her move to Memphis, Tennessee full-time to be with him in 1963.

Rumours: The ‘Naked Gun’ star said the rumours surrounding the ‘Can’t Help Falling in Love With You’ hitmaker were a struggle for her but was assured to not ‘pay attention’ by her husband, who she divorced in 1973

Family: Priscilla – who had daughter Lisa Marie, now 54, with Elvis in 1968 – described the late-night dates they used to have together in their courting days that made her ‘not do well’ in school (pictured with their baby daughter in 1968)

However, while she has spoken in the past of her deep desire to be with Elvis, Priscilla now admits that merging their very different lifestyles was not without its complications, explaining that his party-hard ways and love of late nights quickly began to take a toll on her schoolwork.

The mother-of-one – who had one daughter, Lisa Marie, now 54, with Elvis – recalled how the rock and roll legend would take her out for private movie screenings late at night near his home at Graceland, which oftentimes saw them returning in the early hours of the morning.

Memories: On their trips to the movies, Priscilla said: ‘We would leave [Graceland] right after the Johnny Carson monologue and we would head out for the theatre, sometimes coming home at three, four or five o’clock in the morning’ (Daughter Lisa Marie pictured in 2015)

Priscilla recalled how they would leave Graceland shortly after the start of Johnny Carson’s late-night talk show, saying: ‘We would head out for the theatre, sometimes coming home at three, four or five o’clock in the morning.

In contrast to his glamorous persona, Priscilla also revealed that Elvis was a bookworm behind-the-scenes and would often read into the early hours.

‘We could come home at two o’clock in the morning or later, and he would go right to the books and start reading,’ she said.

Priscilla has previously detailed how she gave up her teenage years in order to ‘adapt’ to Elvis’ lifestyle – revealing that part of the reason for their divorce was her desire to experience the world on her own.

‘I lived his life, you didn’t live your own life, so you kind of lost yourself,’ she said during a 2016 interview with ITV’s Loose Women.

Priscilla said: ‘We could come home at two o’clock in the morning or later, and he would go right to the books and start reading (pictured in 2019)

‘I didn’t have my teenage years as a normal girl obviously so I had to adapt, and I did adapt, I just followed.’

Both Elvis and Priscilla were known to have engaged in extramarital affairs during their union, however she said during her 2016 interview that their divorce did not come as a result of her falling out of love with him – rather her need to experience the world for herself.

‘I did not divorce him because I didn’t loved him, he was the love of my life, but I had to find out about the world,’ she said.

Priscilla’s latest appearance in Australia comes as a new trailer for Baz Luhrmann’s highly-anticipated biopic of Elvis has been released, with Austin Butler taking on the role as the King of Rock ‘n’ Roll alongside Tom Hanks, who plays his larger-than-life manager Colonel Tom Parker.

The 30-year-old Once Upon a Time… In Hollywood star proved to be a dead ringer for the iconic All Shook Up hitmaker as he performed some of the late legend’s iconic dance moves.

Elvis will be released in theatres this summer on date June 24, 2022.

Hubba Hubba! The new trailer for Baz Luhrmann’s highly-anticipated biopic of Elvis has been released, (Austin Butler pictured in character)

Completely transformed: The 30-year-old Once Upon a Time… In Hollywood star proved to be a dead ringer for the All Shook Up hitmaker. Elvis is pictured right in 1977

In December, Luhrmann had nothing but praise for Butler as he weighed in on his portrayal of Presley for the first time.

Speaking to Daily Mail Australia, the 59-year-old said he was very impressed with Butler’s portrayal of the legendary singer and feels like his performance will put him on the map.

‘I’m not going to make Austin anything,’ he said when asked if the film would turn him into a mega star.

‘Austin is going to make himself a superstar, he is phenomenal in the movie.’

‘I don’t usually say anything about the performances in my movies but he is phenomenal.’

He’s a star! Baz Luhrmann, 59, (pictured) had nothing but praise for American actor Austin Butler as he weighed in on his portrayal of Elvis Presley for the first time

The ‘mewing’, this technique which transforms the face without surgery, is a hit on social networks