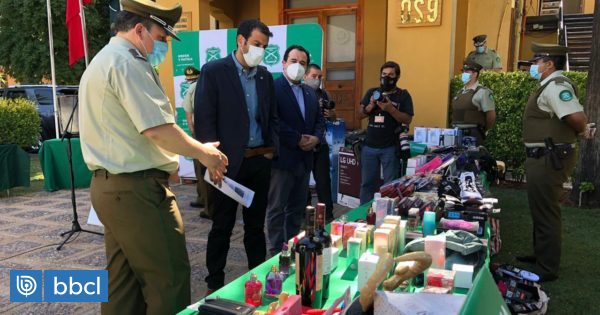 As “pure and hard crime” Carabineros described the bulk of the 74 detainees in incidents or crimes during the day of protests on Friday, nationwide.

There were 36 violent events, concentrated in the region of Tarapacá, Antofagasta, Valparaíso, Concepción, Temuco, Puerto Montt and Santiago.

Specifically, there were 74 detainees, 56 of them in the Metropolitan region, and 52 of these in the center of Santiago, most of them for the crime of looting and two for the launching of incendiary bombs, which “are designed to cause serious damage against the Carabineros ”, indicated the national director of Order and Security, General Esteban Díaz.

One of those captured had been caught firing with a pneumatic weapon and carrying Molotov bombs.

Of the total captured, 10 have more than 140 previous arrests for crimes such as robbery, theft and others. Even 3 of them concentrate more than 43 crimes previously. “It is pure and simple crime”Diaz emphasized.

The Minister of the Interior, Rodrigo Delgado, for his part, stressed that this is the highest number of detainees so far this year, of violent situations, along with the fact that the new Carabineros protocols are giving results.

“The protocols are working and there is compatibility between the protocols and upload the detainees. I highlight it, because these detainees come with a very large set of evidence. It is not that people stop because they are passing or walking. They are all accompanied by photographs, monitoring with drones, ”said Delgado.

“I witnessed how the Carabineros prevented looting and fires. There was a different strategy, ”Delgado pointed out.

On the occasion, in the premises of the OS9, evidence of items stolen during looting yesterday was exhibited.