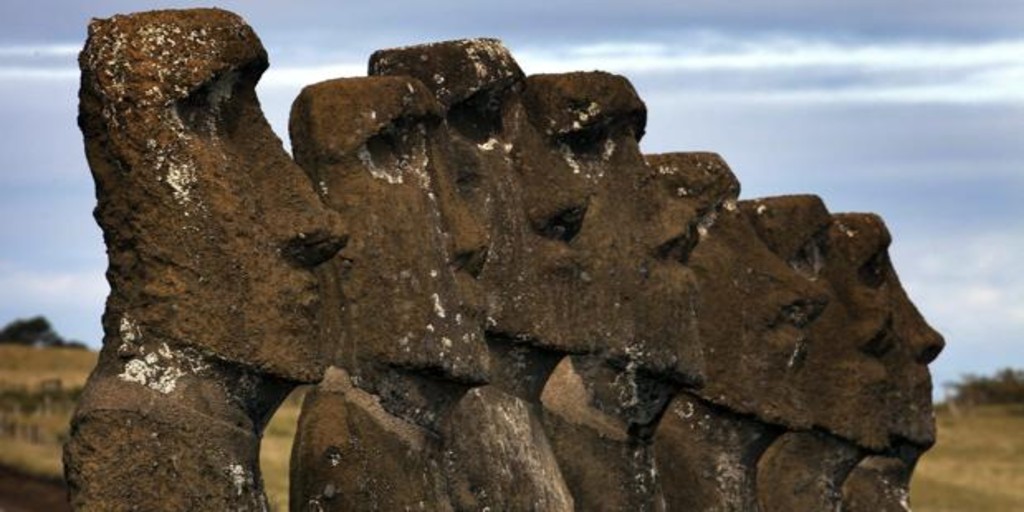 New research by five scientists suggests that the myth of demographic collapse from Easter Island really It never happened before the landing of the Europeans.

The study, published in the journal ‘Nature’ refers to the known story that the inhabitants of Easter Island (or Rapa Nui in the native language), located in the middle of the Pacific about 3,700 kilometers from Chile, they cut down the trees to make agricultural fields or to erect giant statues with which to honor their clans.

That decision led to a catastrophic collapse to the point that only a few thousand villagers witnessed the arrival of the first european ships disembarking on its remote shores in 1722.

However, an investigation by anthropologists Robert DiNapoli and Carl Lipo, from Binghamton University (United States) rule out that demographic collapse.

Easter Island has long been a focus of scholarship on issues related to the environmental collapse. To solve some unknowns, the researchers they rebuilt the population levels on the island to determine if such a collapse occurred and, if so, its scale.

“For Rapa Nui, a large part of the academic and popular discussion about the island has centered around this idea that there was a demographic collapse and that it is correlated over time with the climatic and environmental changes“Says DiNapoli, associate postdoctoral researcher in environmental studies and anthropology.

After being populated, the island that was once wooded was bare of trees between the ages XII y XIII. Very often, scholars point to human-driven ‘cleansing’ to leave hollow to agriculture and the introduction of einvasive species, such as rats. These environmental changes reduced the regeneration capacity of the island and led to a demographic decline. Also, around the year 1500 there was a climate change which led to a drier climate on Rapa Nui.

“There are changes. Its population changes and its environment changes; over time, the palm trees were lost and in the end, the weather became drier. But do those changes really explain what we’re seeing in the data from population through radiocarbon dating? ”Says Lipo, professor of anthropology and environmental studies.

Archaeologists have different ways of reconstruct population sizes using measurements such as observing the different ages of individuals at the sites of burial or count the places of old houses. The latter can be problematic because it makes assumptions about the number of people living in each home and whether the homes were occupied at the same time, according to DiNapoli.

The most common technique uses the radiocarbon dating to track the scope of human activity for a moment in time and extrapolate population changes from that data, but, as DiNapoli acknowledges, radiocarbon dates can be uncertain.

DiNapoli and Lipo present a novel method able to resolve these uncertainties and show how changes in size from population are related to environmental variables over time.

Standard statistical methods don’t work when it comes to linking radiocarbon data to environmental and climate changes, and the population changes related to them. Doing so would involve estimating a ‘likelihood function’, which is currently difficult to calculate. However the bayesian analysis it’s a form of statistical modeling that doesn’t require a likelihood function, so it gives researchers a solution, according to DiNapoli.

In short, there is no evidence that the islanders used palm trees for food, a key point of many collapse myths. Research shows that deforestation was prolonged Y no resulted in a catastrophic erosion, since the trees were replaced by spaces that increased agricultural productivity. During times of drought, people may have relied on coastal seeps for fresh water.

The construction of the moai statues, viewed by some as a contributing factor to collapse, actually continued even after the arrival of the Europeans.

In short, it is not true that the island had a few thousand people before European contact because its number was increasing instead of decreasing, according to the new research. “Those resilience strategies they were very successful, despite the fact that the climate became drier, ”says Lipo.