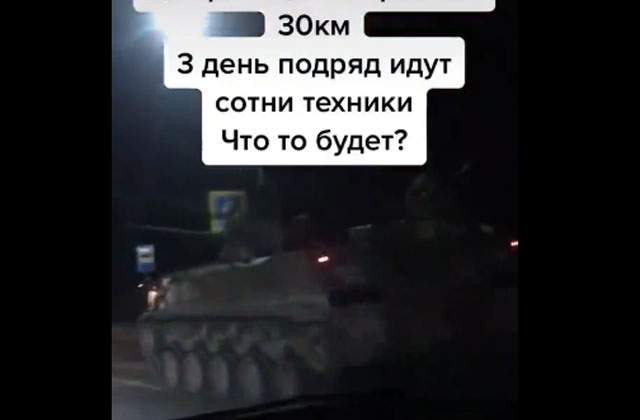 The U.S. Secretary of State said in an interview with the press that “within tonight, Russia could invade Ukraine in its entirety.” Ukraine’s president insisted that “Putin had already authorized the invasion”. In Donbas, a Russian army truck with an upside-down license plate was caught, and news that Ukrainian soldiers stationed in the area were receiving ‘digital flyers’ from Russia were also reported through social media.

U.S. Secretary of State Tony Blincoln said in an interview with NBC on the 23rd (local time) that “Russia could invade Ukraine in its entirety, even tonight,” Reuters reported.

“It appears that Russia has the necessary forces in place to invade Ukraine,” Blincoln said, according to the news agency. “However, we cannot specify the exact time or location of the Russian attack,” he added.

“There is still a chance to avert a major aggression from Russia,” Blincoln said, leaving room for diplomatic resolution.

Ukrainian President: Putin approves attack on Ukraine I will do anything for peace.”

Ukrainian President Volodymyr Zelensky claimed on his Telegram that “Russian President Vladimir Putin has already authorized an attack on Ukraine”. Zelensky’s assertion was based on President Zelensky’s claim that “I proposed a meeting with Putin through a video of a 10-minute speech I uploaded to my Telegram account, but there was no response.”

▲ A text message from the Russian Army to members of the 53rd Brigade of the Ukrainian Army stationed in the Luhansk region of Donbas. ⓒTwitter ‘English Luhansk’ capture

President Zelensky also appealed to Russia, saying, “Ukraine wants peace,” and “I will do anything for peace.”

The basis for the claims of Secretary Blincoln or President Zelensky has not been verified. However, abnormal signs are being detected in the Donbas region in eastern Ukraine, where Russia said it would send a ‘peacekeeper’.

There are other signs as well. A Twitter user named ‘English Luhansk’ introduced a text message received by a member of the 53rd Brigade of the Ukrainian Army deployed near Luhansk on the 23rd. “Fellow Ukrainian soldiers! Russian forces have already entered Donetsk and Luhansk. It is not yet too late for you to go home.” The Ukrainian side analyzed that the Russian army had started a psychological warfare against the Ukrainian forces guarding the eastern Donbas region.

Stay hydrated and eat vegetables.. 8 tips for a healthy diet for seniors