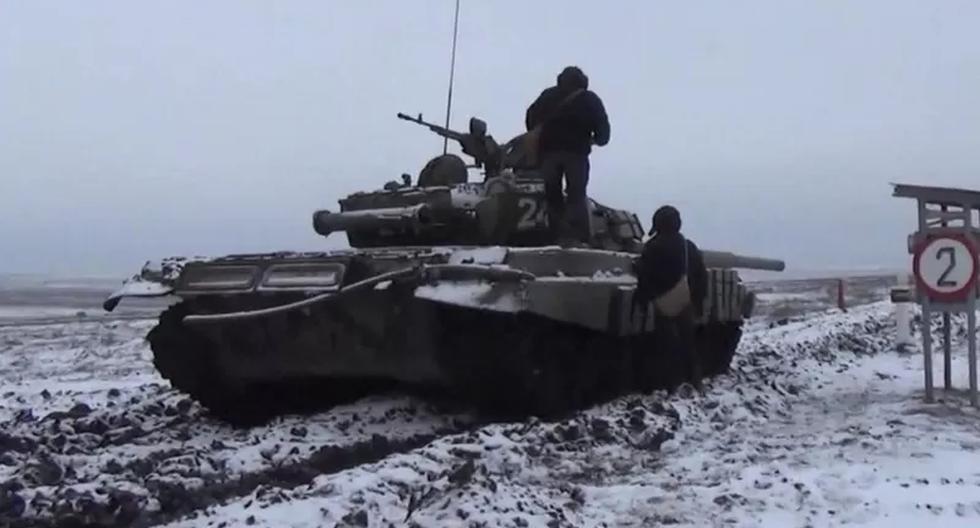 Are the forces preparing? Russian for the war in Ukraine? US President Joe Biden certainly anticipates some kind of military operation.

Russia wants a promise from the West that Ukraine will not join its NATO defensive alliance, and while the two sides are negotiating, that commitment is not going to happen.

LOOK: Why a possible Russian invasion of Ukraine raises fears that Europe is closer to war in decades

What happens next could put the entire security structure of Europe is in jeopardy.

1. Why is Russia threatening Ukraine?

Russia He denies that he is planning an invasion, but he has already seized Ukrainian territory and has an estimated 100,000 troops deployed near its borders.

Russia has long resisted Ukraine’s rapprochement with European institutions, and NATO in particular.

Ukraine shares borders with both the European Union and Russia, but as a former Soviet republic it has deep social and cultural ties with Russia, and there is a large Russian-speaking population.

Since then, pro-Russian rebels have fought the Ukrainian army in a conflict that has claimed more than 14,000 lives.

2. How big is the risk of invasion?

Russia says that it has no plans to attack Ukraine: and the head of the armed forces, Valery Gerasimov, even denounced reports of an impending invasion as a lie.

But there is a lot of tension and Russian President Vladimir Putin has threatened “appropriate retaliatory military-technical measures” if it continues. what he calls the aggressive approach of the West.

The NATO Secretary General warns that the risk of conflict is real and President Biden points out that he believes that Russia will mobilize.

The United States says it is aware of alleged Russian plans to increase its forces near Ukraine “in a very short time.”

The conflict between the rebels and the Ukrainian army has continued to this day, although there is an unstable ceasefire.

But what is of most concern are the Russian forces operating beyond the border with Ukraine.

The risk of conflict is real, says NATO Secretary General. But it doesn’t seem imminent.

The United States indicates that Russia has not offered any explanation about the troops stationed near Ukraine, and Russian troops and tanks headed to Belarus for exercises.

Russia’s deputy foreign minister compared the current situation to the Cuban missile crisis of 1962, when the United States and the Soviet Union came close to a nuclear conflict.

Western intelligence suggests that a Russian raid or invasion could happen sometime in these early 2022.

3. What does Russia want from NATO?

Russia has spoken of a “moment of truth” in reshaping its relationship with NATO.

“It is absolutely mandatory for us to ensure that Ukraine never, ever becomes a member of NATO,” Russian Deputy Foreign Minister Sergei Ryabkov said.

Moscow accuses NATO countries of “injecting” Ukraine with weapons and the United States of stoking tensions.

President Putin has complained that Russia “no longer has anywhere else to retreat to. Do you think we will sit idly by?

In reality, Russia wants NATO to return to the borders it had before 1997.

He demands that the alliance not have further eastward expansion and also wants an end to NATO’s military activity in Eastern Europe.

That would mean combat units would be withdrawn from Poland and the Baltic republics of Estonia, Latvia and Lithuania, and missiles would not be deployed in countries like Poland and Romania.

Russia has also proposed a treaty with the United States banning the deployment of nuclear weapons beyond its national territories.

4. What does Russia want with Ukraine?

Russia seized Crimea in 2014, arguing that it had a historic claim to the peninsula.

Ukraine was part of the Soviet Union, which collapsed in December 1991, and Putin called the event the “disintegration of historical Russia.”

A hint of President Putin’s thinking on Ukraine appeared in a lengthy article last year when he called Russians and Ukrainians “one nation” and called Ukraine’s current leaders carrying out an “anti-Russian project.”

Russia is also frustrated that the 2015 Minsk peace agreement for the conflict in eastern Ukraine is far from being fulfilled.

There are still no agreements for independently supervised elections in breakaway regions. Russia denies accusations that it is part of the protracted conflict.

5. Can Russian military action be stopped?

Putin has spoken several times with Biden and high-level talks continue, but Russian officials have warned that Western rejection of his key demands is leading to a “dead end.”

The question is how far Russia will go. President Biden has warned that a full-scale invasion it would be a disaster for Russia.

But, if it’s a minor incursion, he controversially said the West “would end up in disagreement on how to proceed.”

The White House has emphasized that any movement across the border constitutes a new invasion, but notes that Russia has other weapons, including cyberattacks and paramilitary tactics.

The Pentagon accused Russia of preparing a “false flag operation,” with operatives ready to carry out acts of sabotage against Russian-backed rebels, to provide a pretext for the invasion. Russia denies it.

Russia has also handed out 500,000 passports in rebel-held areas, so if it doesn’t get what it wants, it could justify any action under the guise of protecting its own citizens.

However, if Russia’s only goal is to force NATO out of its “backyard”, there is no sign that it will succeed.

The 30 members of NATO have steadfastly rejected any attempt to keep their hands tied in the future.

“We will not allow anyone to slam NATO’s open door policy,” said US Deputy Secretary of State Wendy Sherman.

Ukraine is seeking a clear timetable for joining, and NATO says Russia “has no veto, no right to interfere in that process.”

And Sweden and Finland, which are not members of NATO, have also rejected Russia’s attempt to prevent them from strengthening their ties with the alliance.

“We will not give up our room for manoeuvre,” said Finland’s prime minister.

6. How far will the West go for Ukraine?

The United States has made it clear that it is committed to helping Ukraine defend its “sovereign territory.”

The main tools of the West appear to be sanctions and military aid in the form of advisers and weapons.

President Biden threatened the Russian leader with measures “like none I have ever seen” if Ukraine is attacked. But what would these measures be?

The biggest economic blow would be to disconnect Russia’s banking system from the international Swift payments system.

That has always been seen as a last resort, but Latvia has said that this would send a strong message to Moscow.

Another key threat is preventing the opening of Russia’s Nord Stream 2 gas pipeline in Germany, and the German energy regulator is currently deciding whether to approve it.

German Foreign Minister Annalena Baerbock has made it clear that if there is a further Russian escalation, then “this pipeline could not come into service.”

There could also be measures targeting the Russian Direct Investment Fund or restrictions on banks that convert rubles into foreign currency.

7. Does the West have a united response?

Washington has said it is committed to “working in unison” with its allies, but there are divisions between the United States and Europe.

European leaders insist that Russia cannot simply decide on the future with the United States.

France has even proposed that the Europeans work together with NATO and then carry out their own dialogue with Russia.

The president of Ukraine wants an international summit to resolve the conflict, in which France and Germany participate together with Russia.

The four countries have met regularly as part of the so-called Normandy Quartet, but President Putin wants any agreement on Ukraine to be tied to his NATO demands.

In the Pays de la Loire, a spectacular increase in first-timers vaccinated against Covid-19