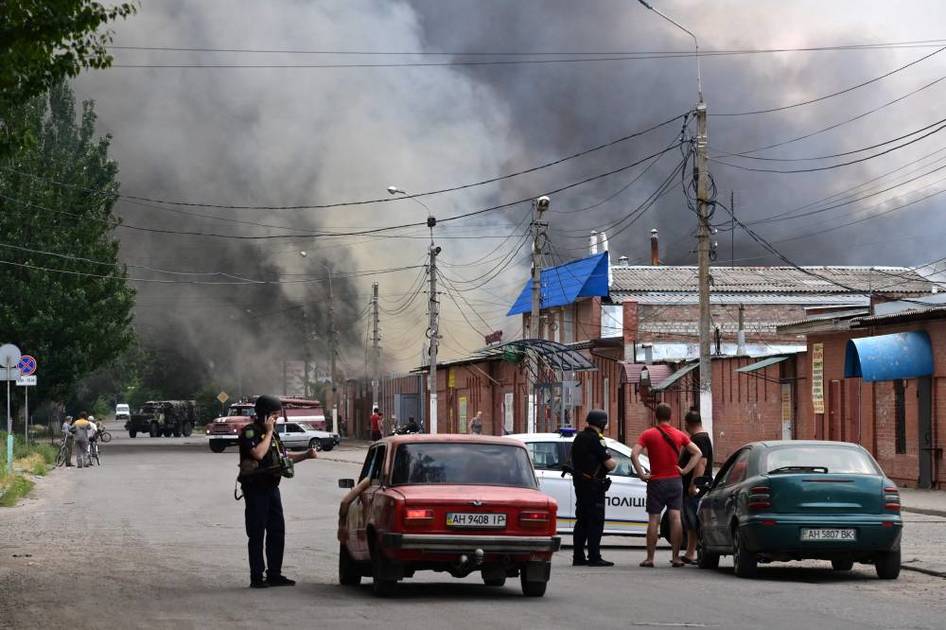 Yesterday, Tuesday, Russian forces made progress in the Donbass industrial basin in eastern Ukraine, and Sloviansk, which became the next target of Moscow, witnessed “massive bombing”, while the Ukrainian General Staff issued a circular preventing the men from leaving their areas, in an attempt to compensate for the losses.

The Russian forces advanced west towards Sloviansk and Kramtorsk, the two largest cities close to the Donetsk region, which is still under the control of Kyiv, and were about ten kilometers from the city of Seversk, which it has been bombing for several days, international media reported yesterday.

About forty kilometers away in Sloviansk, where the Ukrainian authorities have called on residents to leave, Russian forces are targeting the city with “massive” bombardment, according to Mayor Vadim Lyakh.

“Slovyansk!” said Liach. Huge bombardment on the city, in the center and in the north, everyone must take shelter.” He added that this city in eastern Ukraine had become the next target of Moscow in its military campaign in the Donbass region.

Sloviansk and the city of Kramatorsk, the administrative center of the region, remain under the control of Ukrainian forces and constitute Moscow’s next goal in its campaign to control the entire Donbass region.

Yesterday morning, the Russian military said that it had bombed two Ukrainian command centers in Donetsk. The Ukrainian presidency stated that “at least two civilians were killed and six others were wounded” in a Russian bombing in the region.

Yesterday, the Russian forces also confirmed that they had bombed four weapons and artillery depots in the Kharkiv region in northeastern Ukraine, where the Ukrainians said on Monday that they had repulsed Russian attack attempts.

In the south, Moscow also said it had shot down “a Su-25 and three marches of Ukrainian forces in the Kherson region.” It also announced that it is investigating torture that may have been subjected to Russian soldiers who were arrested and released by Ukrainian forces during a prisoner exchange with Kyiv.

In a statement, the commission in charge of criminal investigations in Russia said that some of the released Russians reported “torture” during their captivity, referring to beatings, electric shocks, and deprivation of water and food.

In an attempt to compensate for its losses in the battles that began nearly five months ago without ending, Ukraine prevented men of military age from leaving the country.

The Ukrainian General Staff said, in a Facebook post, on Tuesday, that men of military age are prohibited from leaving their hometown, and demanded that this be understood.

This is based on the 1992 law on conscription, and men between the ages of 18 and 60 need permission from the local military recruitment office to leave the area in which they are registered. These restrictions apply mainly in border areas and city limits.

The Facebook post sparked angry comments in a short period of time. Some accused the ministry of “foolishness”, while others said that these restrictions would encourage corruption in military recruitment offices.

It is noteworthy that many Ukrainians do not live in the areas where they are registered. Following the Russian military operation, tens of thousands of men of military age fled to safer areas of western Ukraine. They have already been banned from leaving the country after martial law was imposed more than four months ago. (agencies)

Unlike Hamilton and Verstappen, Leclerc is “very sensible” after a battle in high-speed copse | Formula1-Data / F1 breaking news commentary