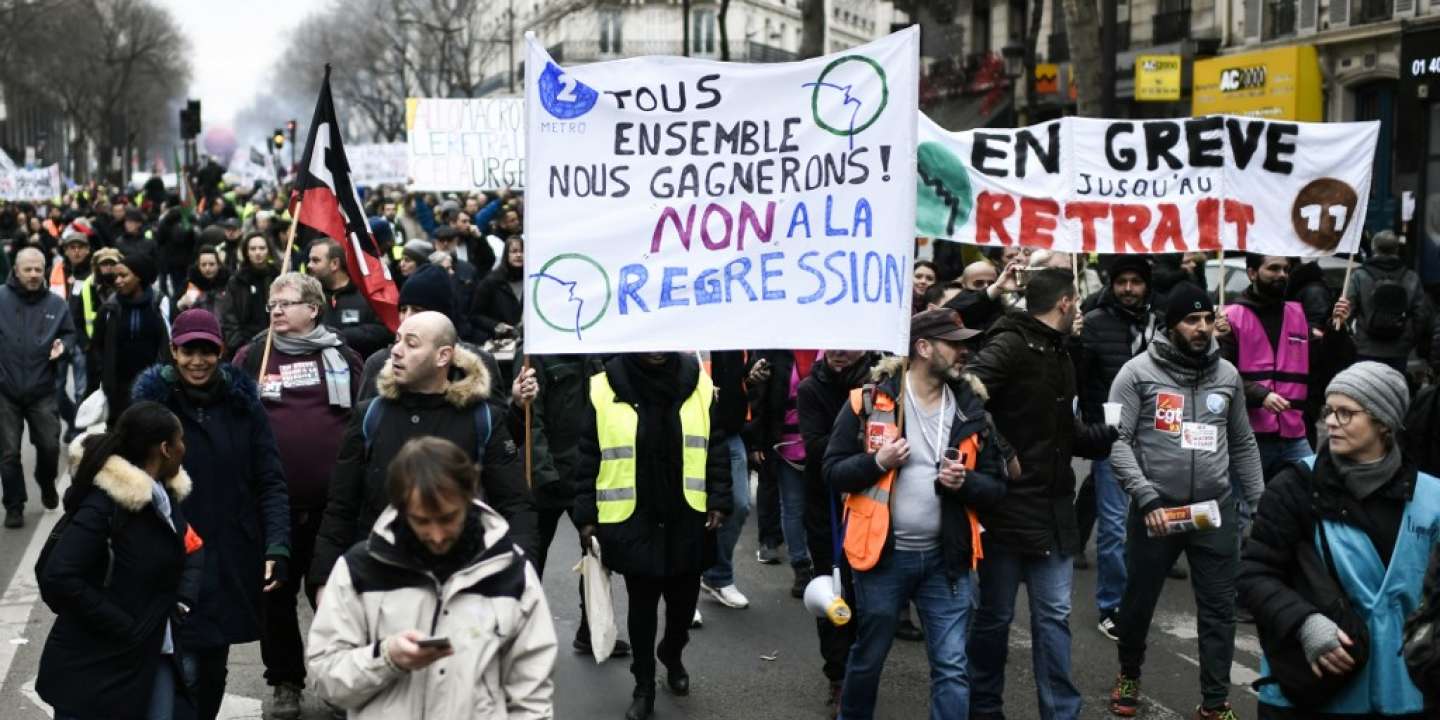 Approaching New Year’s Eve, social protest against the system project “Universal” by points wanted by Emmanuel Macron is heading for a new record. Now longer than that of 1995 in transport (22 days), the conflict could exceed the 28 days reached in 1986-1987 at the SNCF, also without Christmas break. Especially since the resumption of consultations between the government and the unions and employers’ organizations is only scheduled for January 7.

In the meantime, several unions have called for demonstrations on Saturday December 28 in many cities, such as Paris, Rennes, Le Mans, Nancy or Saint-Etienne. In the capital, the interprofessional event organized by the CGT, FO, Solidaires and FSU regional unions left the Gare du Nord at 1 p.m. Still in Paris, around 300 “yellow vests” also left the Place de la Bourse at the end of the morning, holding up signs proclaiming “Pivotal age, tomb age” or “Strike, blockage, Macron releases”.

Article reserved for our subscribers Read also Pension reform: “The movement can find a second wind as the determination seems strong”

“There is better,” says Borne

An improvement highlighted by the Minister for Energy Transition, Elisabeth Borne, noting that there is “The best” in the circulation of SNCF trains. “Today, there is better, with 20% more trains. And there are still places “, the minister said during a press briefing with the Secretary of State for Transport, Jean-Baptiste Djebbari, after the visit to the SNCF National Center for Railway Operations, near the Gare de l’Est in Paris. “What we can say today is that there are 800,000 places available this weekend and at this point 500,000 travelers. that means there are places on the trains for those who need to travel this weekend “, she added.

See Also:  The ERC executive summons the National Council for January 2 to ratify Sanchez's abstention
Article reserved for our subscribers Read also Pensions: the executive facing the risk of getting bogged down

Djebbari, for his part, estimated that an average of 1.5 million people take the train on a crossover weekend like this between the holidays. “Despite the offer that is now produced by SNCF, a large number of trains are partially filled”, he explained. “On conventional TGVs, we have trains that are sometimes partially empty and that sometimes surprise customers”, he said.

Djebbari assured that the government was negotiating “Loyally” with unions since 1st October, but he criticized the CGT for its “Systematic opposition”, in contrast to what he presented as “More constructive unionism” from the CFDT and the UNSA railways.

Asked about her controversial stay during the Christmas holidays in Marrakech, Morocco, Mme Terminal assured “Be mobilized”. “I joined my loved ones to spend Christmas as I think a lot of French people”, is it justified. “What seems important to me is that, wherever I am, every day, I am totally at my task, completely mobilized, in constant contact with my teams”, she said.