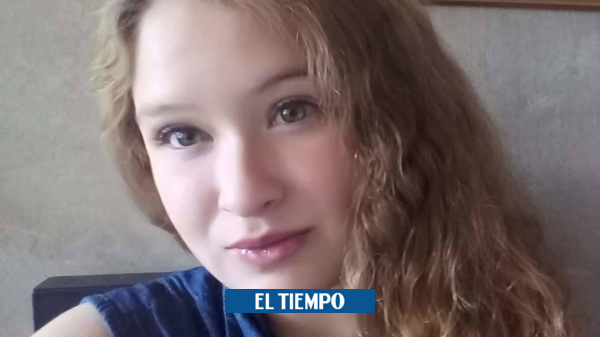 Although details are not yet known about the health conditions in which Sharick Lizeth Márquez Téllez, the 15-year-old girl who disappeared from the Santa Viviana neighborhood of the town of Ciudad Bolívar on November 18, 2020, EL TIEMPO was able to establish that she was found alive in the municipality of Silvania (Cundinamarca) after an intense search by professionals from the Sijín Search Unit.

(Further: They falsified baby food and cleaning products in Bogotá).

For almost nine days a family said they remained in suspense due to the lack of news about the young woman who had just turned 15 years old. Until yesterday there was no trace of his whereabouts. Today it is known that he is under the supervision of the Children’s Commissioner of that municipality while it is determined what really happened.

The authorities are investigating the reason for the girl voluntarily arrived at her maternal grandmother’s house seeking refuge and protection.

Orlando Antonio Márquez, her father, said that the day his daughter disappeared, he and his wife went to work and left the girl sleeping at home. “My wife is a security guard and I, an escort, so we both had to go out to do our work.”

Read also: He lost the Mayor’s Office and would have ordered the murder of the winner.

The mother of the minor called her that same day around eight in the morning. “In that communication he told his mother that he was going to go to a friend who lives in the same neighborhood. He said it was to do homework and school work, and then he would return home, “said Antonio.

See Also:  from Saturday the time restrictions in Province are eliminated

Everything seemed to indicate that the young woman had reached the door of the house where her study partner resided and knocked on her door. “We know that this happened because her mother called her again and the girl told her that no one had opened it for her and that is why she was returning home. He told his mother that through a WhatsApp chat, ”said Márquez.

From that moment on, the trail had been lost. The mother wrote to her again at nine in the morning, and the young woman did not answer. Twelve o’clock passed, two in the afternoon, and the minor’s parents began to feel anguish when they had no contact with Sharick Lizeth.

Read also: Why was it decided that phase II of the subway should be for 72.

Only at seven in the evening did they arrive at his house and begin the search. They inquired in the neighborhood, spoke with their friends from school, reported everything to the police, but time was wasted, no one had information about his whereabouts.

Then they printed posters with his photograph and his mother circulated a moving video, full of tears, on social networks, in which he asked for help to find his whereabouts. “My daughter is a sensible girl, very active, very sociable. She is a good student and dreams of being able to study medicine and help people ”.

Sharick finished ninth grade on Tuesday. “She did so well that she raised the flag at school and they had given her a diploma,” said her mother, who has not stopped the search for the minor. After days and nights of going to one place and another asking about their daughter, the couple filed a complaint with the Prosecutor’s Office, and the case was taken by the Sijín Disappearance Unit.

See Also:  Where are the flood victims in Villeneuve-lès-Béziers?

(Keep reading: Police save from dying after shot in the chest).

The anguish over the lack of news of the young woman was added the information that this family obtained from anonymous calls, from people who did not give an exact location of the adolescent’s whereabouts. “Most said they had seen her in Bosa; others, that on May Day, but we, with my wife, went looking for her and nothing.

Following these clues, the investigators traveled with the family to different areas, collecting the images captured by the video cameras where the young woman may have passed. Apparently all these actions managed to find his whereabouts.

The case of a disappeared young woman that moves Bogotá.