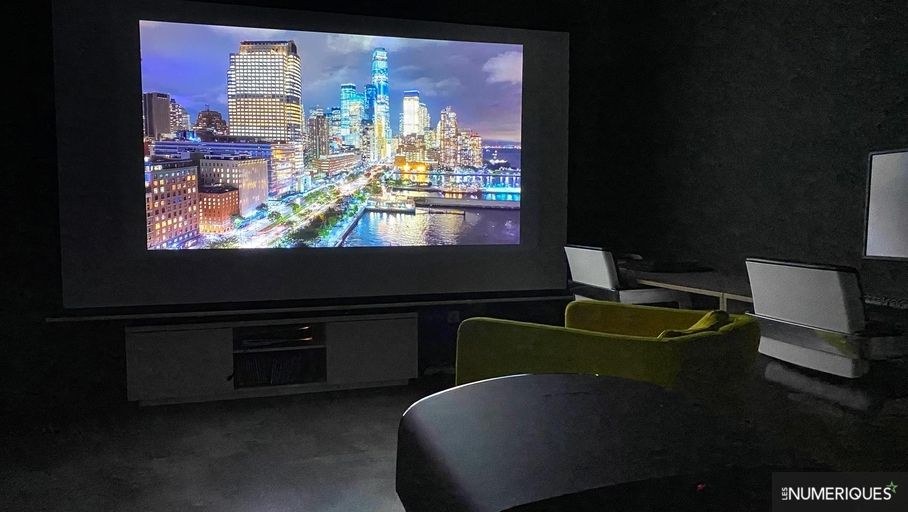 In terms of design, no change since the new Sony VPL-VW290ES looks like its predecessor – the excellent VW270ES tested in 2018. The changes are inside, with the integration of the Sony X1 video processing processor suitable for video projection. The latter is now responsible for the scaling that allows you to display SD, HD and Full HD content on this 4K SXRD chip thanks to the Sony Reality Creation engine. Already at work on the televisions of the Japanese manufacturer, this motor is very powerful and makes it possible to improve the sharpness of the objects and the microcontrast.

The other characteristics are very close to those of the previous model. We thus find the famous 4K SXRD chip displaying a native definition of 4096 x 2160 px, the true definition of 4K Cinema, an ultra high pressure lamp of 225 W allowing to display a brightness of 1500 lumens with a lifespan of approximately 6000 hours in eco mode (low) and low operating noise (26 dB (A)). The Sony VW290ES and its predecessor are among the very few projectors to have a native 4K chip on board. In fact, DLP Ultra HD video projectors like the Samsung The Premiere (LSP9T) where the Vava 4K UST Laser Projector that we tested use a 0.47 “or 0.66” DLP chip with a native resolution of 1920 x 1080 px and using the wobulation 240 Hz or 120 Hz to display an Ultra HD image at 60 Hz.

Successor of the Sony VPL-VW260ES and Sony VW270ES, the Sony VPL-VW290ES still offers excellent image quality and very good contrast. The optical part remains unchanged. There is a motorized zoom that can display a base image between 107 and 224 cm with a distance of 3 m and the impressive lens-shift which allows the image to be moved more or less 70 cm in height (from -85% to + 8%) and more or less 62 cm to the sides (from -31% to + 31%) without distortion. For our measurements, the video projector is always placed 3 m from the wall with an image of 2 m base.

The gamma curve (in gray) aligns almost perfectly with the reference curve (in yellow). The mean measured at 2.16 is also very close to the reference value (2.2). As a result, gray levels are particularly well reproduced.

The same goes for the color temperature. The curve is stable over the entire spectrum and the average measured at 6865 K is very close to the reference value (6500 K), for a perfect rendering, neither too hot nor too cold.

The contrast ratio measured at 2820: 1 is still among the best readings on a projector, but it is a little behind the ratio of 3620: 1 measured on the Sony VW270ES. This difference is explained by the peak brightness of only 135 cd / m², against 173 cd / m² on the VW270ES. As proof, the black level remains identical on the two video projectors (0.05 cd / m²). In practice, the Sony VW290ES displays very deep blacks which make it possible to almost completely eliminate the light frame.

The Sony VPL-VW290ES inherits the Sony X1 video processor already at work on televisions from the Japanese manufacturer. It uses Sony’s Reality Creation engine which scales from Full HD to UHD. The rendering is very good, the accentuation of the contours is well controlled, without exaggeration or adding imperfections. By default, the scaling is soft and it is by playing with the Creation of Reality engine (X-Reality Pro) that it is possible to achieve a more aggressive scaling. The MotionFlow motion compensation engine is still very good for a projector, but remains a step behind that found on the manufacturer’s TVs. There is thus a slight blur behind moving objects and it is unable to perfectly smooth objects, probably due to the lack of a backlight scanning system to deceive retinal persistence. We expected a more impressive gain between the processing of the VW270ES and that of the VW290ES.

The “Entry delay reduction” option reduces the display delay to 35 ms. This mode eliminates the need for image processing, in particular motion compensation, while retaining the image settings in terms of colorimetry, gamma and temperature. It is therefore possible to play with correct colors, which is always appreciable. This input lag of 35 ms results in an offset of a little more than 2 images per second compared to the source; a very low value, which makes it possible to play in good conditions over a very large diagonal.

As is often the case with video projectors, the HDR rendering is rather conservative since the displayed brightness (in gray) is systematically slightly lower than that requested (in yellow). Despite this slight shift, the EOTF curve is rather well followed. The peak brightness is measured at 162 cd / m², a very good value for a video projector.

This video projector is imposing … very imposing. It measures 49.6 x 46.4 x 20.5 cm for a mass of 14 kg. In comparison, a video projector like the BenQ W1090 (34.6 x 21.4 x 10.1 cm for 2.75 kg) appears compact. It is necessary to clearly foresee the place and a solid support to install this model. Fortunately, the lens-shift High performance facilitates off-axis positioning of the projector without distorting the image, and the powerful zoom allows placement far enough from the wall or projection screen.

The side buttons allow the projector to be used without the remote control: power on, choice of source, lens-shift (zoom and focus), menu and directional cross for settings.

Below, there are adjustable feet at the front of the projector to correct the attitude and three screw threads for fixing to the ceiling or to a specific support.

On the other side, there is the connection which consists of two HDMI 2.0b inputs compatible with HDCP 2.2. Next to it are a USB 2.0 port, an Ethernet port, a 12 V switch for controlling a motorized screen, an RS-232 port (home automation integration) and a connector for an optional infrared receiver – useful when both receivers integrated at the front and at the back are masked. The video projector ignores the interesting functions of HDMI 2.1, such as VRR (prevents tearing of the image during vertical synchronization), ALLM (automatically reduces display delay) or even eARC (lossless audio return via HDMI).

The Sony VW290ES takes over the remote control of the VW270ES. Quite imposing, but very versatile, this remote control is pleasant to use thanks to its many direct access keys to the various settings (source, sharpness, contrast, brightness, temperature, gamma, 3D, etc.) as well as to the settings of the lens-shift, zoom and focus. The rubber keys are very pleasant and do not make noise. Finally, all the keys are backlit and, last but not least, the dedicated backlight key is phosphorescent.

The Sony 4K VPL-VW290ES is hands down one of the best 4K Ultra HD projectors, if not simply the best. It delivers a perfectly calibrated image, deep blacks, an appreciable HDR rendering, embeds a versatile motorized optics and even displays 3D compatibility for lovers of relief. The fact remains that this is expensive to pay and, for us, the price difference with the Sony VW270ES is not completely justified; it is better to turn to the latter as long as it is available.