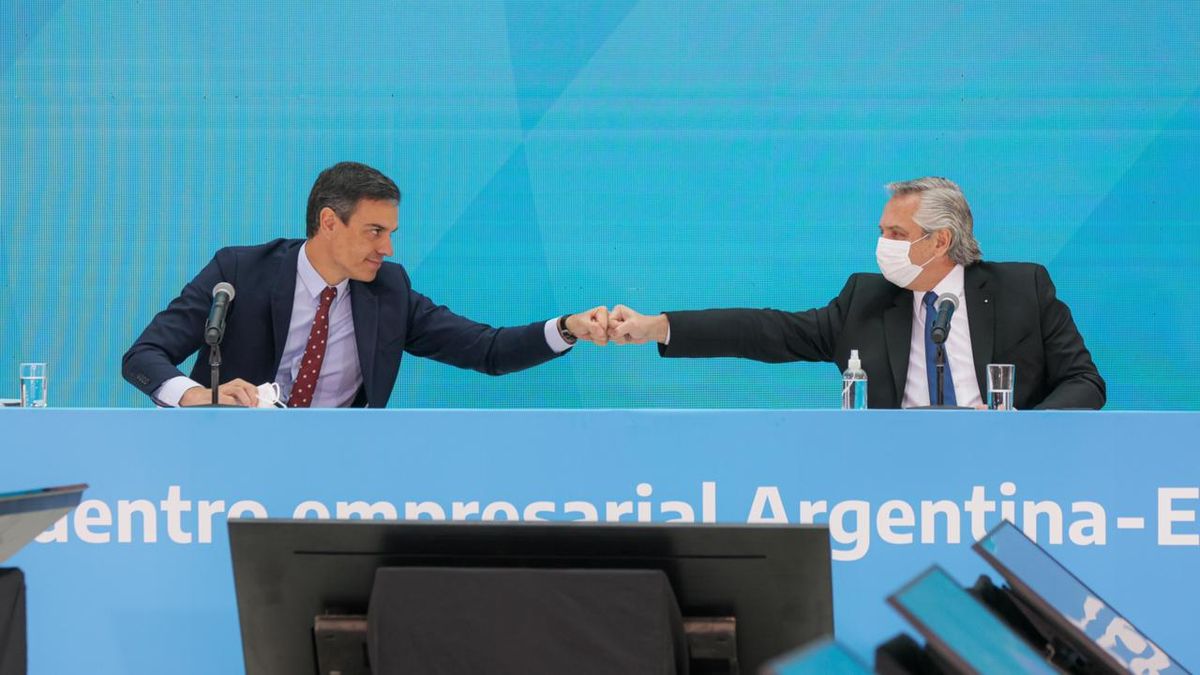 “We will always be by the side of Argentina in its conversations with the IMF and the Paris Club, The support is absolute and total”Sanchez said.

In addition, the Spanish president offered his support to the management of the pandemic carried out by the Argentine Government: “I want to support the measures that President Alberto Fernández has taken to defend public health and the lives of his compatriots. These are very difficult moments, with complex decisions to take on “.

In turn, Fernández thanked Spain for its support and took the opportunity to address the businessmen present by stating that both countries face a “unique opportunity” to strengthen their bilateral relationship.

“I want to thank the Government of Spain for all the times that I required their help to face the most critical moments when we assumed. They were always on our side, accompanying us and attending to our claims on the issue of debt”said the Argentine President.

“We have all the conditions given for Spain and Argentina to join forces and take advantage of opportunities,” said the president.

After the summit at the Bicentennial Museum, both leaders will hold a bilateral meeting, in the framework of which they will sign a series of agreements.

Accompanied by a large delegation of officials, businessmen and union members, Sánchez arrived at the Casa Rosada esplanade at 10:30 am, where he was received by Alberto Fernández. After the greeting and the formal photo, both leaders shared a meeting alone as a welcome, which lasted forty minutes.

Immediately afterwards, Fernández led the Spaniard to the Bicentennial Museum, where a meeting was held with businessmen from both countries. Before the summit begins, the Argentine president showed Sánchez the facilities of “Plastic Exercise” the work of David Siqueiros that was restored in 2008.

Sánchez arrived in Argentina on an official flight, accompanied by Maria Reyes Maroto Illera, Minister of Industry, Commerce and Tourism; Cristina Gallach Figueras, Secretary of State for Foreign Affairs and for Ibero-America and the Caribbean and Manuel de la Rocha Vazquez, Secretary General for Economic Affairs and G20 of the Cabinet of the Presidency of the Government.

As indicated by the Presidency in a statement, “A dozen businessmen with significant investments in Argentina, and two leaders of trade union centrals, traveled with the Spanish president.”

In the afternoon, Pedro Sánchez will visit the old Navy Mechanics School (ESMA), today converted into the Site of Memory Museum.

According to the official agenda released by the Spanish government, at 17:00 a tribute will be held to the Spanish disappeared in Argentina, in the Garden of the Embassy of Spain.

Once the activities in Buenos Aires are concluded, the official delegation will go to the Ezeiza International Airport towards Costa Rica.