The current pictures from the USA show it more and more clearly: America is divided, it threatens to break apart. The US President does not care about protecting the health of his population, but sees the corona pandemic solely from the point of view of “re-election” and “the economy must make profits again”. As his Heartland supporters militantly protest anti-infection regulations, poor people and people of color are dying disproportionately. A disaster for the formerly most powerful country in the world.

If Steve Earle his new album The Gosts Of West Virginia worked out and recorded, the Corona catastrophe was not yet to be thought of. But the division was there. Steve Earle, left-wing country singer-songwriter, did not want to accept that the miners, who played an important role in the history of progressive America through hard labor struggles such as the “Harlan County War” in Kentucky in the 1930s, were now in the opposing political camps.

West Virginia, like Kentucky, is one of the coal districts of the USA. Once vital to the US economic system, the industry is now a dying industry. The result: Unemployment and a lack of prospects prevail where proud miners used to live in relative social security after successful labor disputes. And although Trump is a representative of the ruling business elite, a large proportion of the region’s residents are his voters and hope for his “America First” policies.

That’s where Earle started. He didn’t want to insult these Trump voters as racists or right-wingers, but rather to take their concerns seriously: the miners’ dwindling pride, unemployment, the worry of “being worthless”, poverty and a lack of prospects. The practices of the mining companies: Poor safety standards in the mines and anti-union behavior when the miners do try to represent their interests, which they often shy away from for fear of unemployment.

The socialist Earl is concerned with entering into a dialogue with these people. So he picked up a topic that has burned itself into people’s minds in West Virginia: The “Upper Big Branch Disaster” on April 5, 2010, one of the largest mining accidents in US history, in which 29 miners lost their lives. He wrote some of the songs for the theater play “Coal Country”, as well as other pieces about the people and the region as well as the traditional John Henry.

In Union, God And Country, he takes on the challenging task of embracing these people’s perspectives, and while he doesn’t share their political views, still treat them with respect. With a brisk bluegrass folk he succeeds credibly and honestly. “Devil Put The Coal In The Ground” is a dark lament about the harsh working conditions in the mine. Of course, “John Henry”, the age-old folk song about the fight between man and machine, fits very well into the context of the content. Other highlights on the album are “It’s About Blood”, “Black Lung” and “The Mine”, all of which ruthlessly describe the reality of life in the mining area.

Rarely since Merle Travis’ groundbreaking album “Folksongs Of The Hills” has the life of the miners been portrayed so vividly and musically gripping by a country musician. Again he is supported on the long player by his “Dukes”. In particular, Eleanor Whitmore’s crystal-clear vocals on “Heaven Ain’t Goin’ Nowhere” or “If I Could See Your Face Again” create the appropriate melancholic atmosphere.

Conclusion: Even if no commercial laurels can be expected from this album and in view of the Corona crisis it will not get the attention it deserves, it underlines Steve Earle’s exceptional position as a socially empathetic and committed country singer-songwriter who always combines his concerns with strong music . 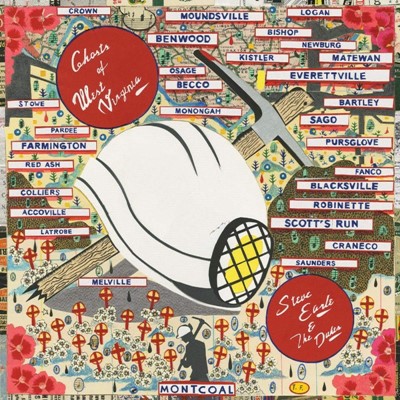 Trackliste: (The Ghosts Of West Virginia)

The super dollar rises, but is heading for its worst quarter in 12 years