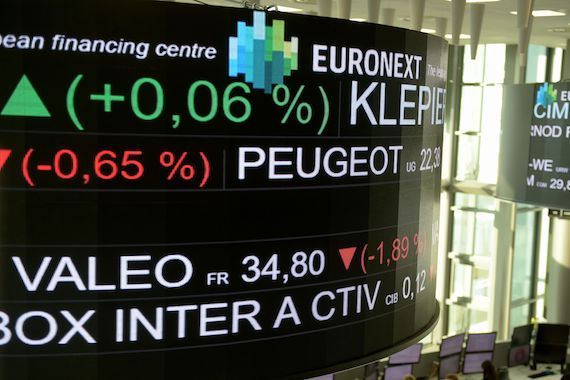 Wall Street was expected to decline slightly at the opening, after closing in the red of the Asian markets, while the European stock markets are sailing in the wrong direction showing solid gains.

In Asia, markets retreated amid concerns about the repercussions of a bankruptcy by Chinese real estate giant Evergrande. The Macao government’s public consultation aimed at greater political control over the gaming industry and poor Chinese economic statistics released on Wednesday add to the pessimism surrounding it.

“Market players are becoming more cautious and reacting to events in China and the changing economy in the United States with more profit taking,” said Andreas Lipkow, analyst at Comdirect.

“US data is once again the center of attention and should trigger reactions in the equity markets,” he predicts.

This Thursday, statistics are actually expected in the United States on retail sales in August, weekly claims for unemployment benefit and the manufacturing index for the Philadelphia region.

For Ipek Ozkardeskaya, analyst at Swissquote, retail sales “could reveal a monthly drop of 0.8% in August. But weak data should hardly undermine morale, after appeasement of fears “linked to the reduction in support from the US Federal Reserve (Fed), allowed by” Tuesday’s US inflation figures “, which came out lower than ‘expected.

Another source of concern could be the sharp rise in energy prices, particularly in France and the United Kingdom, but also in the rest of the world, mainly due to the post-COVID economic recovery.

In the geopolitical field, the United States, which seeks to strengthen its alliances in all directions vis-à-vis China, announced Wednesday with Australia and the United Kingdom a vast security partnership in the Indo-Pacific area.

A speech by the President of the European Central Bank (ECB), Christine Lagarde, to the French business school HEC, completes the agenda.

L’action Lagardère soared 19.24% to 23.24 euros, the day after an announcement by the media giant Vivendi, which intends to launch a takeover bid on the Lagardère group, in addition to the buyback of the shares (18%) of the Amber Capital fund.

Thales not worried Thales (+ 0.88% to 82.60 euros) has confirmed its financial objectives despite the breach by Australia of the contract for the supply by France of 12 submarines in which the defense electronics technician was implied.

As a result of a vast security partnership sealed between the United States, the United Kingdom and Australia, Canberra announced breaking the € 31 billion framework contract between Australia and France Naval Group, dont Thales is a 35% shareholder.

British channel Marks and Spencer announced the closure of 11 stores in France “over the next few months”, or more than half of its 20 sites in the country, due to supply problems linked to Brexit. The title lost 1.50% to 183.55 pence.