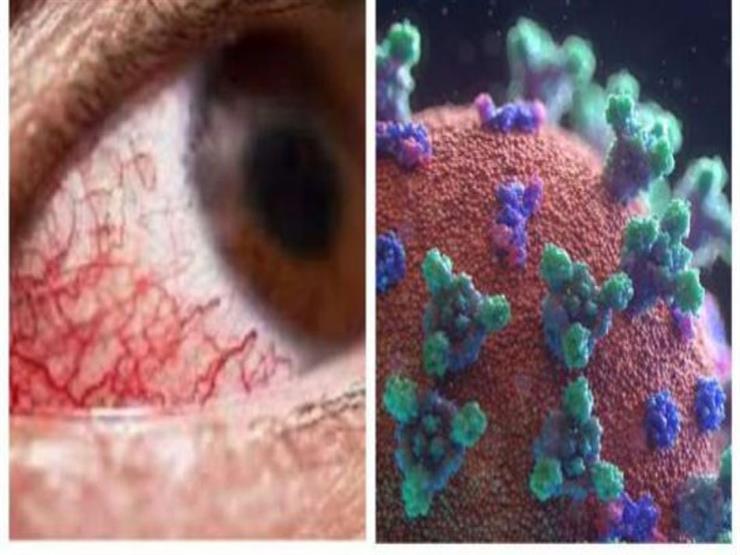 An official report prepared by the Ministry of Health revealed details of the black fungus disease in Egypt, including what is related to the definition of the disease, sources of infection, diagnosis, and treatment methods.

The report, prepared by the Ministry’s Infection Control Department, and obtained by Masrawy, defined black fungus as a fungal disease that affects humans as a side effect of the deterioration of the immune system, but it is rare and usually affects the mucous membranes lining the sinuses, eyes, nose, mouth, teeth or facial bones.

The fungi may also extend to the lungs, digestive system, or even blood vessels. It can also occur on the skin when a cut, burn, or other injury occurs to the skin.

Other less common types are cutaneous and gastrointestinal infections.

As for the fungi that cause the disease, they are some types of fungi belonging to the family of molds, which live in moist environments such as soil or decomposing organic matter such as leaves, fertilizers, or wood, and these fungi are called mucous fungi.

The report mentioned the sources of infection, which are heat-resistant fungi, which are found in the environment, and studies conducted by taking environmental samples indicate that these fungi are commonly found in the soil, but rarely in air samples that are tested for the presence of fungal spores.

Modes of transmission occur through inhalation, contact, and ingestion.

As for people exposed to black fungus, they are:

– Patients with uncontrolled diabetes who are affected by its severe complications, especially diabetic coma accompanied by acidity of the blood.

Patients who have received organ or stem cell transplantation.

Excessive use of corticosteroids for long periods of time

The report indicated that the transmission of infection within the health facility occurs through inhalation of fungi from the humid and unclean environment inside the health facility, through the provision of medical services related to health care such as “the use of non-sterile water loaded with fungi during oxygen sessions, the failure to maintain air conditioners and filters, and the use of medical devices.” Not sterilized.”

Contact transmission of the black fungus also occurs through the combined use of plaster bandages and wooden tongue depressors without using anti-contamination methods, hospital furniture, unsafe handling of surfaces contaminated with dust and dirt, and then contact with exposed patients.

Transmission by ingestion of infectious fungi can also occur.

The report emphasized that black fungus is a non-contagious disease and is not transmitted from one person to another or between humans and animals.

Symptoms, depending on where the fungus grows, include fever, cough, chest pain, shortness of breath, swelling on the side of the face, headache, sinus congestion, abdominal pain, vomiting, nausea, gastrointestinal bleeding, blood in the stool, diarrhea, and may Some complications such as blindness, strokes, nerve damage, and loss of consciousness occur.

The report indicated that if the disease is not controlled, and treatment is not started early, it can cause a death rate of 20 to 50 percent for people with severe symptoms, depending on the type of fungus that causes the disease and the part of the body affected.

The disease can be treated with antifungal medications under medical supervision, and the treatment period lasts from 4 to 6 weeks, and sometimes its treatment may require surgery to remove dead or infected tissue, such as removing the eyes or upper jaw to stop the spread of infection. 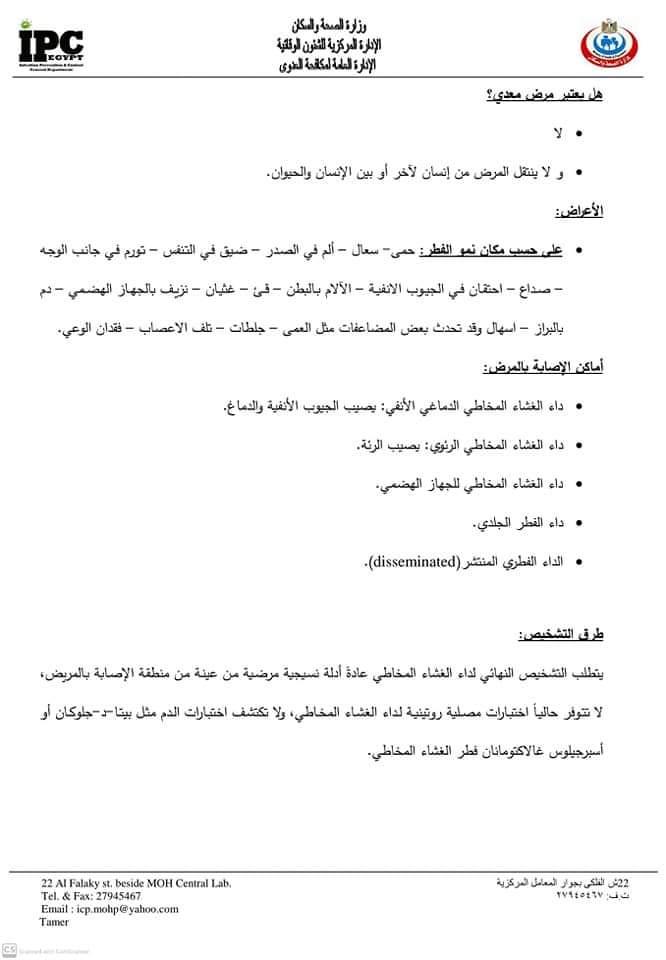 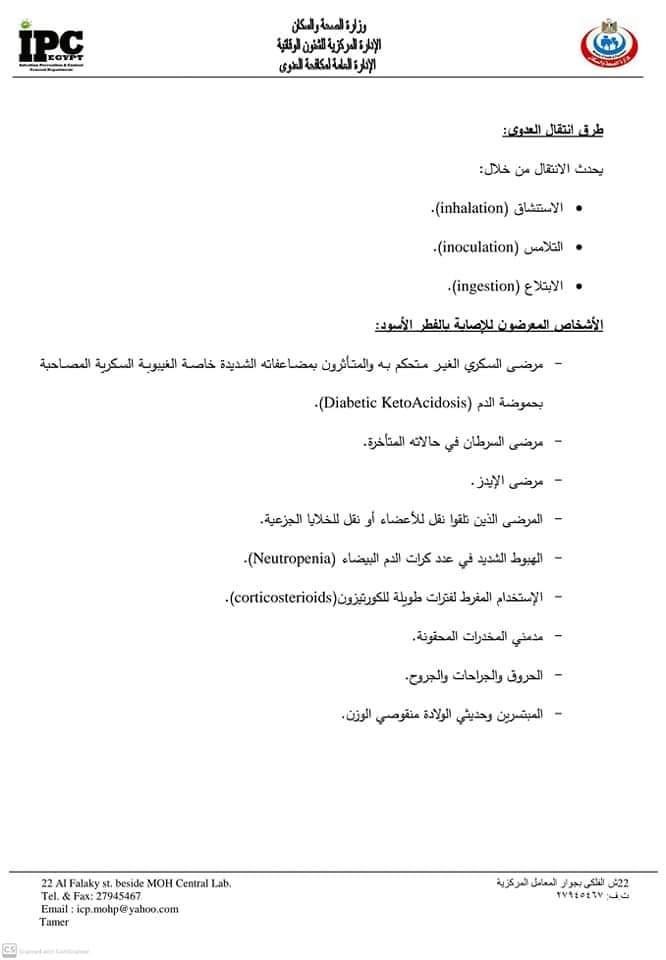 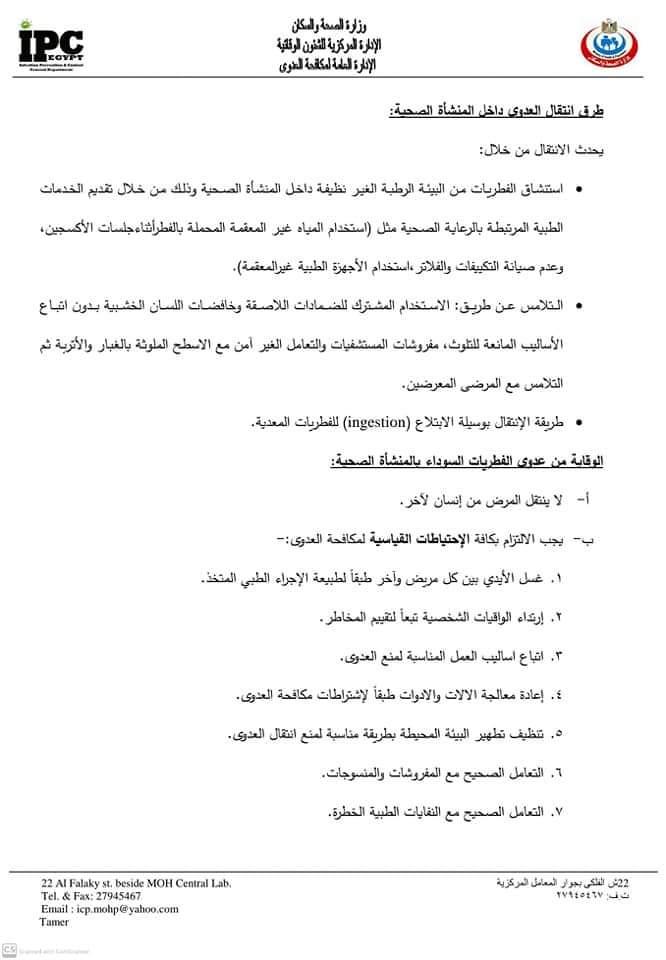 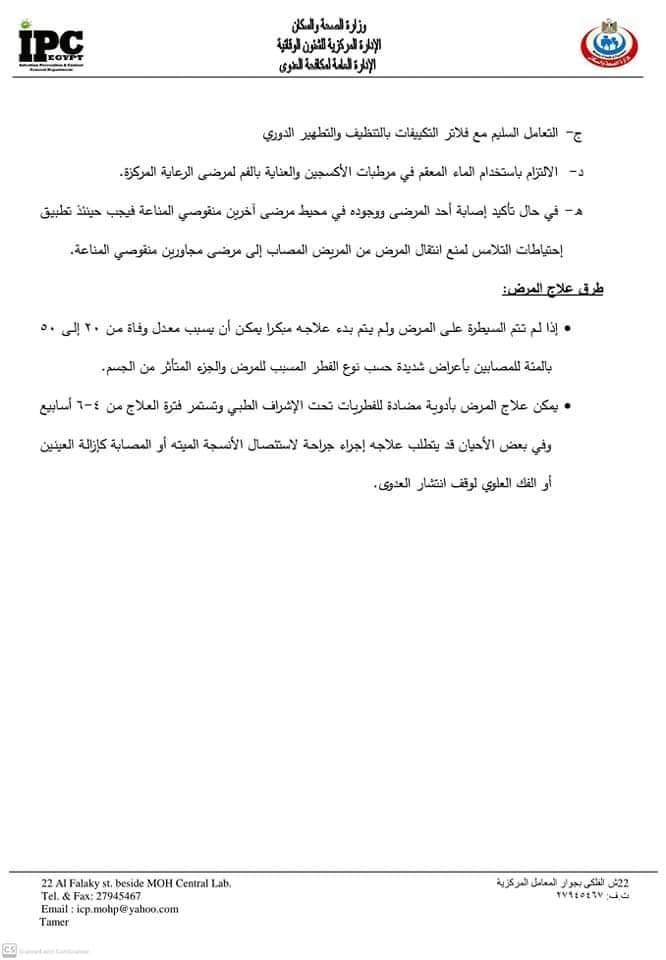