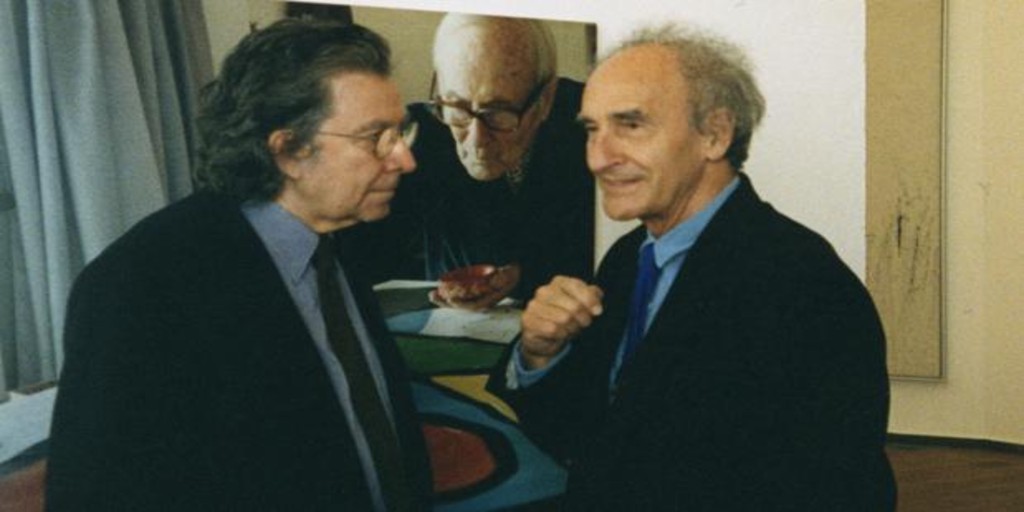 Chillida Leku This year begins a new exhibition line with a program of invited artists whose work brings us closer to the universe of Eduardo Chillida (1924-2002). This new project starts with ‘Tàpies in Zabalaga’, an exhibition in tribute to the Catalan creator Antoni Tàpies (1923-2012) whose work, like that of the Basque sculptor, left a profound mark on the evolution of modern and contemporary art.

The exhibition, sponsored by the Iberdrola Spain Foundation, which has provided two works for the exhibition –’Vuit creus’ [Ocho cruces] (1981) and ‘Leaf Footprints’ [Huellas de hoja] (1982) – unfolds on the upper floor of the Zabalaga farmhouse and you can visit until January 10, 2022. It is made up of a selection of small and large-format works, mainly sculptures, dated between the 80s and 90s. In this way, they establish a direct dialogue with the Zabalaga farmhouse itself, a space that was restored by the artist from San Sebastian. The sample has the collaboration with the Antoni Tàpies Foundation and the Tapiès family, as well as with loans from various private collections.

“It is a great responsibility for us to open the museum to other artists,” he says. Mireia Massagué, director of Chillida Leku and curator of the exhibition. Without a doubt, the work and the figure of Antoni Tàpies are perfect to establish a dialogue with the historical legacy of Eduardo Chillida and this exhibition is rooted in the common principles that guided the life and artistic practice of both ”. He comments that «only Tàpies could be the first artist to dialogue with Chillida’s work in the Zabalaga farmhouse. It could not be another ». He explains it like this: “It could only be him for many reasons, not just because of countless times they matched (at the 1958 Venice Biennale, at Europalia in 1986, at the Maeght gallery or at the Saint-Paul-de-Vence workshops), but because both they traveled the same roads, even if they did it in different ways. If there is something that unites these two artists above all else, it is the respect they felt for the matter, which they treated in a very different way, but always as something alive, transcending it, bringing together in it the philosophical, vital, spiritual principles that moved them both ».

The work of these artists, emphasizes the director of Chillida Leku, “not only dialogues with each other, but also with the village itself, which was restored by Eduardo Chillida, and which is one more work of the San Sebastian sculptor. The link between the work of the two artists is almost palpable, as if we were witnessing a conversation of the many that they kept alive. This enthusiasm that I feel when I contemplate the exhibition, I also see it and I have drank it from the families of both sculptors who, together with the team of the Antoni Tàpies Foundation and Chillida Leku, have lived with enthusiasm the entire process of materialization of this exhibition . Tàpies’ works help us to expand Eduardo Chillida’s universe, to get closer to him in ways we have never done before. His figure grows alongside that of the Catalan artist and vice versa ».

There’s a extraordinary parallelism in life trajectories of these two great figures of 20th century art. The biographies of Antoni Tàpies and Eduardo Chillida have several points in common and present parallel itineraries that converge in diverse historical and creative moments. This exhibition not only delves into these points, but also into those others that marked the non-transferable personality of each of the artists.

The material with which a large part of the sculptures that make up the exhibition are made is chamotte land, which acts as a connecting link between the two. It was in 1981 when Tàpies began to experiment with the possibilities of this technique in the ceramist’s workshop. Hans Spinner. At this time, the Catalan artist received several invitations to go to work on ceramics at the gallery owner Aimé Maeght’s workshop in Saint-Paul-de-Vence (France). Eduardo Chillida, who had discovered this material in those same ovens, then insisted Tàpies to accept the invitation and be encouraged to work with the chamotte soil. This is when the production of cooked clay begins.

The relationship between Tàpies and Chillida is also consolidated on a theoretical level: in their dealings with matter and their desire to transcend it as a path towards spirituality, in the presence de philosophy and poetry in his works or in the interest for the oriental spiritualism. All this crystallizes in a humanistic approach of artistic work with which both artists underlined the transformative capacity of art. The selection of works, some of which can be seen for the first time outside the Antoni Tàpies Foundation, highlights the artist’s own and distinctive language and allows the public who approaches the Zabalaga farmhouse to also discover the Catalan artist’s iconographic repertoire .