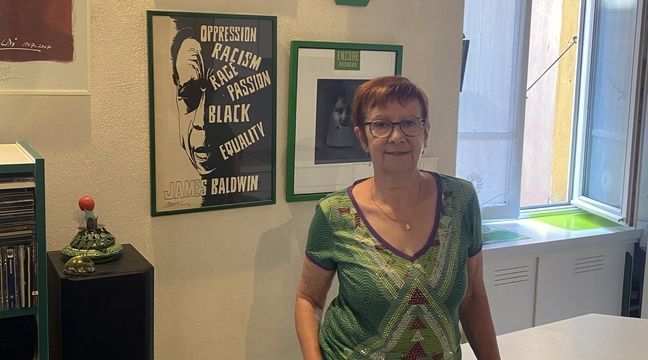 “It was important to pay tribute to these everyday heroes. There have been so many beautiful stories there, adoptions, mutual help, coming from people who had never done this before, “says Teresa Maffeis, hoarse voice, steaming coffee in hand, sitting on her sofa.

This Niçoise by adoption, of Italian origin, red hair, dressed in green otherwise “we would not recognize her anymore”, she explains amused, is co-author of the book The Sentinels, Chronicles of the Fraternity in Ventimiglia, a logbook released on June 18, which traces five years of engagement with migrants stranded on the Franco-Italian border. This release date is not trivial, almost symbolic. In June 2015, the Franco-Italian border was closed, preventing migrants from crossing into France.

“Heroes of flesh and blood”

Since then, the one who created in 1991 the Association for Democracy in Nice (AdN) and which fights against all forms of exclusion has continued to go to Ventimiglia to distribute clothes, food and a little cheerfulness in the lives of those who have left their country. “I never ask them what happened to them. They often have a difficult, bloody journey, which they try to forget. You know, before leaving, women put on contraceptive patches because they know they will be raped. So when we are with them, we try to make them laugh, ”explains Teresa.

This story of “heroes of flesh and blood”, she writes in the foreword, is in the first person. “It was relevant. She is the red thread of this book, finally the “green thread”. For this book, I started in his footsteps. Sometimes I have been overtaken by my professional and personal life. But it does not matter because you know that even if you are not there for a while, she will always be there. She is consistent in her Teresa commitment. It’s in its DNA, ”says Aurélie Selvi, journalist and co-author of the book. “When there were problems at the Italian border, she continued to help undocumented migrants and the education of Roma children. She doesn’t give up. She puts herself at the service of others and sometimes, she forgets herself a little ”, describes the one who has become her friend.

“Nothing is moving because there is no political will”

“I just help people in need that’s all,” says Teresa when asked how she manages everything. “People think I only do that. But I also go to exhibitions, I go to see movies, I travel. I live what, I have time. So I give it to others ”. “My parents were Italian immigrants. I am very sensitive to rejection. My father was poor and you felt that you were not like everyone else, ”she says. A need for justice in the face of difficult situations far from discouraging her: “I have a lot of pain, not anger. That revolts me. But nothing is moving because there is no political will for it. Humans will never arrive first. But we never give up. “

Tenacity and strength despite stories that sometimes prevent him from falling asleep. “There are things I think about all the time. This young girl, Milette, who is mentioned in the book. Dead under a truck. I have an obsession with her mother, who receives her daughter’s coffin, what she felt, that does not leave me. Or this migrant, laughing, who shaved “Paris” on the head, hopeful. I think of him and I don’t know what has become of him, ”recalls Teresa Maffeis.

And if the book traces five years of commitment, his is not finished. Since the end of confinement and the reopening of the border with Italy, Teresa has returned to Ventimiglia, to the Red Cross camp. “It’s complicated right now. The camp may disappear even after it had temporarily closed during confinement after a detected case of Covid-19 “, she worries, more talkative when it comes to talking about the difficulties against which We have to fight.

VAT tripled in Saudi Arabia, preceded by a buying spree