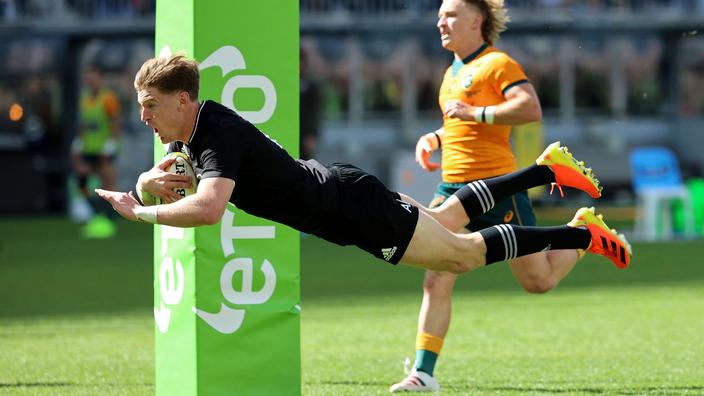 New Zealand once again won against Australia this Sunday (38-21) to take the lead in the Rugby Championship.

New Zealand ruthless with Australia. The All Blacks have preserved their invincibility this year by inflicting a third loss in three matches (38-21) to their eternal rivals the Wallabies, Sunday in Perth, in a late match of the second day of the Rugby Championship. This success six tries to three, with the bonus to the key, comes on top of the two won last month against Australia, first narrowly beaten (33-25) then submerged (57-22) mid- August in Auckland by intractable New Zealanders in 2021. The triple world champions (1987, 2011, 2015) have won the six matches played since early July, including that against a Tongan selection bis (102-0) and both ahead of Fiji (57-23 then 60-13).

The reunion with Australia turned into a one-sided duel. Coach David Rennie may well say that his team was better than the slap received in New Zealand, the Wallabies have still suffered a lot, and accumulated many blunders. They were refused two tries in a first period largely dominated by the All Blacks (18-0), however reduced to fourteen after the red card received by the back Jordie Barrett for a kick in the face of Marika Koroibete after receiving a ‘a high balloon. There were, however, absences from the New Zealand side: opener Richie Mo’unga, scrum-half Aaron Smith, second row Sam Whitelock, all three of whom remained in the country for a happy event, not to mention captain Sam Cane , long-term injured. But these forfeits did not really feel for the first time as captain of number 8 Ardie Savea.

A little game at the foot of the star Beauden Barrett in the back of the Australian defense, allowed the All Blacks to create a breach in which the youngest of the Barrett siblings, Jordie, rushed to register the first try of his family . To make matters worse for the Wallabies, opener Noah Lolesio completely missed a penalty that seemed to be offered not far from the posts. The All Blacks had to play fourteen for twenty minutes before they could compensate for the absence of Jordie Barrett. In the southern hemisphere, replacement after red card is allowed. But that did not hinder their march forward in front of Wallabies still imprecise like the back Tom Banks who wasted new ammunition with a dead balloon and a try refused to Koroibete for having crawled. In the process, the All Blacks drove the nail on the ball carried concluded by David Havili, who scored the first of his two tries, just before the break.

The All Blacks take the lead

Upon returning from the locker room, the Wallabies rebelled. Their hooker Folau Fainga’a found the loophole, while, paradoxically, the New Zealanders were no longer outnumbered. Scrum-half Nic White, who entered the second half, also flattened before Banks’ third try. But it was only an illusion for the Wallabies. The All Blacks added four tries to their nest egg by scoring, most often, on the counterattack. The gap would have been greater with fewer misfires in front of the poles. With this convincing victory, they take the lead in the Rugby Championship, ahead of the South African world champions. Next Sunday, the All Blacks will cross paths with Argentina, which inflicted a historic defeat on them last year in the same tournament. The Australians will come up against the Springboks with the ambition of finally registering their first points in the standings.