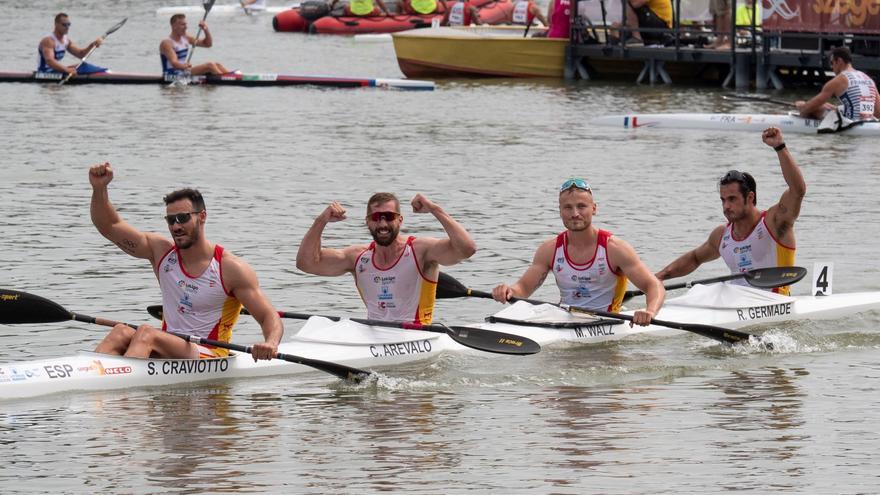 Craviotto, Cooper Walz, Arévalo and Germade will be part of the K4 in Tokyo.
EFE

With Saúl Craviotto, the standard-bearer of the national delegation together with Mireia Belmonte, and Maialen Chourraut as banners, the Spanish army of canoeing in Tokyo 2020 ready to be the protagonist again with well-founded hopes of getting on the podium.

Canoeing has been the sport that has given Spain the most Olympic joys in the Games precedents. Since David Cal began in Athens 2004 his ‘harvest’ of five total medals with gold in C1 1,000 meters and silver in C1 500 and, the paddlers have shone with their own light both in the sprint modality with the Galician and Craviotto a the head as in slalom with Chourraut.

The ilerdense and the donostiarra, in fact, achieved two of the three golds of river canoeing. Craviotto with Cristian Toro at K2 200 m. (It was also bronze in k1 200m.) and Chourraut in K1 slalom. The other Olympic title in Rio went to Marcus Cooper Walz in K1 1,000 meters.

The performance in Rio 2016 was the ratification that the national canoeing enjoys a tremendous competitive health and that, apart from the controversies generated in the selection process of the flagship boat, the K4 500, the closet fund is tremendous. The results have continued to accompany the World Cups, Europeans and the World Cup and the hopes of repeating the success of the past Games, or even improving it, are founded.

The Fantastic 4, Saúl Craviotto, Marcus Cooper, Carlos Arévalo and Rodrigo Germade, they hung the gold medal in the canoeing World Cup test that was held in May in Szeged (Hungary) ahead of their theoretical great rivals in the fight for gold, who, according to the Spanish standard-bearer predicted then, they will have ‘put the batteries’.

Teresa Portela will play her sixth Games. Quite an achievement for this 39-year-old Galician world and European multi-medalist who comes with the desire to get her first Olympic podium in K1 200 after having been fifth in Athens 2004 in two events, in Beijing 2008, fourth to 198 thousandths of the medal in London 2012 and sixth in Rio.

They will open the fire nonetheless on Sunday the quartet of the slalom modality in the Kasai Canal, where Maialen Chourraut, another illustrious 38-year-old mother, seeks the most difficult still, to revalidate the Olympic title that he achieved in the channel of the Radical Park of Diodoro. Many things have changed in his life, he has returned to live ‘home’ leaving behind his residence in La Seu, but his ambition and competitive character remain unchanged in Chourraut, which is common in the finals of major competitions. Bronze also in London 2012, will play this Sunday the first qualifying of K1, as Ander Elosegi in C1.

The Irún paddler is the other veteran of the slalom team. At the age of 33, he touched the medal in Beijing 2008 and London 2012, where he was fourth, and in Rio he reached the final and finished eighth but with feelings that he could have been on the podium. It is not among the favorites but if it has the day it has the capacity to surprise.

The Segovian David Llorente attends his first Games with the endorsement of the world runner-up in K1 in 2019, edition in which he also won team gold. Despite his youth (24 years), he is already established in the elite of the specialty. Specific errors have made him not shine in the last tests of the World Cup, but he has proven to be the great hope for the present and future of the Spanish slalom.

The quartet is completed by Nuria Vilarrubla from Lleida, who at 29 years old hopes to find the Olympic endorsement after a career with World Cup and European medals. She is undoubtedly one of the contenders to fight for the medals in C1, although the great favorite in this discipline and in K1 is the Australian Jessica Fox, double world champion silver in London and bronze in Rio.