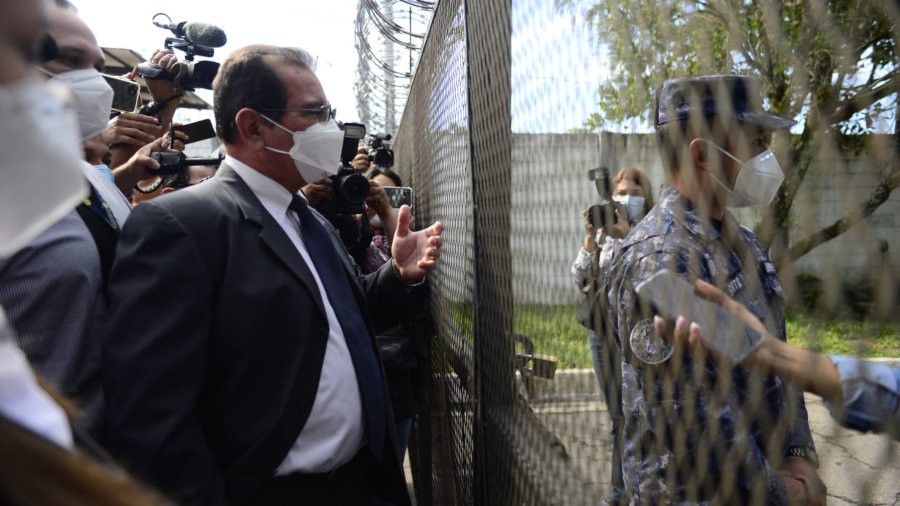 This Monday, the military again prevented the judge of the criminal process for the El Mozote massacre from carrying out the inspection. The Chamber rejects that said inspection seeks information on secret military files, as alleged by the Armed Forces

The Ministry of Defense was constitutionally disarmed to prevent the entry of the San Francisco Gotera Examining Magistrate to inspect the military archives of the case of the El Mozote massacre, after the Constitutional Chamber rejected a request for protection from that State portfolio.

The Chamber declared inadmissible the amparo filed by the Minister of National Defense, Francis Merino Monroy, against the Investigating Judge of San Francisco Gotera for the judicial resolution ordering said inspection.

The highest court considers that “the damage that the contested act (the inspection of the files on the El Mozote massacre) would have caused in the legal sphere of the Armed Forces is not observed.”

In addition, says the resolution, the arguments presented by the Minister of Defense, Francis Merino Monroy, “rather than evidence an alleged violation of constitutional rights, are reduced to raising a matter of mere legality and simple disagreement with the content of the action claimed ”.

For the second time and under the allegation of the confidentiality of the military files, the judge was blocked this Monday in his attempt to enter a military installation to inspect the military archives.

But the highest court is forceful in clarifying that it is not observed that the inspection causes an injury in the legal sphere of the Armed Forces, because, despite the fact that it is alleged that the files on which the inspection will be carried out constitute information from secret military plans It should be taken into account that the aforementioned criminal proceeding is investigating events that occurred in 1981 in the related massacre.

Personnel from the PDDH, Cristosal and other organizations on the outskirts of the Ilopango Special Forces Command, to verify the diligence of the San Francisco Gotera judge, for the inspection of the military archives of El Mozote. Photo / Jessica Orellana

“Therefore, it will be documents from that time that will be examined by the judge, so this argument cannot be an impediment to both the survivors of that massacre, the relatives of the people killed in that military operation, and society in In general, know the truth of the events that occurred at that time ”, he emphasizes.

At the same time, it reminds them that the investigation of the criminal acts that occurred in that massacre constitutes an obligation for the State of El Salvador, which has been recognized and ordered by the Inter-American Court of Human Rights, which, in its judgment of October 25, 2012.

√ READ ALSO: Salvadoran Army has no interest in justice for the El Mozote massacre, EFE publishes

In this sense, the inspection ordered of certain archives of the Armed Forces “is not intended to investigate secret military plans,” since they are not subject to the aforementioned verification.

The investigation that the judge is following, the magistrates clarify, is limited to the investigation of a criminal process to deduce the responsibilities of the members of the Armed Forces who at that historical moment participated in the so-called “Massacre of El Mozote and nearby places”.

For this reason, the magistrates emphasize, the investigation is aimed at the people who – in accordance with the investigation procedures – turn out to be the alleged perpetrators of having committed the criminal acts in the context of that massacre and not against the Armed Forces as an institution .

Second blockade by the Armed Forces

The Army once again blocked the diligence of the judge of San Francisco Gotera, Morazán, who went that Monday morning to the Air Force facilities in Ilopango due to the refusal of the authorities to allow this procedure in a first attempt on September 21 in the General Staff.

Delegates from the military institution approached the judge to expose him “That in that unit they do not have the information that you are looking for” and they argued that “It is secret confidential information that we have here, and that can only be requested by the (Legislative) Assembly”.

See Also:  Pompe's offensive statements offended the Chinese embassy. They are said to be full of Cold War ideology and ideas Home

Judge Guzmán replied that “The valuation” that are making “It is in accordance with the interests of the armed institution.” Added that “That we do not have the information is something that has to be verified through inspection.”

On September 21, the Army had already blocked Guzmán’s entry to the General Staff in San Salvador to begin the judicial process under the argument that said inspection it would endanger the safeguarding of secret documents.

CHECK HERE THE COMPLETE RESOLUTION OF THE ROOM