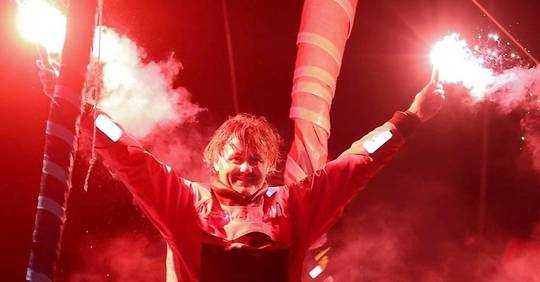 Cis what is called having flair. By becoming the official timekeeper of the Vendée Globe 2020-2021, “Everest of the Seas”, the Swiss watch manufacturer Ulysse Nardin imagined linking its name to the most uncertain finish of all the editions of the sailing round the world, solo and non-stop? If Charlie Dalin, at the helm ofApivia, crossed the line first, off Sables-d’Olonne, Wednesday evening, it was Yannick Bestaven, who arrived almost eight hours later, in the early hours of the morning, who was declared the winner of the event.

The hour of victory

This at first glance paradoxical classification is linked to what sailors call “sea fortune”, a twist of fate that landlords would rather call sea misfortune. The skipper of Master Rooster IV had in fact a bonus of ten hours and fifteen minutes granted by a jury because of the time devoted to assisting another competitor who was the victim of a shipwreck within 40is Roaring, off the Cape of Good Hope, at the end of November. Result, once this ten hours subtracted, the delay of Bestaven on Dalin finally turned into two and a half hours ahead. A minimal difference when we consider that their boats have covered more than 24,000 nautical miles (45,000 km) in 80 days of racing. And to further enhance the picture, the third, Louis Burton, on Valley Office 2, arrived less than seven hours after the first one. Even if the last sailboats still at sea are currently sailing off Brazil, the top 10 of the classification will have carried out an impressive group fire. Never seen.

History will therefore remember that Dalin crossed the finish line first and Bestaven won. A beautiful page in the legend of the open sea, sport and solidarity between sailors that will surely be remembered. Patrick Pruniaux, CEO of Ulysse Nardin, got it right by giving each of the two men a watch.

We can also point out to future participants of the Vendée Globe 2024 that taking a high-precision chronograph on board will not be superfluous as the differences are sometimes minimal. Next time to beat: 80 days, 3 hours, 44 minutes and 46 seconds.

Immediately after returning to dry land, Yannick Bestaven received a Diver Chronometer Blue, Charlie Dalin a Diver X Cap Horn. “Both have deserved to remember their Odyssey forever with just a glance at the wrist,” says one within the manufacture. The skipper ofApivia does not run any risk of forgetting one day “his” Vendée Globe since the map of the route appears in the form of an engraving on the back of his watch in black DLC titanium 44 mm in diameter, waterproof to 300 m and produced in series limited to 300 copies.

Pirate of the Caribbean and beyond

In a competition as difficult as the Vendée Globe, where we now know that the slightest second can make all the difference, we can imagine that skippers benefit from high-performance electronic installations on board their vessels, particularly in terms of time counting. But many, in the city as at the sea, wear watches linked to their nautical passion. Since 2018, Yannick Bestaven has owned a Ralf Tech WRX, for example, as have four previous Vendée Globe winners, Michel Desjoyeaux, Vincent Riou, François Gabart and Armel le Cléac’h. Particularly robust and foolproof, the models of this French brand still little known to the general public are often chosen by professional divers, elite military units and many sea racers.

So close to the first place

Unhappy actor of this 9e edition of the Vendée Globe, the German Boris Herrmann (Seaexplorer-Yacht Club de Monaco) believed until the day before the finish in his chances of finishing first. But a collision with a trawler in the final hours of the race put an end to his hopes. Finally ranked fifth, it was with his gaze riveted on the dial of his Glashütte Original SeaQ Panorama Date that he followed the last moments of his round-the-world trip. A steel watch 43.2 mm in diameter, water resistant to 300 m, powered by an automatic movement, featuring a blue dial and rotating bezel. Ocean blue, as it should be.

Finally, we will also remember the unusual “cargo” that Maxime Sorel had taken on board his boat: a waterproof box containing ten copies of the Tiefenmesser Bronze Reservoir. The objective was to bring them back to safe harbor in order to allow collectors who love sailing to afford a watch that has truly traveled the world. At the time of writing, the skipper of V And B-Mayenne was on the way to succeeding his bet, occupying the 10e position a few hundred miles from Les Sables-d’Olonne. A place similar to that obtained last September during the 24 Hours of Le Mans by a car carrying 24 Reservoir watches. Here again, sacred flair. And we are already waiting to know the next challenge for the brand …