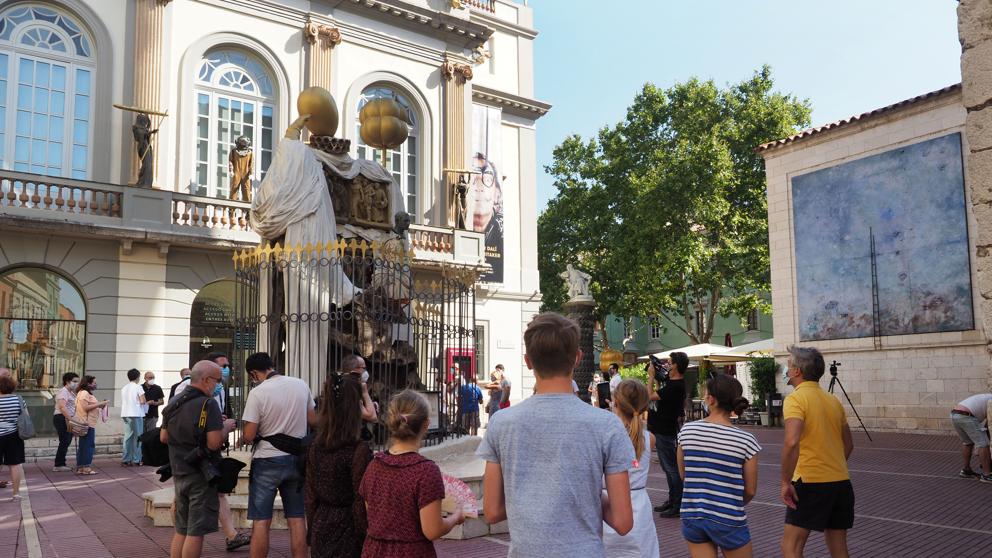 Queues at the reopening this morning of Dalí Theater-Museum of Figueres and the presence of tourists again in the streets and terraces of the city center are an important sign of optimism after a four-month pandemic. For this first day, reservations to the museum through the internet have taken over the 1,170 tickets made available to the public to guarantee all sanitary requirements. But that figure is far from the 4,000 or 5,000 that could have been sold on any given day last summer.

Jordi Mercader, President of the Board of Trustees of the Gala-Salvador Dalí FoundationYesterday was very forceful when he stated that “every effort is being made to open the museums, with the best security conditions, with more artistic attractions and with institutional support.” According to Mercader, “the Dalí Foundation had profits of more than four million euros last year, but this year the losses are calculated to be over four million, and that means an income difference of eight million between last year and East”. For this reason, he appreciated a first financial aid from the Girona Provincial Council and “the signs of goodwill from the other administrations, which we hope will lead to additional support.” Mercader reiterated that they will do what is necessary to keep the museum open but he did not want to venture anything regarding a possible closure in the autumn and winter months. “We have taken measures to encourage more public to come, the entrance has been reduced by two euros, more facilities are provided for families, and we will be very active in promotional campaigns. Right now a campaign is already underway in hotels and in the next few days a mural will be installed at Girona airport ”.

One of the novelties of this reopening is the temporary exhibition Dalí: Surrealism is me which includes twelve oil paintings from the Surrealist era, which had never been seen together. But the majority of visitors on that first day were visitors to the museum as a whole, and they ignored that display. This is the case of a couple from French Brittany, already habitual of the museum, who yesterday had wanted to show it to their two grandchildren.

The president of the Girona Provincial Council, Miquel Noguer, which has also been in Figueres to coincide with the reopening, has specified that aid of around 42,000 euros has been given for the adaptation of the equipment of the Dalí museum. For her part, the Mayor of Figueres, Agnès Lladó, He explained that already in the month of May he held a first meeting with the Board of Trustees of the Foundation to study how they could support this reopening and to join forces in claiming both the Department of Culture of the Generalitat and the Ministry of Culture to that they commit financially to the Foundation.

Mayor of Figueres: “The Dalí museum cannot be closed because it is an icon of Figueres and the country”

The mayor of Figueres is hopeful with the recovery of tourism, in view of these first days of summer. Today the Museu del Joguet de Catalunya, on the Rambla, has reopened, and a few days ago the Museu de l’Empordà did it. “We have already allocated 350,000 euros to a tourist promotion plan for the city, of which the Dalí museum is an important part,” he added. Regarding the future of the museum, she was also emphatic: “The museum cannot close in September because it is an icon of Figueres and the country and we will push with all municipal groups and associations to make it possible.” Regarding the works in Dalí’s birth house, to turn it into a center for information and dissemination of Dalí’s work, she assured that they continue at a good pace, that they were only suspended for fifteen days of the confinement and that the first phase will end She also assured that the second phase, for which she counts with an aid from Feder funds, will be carried out as planned.

In Lisbon, we paint streets in blue

Video games: the shrink behind the success of Fortnite