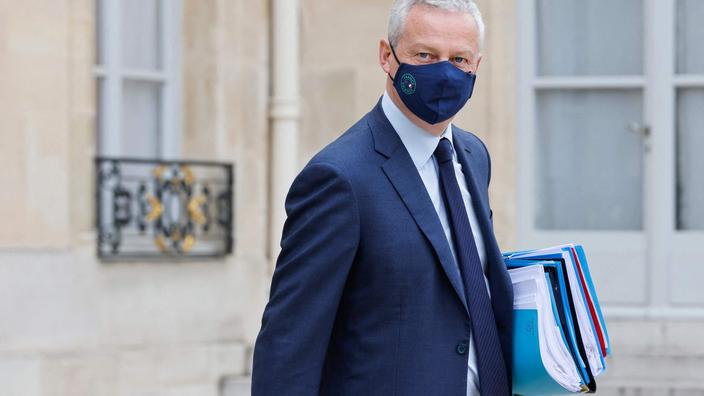 The Minister of the Economy and Finance, who maintains a growth estimate of 5% in 2021, however calls for caution in the face of the emergence of the variant.

Keep the direction. While the figures for the epidemic have been encouraging in recent weeks, the Minister of the Economy welcomed the economic recovery which, according to him, “holds up for the long term“. Thus according to figures from the Ministry of the Economy, the week of June 14 to 20 saw spending by bank cards reaching amounts 18% higher than those observed in 2019, i.e. before the health crisis, the same week. This dynamic is notably driven by sales in physical stores (+ 16%) and by online sales, which is resisting despite deconfinement (+ 24%).

The Minister of the Economy “maintains»Thus his estimate of growth for the year 2021 at 5% of GDP. A more pessimistic figure than that put forward by the Banque de France for example – which estimates growth at 5.5% – but which Bruno Le Maire justifies by the persistence of a health risk carried by the Delta variant, which now has and already forced some countries like Australia to reconfine locally. “The Delta variant is the only real risk to growth. There remains a health risk“, Insisted Bruno Le Maire.

The Delta variant, which has started to spread in France, in fact already represents 20% of contaminations, said Minister of Health Olivier Véran on Tuesday morning. “There is a very good chance that Delta will replace the British variant.“, For his part said infectious disease specialist Odile Launay. The British variant had already caused the third wave of the epidemic. As for the Delta variant, “preventing its diffusion is unthinkable, it is therefore a question of delaying it and limiting it as much as possible“, Had urged the coordinator of the Cochi-Pasteur vaccinology center.

Pension reform on the table

In a context of health crisis and with the presidential election looming in less than a year, the government is not abandoning its reform agenda. Among them, the flagship, pensions. The Minister of the Economy is clearly in favor of this socially sensitive reform, while the government weighs the scenario of a retirement age postponed to 64 years. Bruno Le Maire believes that “put off until tomorrow what we can do today. (…) We must make this reform, because it is in the interest of France when we have decided to do itHe adds.

«You have to do it, but you also have to choose the right time“, Also approved the Prime Minister Jean Castex in our columns, while affirming that”it won’t be the same»Reform than that initiated by his predecessor Edouard Philippe. The choice of timing is therefore in the hands of the President of the Republic who, according to our information, is attentive to reform plans which can yield a lot and quickly, in a context where the economic situation has been severely degraded by the health crisis.