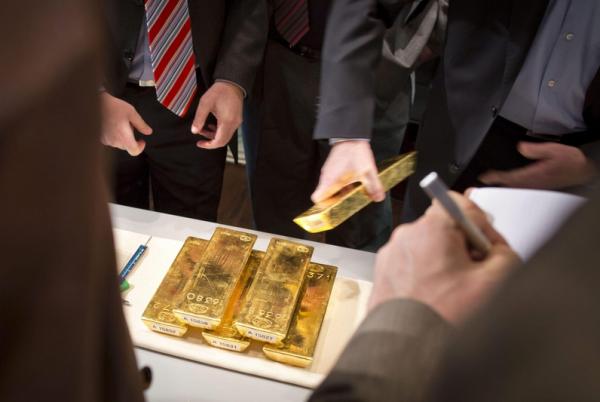 Investing.com – It seems that comments from Fed officials will not give comfort, as the markets catch a breath after fresh hints, the yellow metal does not need to fall into a new trap of uncertainty and confusion.

“Gold is starting to find support here at the $1,775 level,” John Finney, director of business development at Guardian Gold Australia, tells Bloomberg. “We are starting to see investors switching back to metals at these lower prices now, as the Fed’s more hawkish turn appears to be It has been priced.”

But gold has now broken those support levels, recording losses of more than 13 dollars in these moments.

It seems that confusion about when to move interest rates and the mixed signals sent by the US Federal Reserve will remain the dominant feature of investors’ trading in the coming period. And a member of the US Federal Reserve, Randall Quarles, said yesterday evening, Monday, that the members of the monetary policy committee in the bank are well aware that they may be wrong about the rates.

“If within a year we don’t see inflation stabilizing close to the 2% target, the bank has the tools to address that,” Quarles said. Investors are now focused on the expected US labor market data, as well as the indicative data expected to be released throughout the week’s trading.

Confusion over the Fed’s policy outlook has been brewing for nearly two weeks after an abrupt shift in its latest policy decision that spooked investors.

The dollar strengthened to approach its highest level in nearly 8 weeks, with many traders largely reluctant to bet before the timing of the Federal Reserve’s halt to stimulus programs could change.

He said a week ago that fear of inflation would not be the only factor in policy makers’ action; They encourage a broad and inclusive recovery of the labor market.

And after sharp losses last week that exceeded 5%, it seems that gold is on its way to record more losses until the upcoming data date. And gold fell, the price of spot delivery for an ounce of gold in these moments by more than 13 dollars, declining by about 0.7% down to the levels of 1766 dollars.

With this range trading, and until gold breaks above $1800 or below $1,760, it looks like a sideways trend in the short term,” said Kyle Rhoda, analyst at IG Market. On the other hand, it increased to the highest levels of 92 points, and the index that measures the performance of the US currency against a basket of major currencies rose.

The gold market witnessed tepid trading as some market players are still confused about the Fed’s policy outlook; A number of US central bank policy makers have shifted towards a monetary tightening tone despite a weaker-than-expected US inflation reading last week.

The dollar is hovering below a two-month high against its rivals, raising the cost of gold to holders of other currencies. But Mir said that “the dollar will start to fall again, because the scene is clear on the front of raising interest rates for at least 18 months to two years.”

“While gold rebounded in the selloff two weeks ago, gold continued to trade below the 100-day moving average,” the OCBC said in a note, adding: “We expect gold to resume its downtrend this week as companies and markets continue Risk sentiment looking towards prospects of monetary tightening from the Fed.”

However, optimism remains in some market segments, the OCBC said. Today, investors are awaiting the data of the consumer confidence index; It is expected to rise from 117.2 to 119.0, and a higher reading indicates an increase in consumer optimism.

Allianz (DE:) Chief Economist, Mohamed El-Erian, believes that high levels of inflation in the US are not temporary and that the Fed is wrong in its estimates. In an interview with CNBC, El-Erian said: “Fed officials underestimate inflation, which risks exposing the economy to another recession.”

“Every day I see evidence that inflation is not temporary and I am concerned that the Fed is lagging behind,” said El-Erian. If this materializes, the Fed may have to raise rates and tighten monetary policy sooner than he would like, said El-Erian.