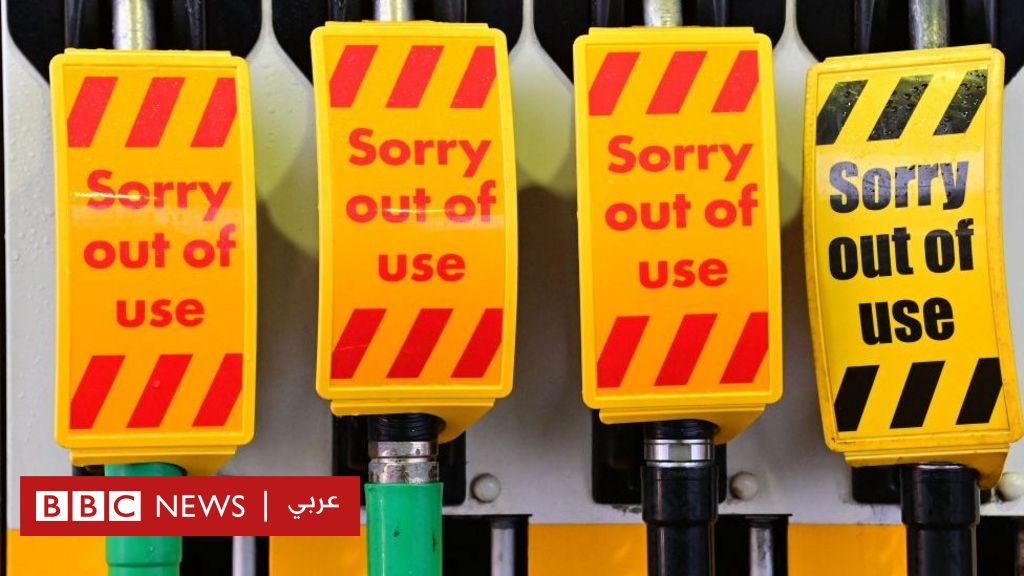 You may have heard of long queues at gas stations in Britain in recent days, and many people panicked at what they see, even though the government and oil companies say there is no shortage.

What happens at gas stations?

Queues stretched for miles outside some gas stations, with people waiting for hours to fill their tanks.

Some drivers sleep in their cars while waiting, while others try to get past the queue.

Many gas stations were unable to keep up with demand and had to close.

There were ugly scenes in some places.

Professor Danny Altman of Imperial College London tweeted, describing a “battle” he saw erupting as he ran out of petrol.

He said, “The man behind me was angry, and started punching the guard. It became a fight between 8 to 10 men punching and kicking each other.”

Is Britain out of fuel?

Oil companies, including Shell, ExxonMobil and Green Energy, confirmed that there was no shortage of gasoline, and said the pressures on supplies were caused by “a temporary rise in customer demand – not from a nationwide shortage of fuel”.

“There is no shortage. The most important thing is for people to buy gasoline as they usually do,” Environment Minister George Eustice said Monday.

“It would have been completely cured if we hadn’t seen that media coverage on the issue of there being a shortage, and then the public reaction to it,” he added.

But it is clear that there is now a shortage of gasoline in the outlets.

The Fuel Retailers Association said Monday that about two-thirds of the outlets out of about 5,500 independent outlets have run out of fuel, and that the rest “will run out of fuel and soon run out”.

Urban areas in Britain were the hardest hit, while Northern Ireland is currently unaffected.

What is the reason for the rush to buy fuel?

The main reason, in fact, is another shortage that Britain is currently experiencing, and that is truck drivers.

It is estimated that the shortage is currently more than 100,000 drivers in Britain, and has led to problems for a range of industries: such as convenience stores and fast food chains, in recent months.

The fuel panic erupted after oil company BP said last week it would have to close a few gas stations “temporarily” due to a shortage of truck drivers. Few other oil companies faced similar problems at that point.

So why does the UK have a shortage of truck drivers?

While there was evidence of a shortage of drivers for heavy goods vehicles across Europe, Britain was among those most affected by the problem.

After Brexit, many European drivers returned to their countries of origin, or decided to work elsewhere, due to the bureaucracy at the border and its impact on their income.

And after the Covid-19 epidemic, more drivers returned to their cities, and only a few did.

Meanwhile, older drivers have retired, and others have not taken their place due to the large backlog of heavy truck drivers’ testing due to the pandemic.

What is the British government doing about the crisis?

On Monday, the government announced that the army was put on standby to help relieve pressure on gas stations.

Military tanker drivers will receive the necessary training so that they are ready to deploy, if necessary, to deliver fuel to where it is most needed.

Ministers said that licenses for heavy vehicles would be extended, and the law on competition between oil companies would be suspended temporarily.

This makes it easier for companies to share information about fuel supplies, Business Minister Kwasi Kwarteng said, prioritizing the neediest areas of the country.

In an effort to address the driver shortage, the government announced that it would provide temporary visas to 5,000 drivers of foreign fuel tankers and food trucks, as well as 5,500 poultry workers, in the run-up to Christmas.

It has also sent about one million letters to drivers with heavy truck licenses to encourage them to return to the industry, and plans to train another 4,000 to become heavy truck drivers.