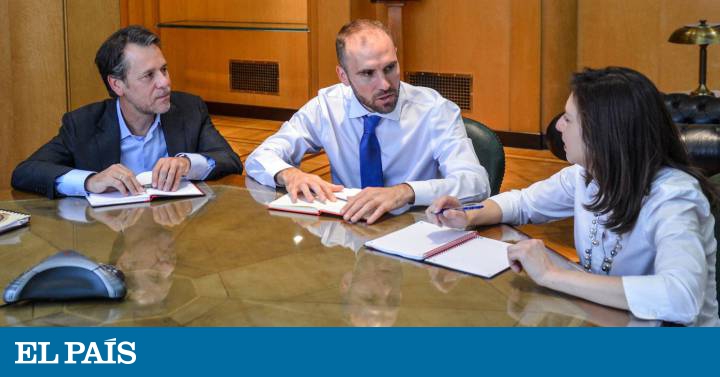 Argentina has obtained strong support from the International Monetary Fund in its negotiating strategy with external creditors. At the close of a week-long visit in Buenos Aires, the agency’s technical mission issued a statement asking private holders of Argentine bonds to accept an “appreciable withdrawal” of the debt, which it considered “not sustainable “and therefore unpayable, as argued by the Government of Alberto Fernández. Creditors can now expect a tougher negotiation.

The statement, unexpectedly, meets the expectations of President Fernández, who even before taking office on December 10 warned that to overcome the crisis a schedule of maturities would not be enough that also did not contemplate a withdrawal of capital and interest. The IMF has requested for Argentina “a definitive debt operation”, this is a complete restructuring that allows, once and for all, to balance the Argentine accounts and make any payment plan that it agrees sustainable.

“I welcome the IMF acknowledging the Argentine position regarding the borrowing processes”, Fernandez wrote in his official Twitter account. “If all parties show willingness to agree, we can grow again, honor our commitments and have a standing Argentina again,” he added.

Fernández must renegotiate with the bondholders about 100,000 million dollars. The IMF did not mention the loan for 57,000 million dollars that it has in force with Argentina, of which it has already delivered 44,000 million. The payments were suspended at the end of last year, when it became clear that the Government of Mauricio Macri could not comply with the return schedule agreed in mid-2018. Vice President Cristina Fernández de Kirchner claimed weeks ago to the IMF that contemplates a withdrawal of Capital of the financial bailout he gave to Macri for considering that the money was used to finance capital flight. The IMF then recalled that such a measure is prohibited in its statutes.

Wednesday’s statement, however, has given Fernández an unexpected oxygen balloon, because the success of any debt negotiation with private bondholders becomes easier if he has the support of the Fund. In the text, signed by the team led by Julie Kosack, deputy director for the Western Hemisphere, and Luis Cubeddu, head of mission for Argentina, the Fund diverts the results of its report last year, when it considered that Argentina’s public debt was “sustainable , but not with a high probability. ” The risks that the agency saw then now “have materialized.”

“Specifically, our vision is that the primary surplus that would be needed to reduce public debt, gross financing needs (…) and satisfactory product growth are not economically or politically feasible,” said the Fund. As the only way out, technicians see an “appreciable contribution from private creditors.” “The IMF emphasized the importance of continuing a collaborative process with private creditors to maximize their participation in the eventual debt operation,” the text continues.

The negotiation process will have a new chapter during the next weekend in Saudi Arabia, where the Minister of Economy, Martín Guzmán, and the managing director of the agency, Kristalina Georgieva, will meet in the framework of the meeting of finance ministers of the G20 Guzmán established a calendar that marks the second week of March as a limit for an Argentine offer to creditors.

Argentine bonds are listed in the range of 45 cents per dollar issued and have fallen On average 3.5% so far this year, due to uncertainty about the Government’s ability to pay. While the country risk prepared by JP Morgan, which establishes the interest rate differential that emerging companies must pay on US securities, is above 2,000 points.

Abuse in the Catholic Church: US diocese files for bankruptcy