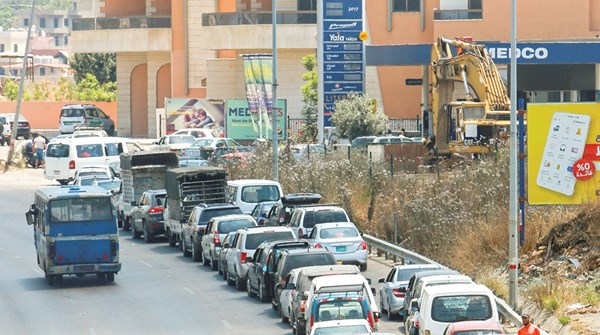 Yesterday, Lebanon raised fuel prices by more than thirty percent, in a move that comes within the framework of partially lifting fuel subsidies, with the depletion of the dollar reserves at the Banque du Liban, while the country plunged into a cycle of prolonged economic collapse.
The Lebanese have been waiting for weeks for hours in long queues in front of gas stations, which adopted a policy of severe rationing in the distribution of gasoline and diesel, while the ability of the Electricité du Liban to provide electricity has gradually decreased, bringing the hours of rationing in a number of regions to 22 hours per day.
According to the new price list published by the official National Media Agency in Lebanon, the price of a can of gasoline (20 liters) 95 octane exceeded 60,000 pounds (40.6 dollars according to the official exchange rate) after an increase of about 16,000 pounds.
Hundreds of Lebanese flocked to gas stations, which were surrounded by long queues.
In light of the economic collapse, which the World Bank ranked this month among the three most severe economic crises in the world since the middle of the last century, the Banque du Liban was supporting the import of fuel through a mechanism whereby it provides 85 percent of the total value of the import cost, according to the official exchange rate fixed on the 1507 pounds, while importers pay the remaining amount according to the black market exchange rate, which exceeded 17 thousand during the past days.
In light of the scarcity of the Central Bank’s reserves, the authorities began months ago to search for rationalizing or lifting subsidies on the import of basic commodities such as flour, fuel and medicines, to begin gradually without an official announcement to lift subsidies on several commodities. The price hike came yesterday, after the caretaker government granted last week an exceptional approval to finance the import of fuels at a price of 3900 pounds to the dollar instead of 1500, and then the Central Bank opened credit lines for importing fuel according to the new price. Yesterday, six ships began unloading their fuel loads, according to what the National News Agency quoted the representative of fuel distributors, Fadi Abu Shakra, as saying.
Over the past weeks, overcrowding in front of gas stations has developed into problems and even shootings among citizens, who are tired of waiting for long hours.
The rise in fuel prices would be reflected in a rise in the prices of basic goods and services, including the bill for private electricity generators, which compensate for the lack of state supplies, transportation, and even bread. This would deepen the suffering of the Lebanese, more than half of whom are now living below the poverty line, and groaning under the weight of an exceptional decline in their purchasing power, while the Lebanese pound has so far lost more than 95 percent of its value against the dollar.
International pressures, led by Paris, did not produce any result in terms of forming a new government to replace Hassan Diab’s government, which resigned days after the Beirut port explosion last summer.
Dozens of demonstrators closed main roads in several regions of the country in protest against the worsening fuel crisis and the continuous power cuts. Yesterday, several roads were cut off, and the security forces reopened them.
No radical solutions are on the horizon to save the country, and officials are drowning in sharp political differences that have prevented the formation of a government capable of carrying out reforms that the international community puts in place as a condition for Lebanon to obtain financial support.
The ongoing political impasse raises fears that the country is on the verge of collapse, amid the intransigence of the ruling political elite and its insistence not to form a government of technocrats that will lead the country out of the current crisis. Hundreds of demonstrators in poor neighborhoods burned tires, in anger at the worsening economic crisis, chanting slogans against the government and demanding the removal of the Hezbollah militia, which is behind the continued sanctions that paralyze the country’s economy and push people to starvation.
Experts rule out making any reforms soon, and without them, the country will continue to slide into failure.
“The country was a powder box waiting to explode,” says one Lebanese journalist, adding that he had been expecting “riots” for several weeks.
The protests began in October 2019 after the government proposed raising taxes on the WhatsApp messaging service, the most common form of communication in Lebanon. It soon developed into broader demands for political change and an end to the sectarian quota system. But the initial demands were sidelined, as the movement was contained and the demonstrations faded.
For her part, a lecturer at a university in the Lebanese capital said that she had lost hope in Lebanon after she initially joined the “revolution” with enthusiasm, believing that it would lead to change.
With little hope that the Lebanese political elite will act to stem the economic bleeding, the optimism of the Lebanese is waning, especially with rampant corruption and Hezbollah’s influence on the political situation.

The Defense Council calls on the security services to confront the chaos
The Supreme Defense Council in Lebanon called on the military and security services, yesterday, to maintain the necessary readiness to not allow “some security violators” to destabilize the security situation, due to the financial, economic and living conditions, especially with regard to closing public roads, or encroaching on public and private property.
In decisions issued after the end of its meeting yesterday, according to what the Lebanese presidency published on Twitter, the Council called on the Minister of Finance to coordinate with the Ministers of Defense and Interior to find ways to support the military and security forces, in light of the deteriorating financial and economic conditions.
Lebanese President Michel Aoun had previously affirmed that “expression of opinion is secured for all, but it should not turn into chaos and riots,” calling on the security authorities not to be lenient, in order to preserve the safety of citizens and public stability.
At the beginning of the meeting of the Supreme Defense Council, Aoun said: “The main purpose of the meeting is to discuss the security situation.”
He pointed out that “what happened in the past few days in front of the gas stations is unacceptable, and the humiliation of citizens is unacceptable under any consideration, and all concerned should work to prevent the recurrence of these practices.”