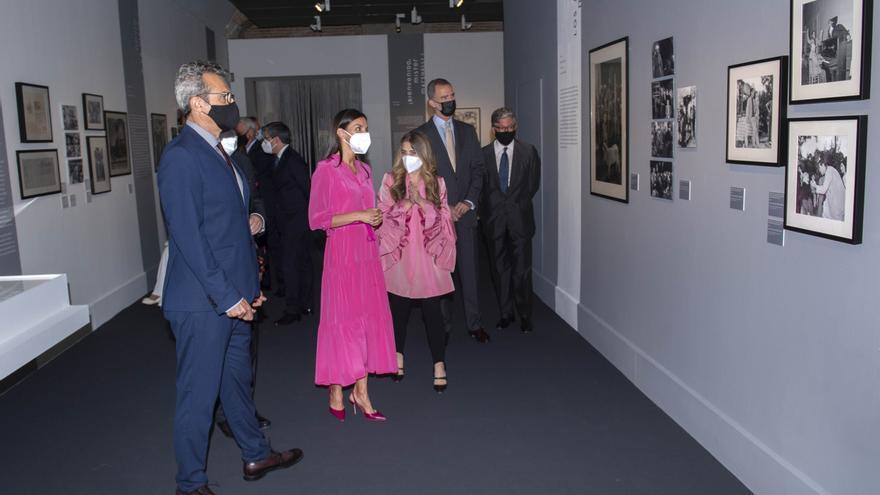 The Kings Felipe VI and Letizia Ortiz during their visit to the exhibition ‘Berlanguiano, Luis García Berlanga (1921-2021)’
EP

The Kings have joined this Wednesday the tribute to the Valencian filmmaker Luis García Berlanga on the occasion of the centenary of his birth by opening an exhibition that traces the artistic and personal career of what was one of the most prominent creators of the 20th century.

The Royal Academy of Fine Arts of San Fernando in Madrid is the headquarters of the exhibition, entitled ‘Berlanguiano. Luis García Berlanga (1921-2021) ‘and organized by the Film Academy, which will remain open to the public until September 5.

To the inauguration The film director’s widow, María Jesús Manrique, and her children José Luis and Fernando attended., who have joined the tour after the Kings greeted them and chatted with them upon their arrival at the academy. Among the authorities present were the Minister of Culture and Sports, José Manuel Rodríguez Uribes, and the president of the Film Academy, Mariano Barroso.

Hand in hand with the curator of the exhibition, Esperanza García Claver, Don Felipe and Doña Letizia have toured the rooms where more than 170 photos on the personal and artistic trajectory of García Berlanga from graphic archives such as the Spanish Film Library, the Salamanca Historical Memory Documentary Center, the EFE Agency or the US Academy of Motion Picture Arts and Sciences. There’s also scripts, posters, shooting plans as well as original sketches of some of the most famous films by the Valencian filmmaker, such as ‘Welcome, Mister Marshall!’ (1953), ‘The national shotgun’ (1978) or ‘The executioner’ (1963).

The sample includes a multiscreen where a video is projected as a tribute to a hundred actors who in their day were “berlanguianos interpreters”. With some of these actors, such as Marisa Paredes, Santiago Segura or Mónica Randal, and other people who worked with him, such as the film director and director Josefina Molina, they have spoken with the kings at the end of the tour to find out their impressions of what represented García Berlanga.

In addition to the Film Academy, the Community of Madrid, Visit València and the Spanish Film Library have collaborated in the exhibition.