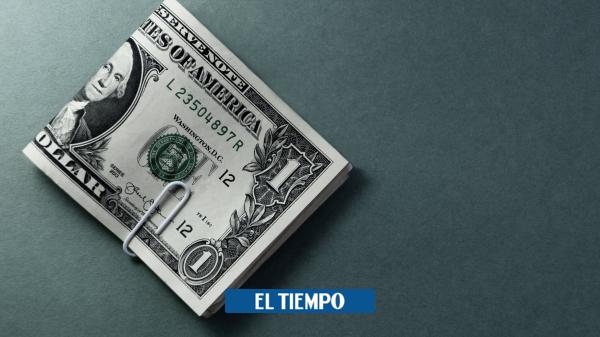 In the last month, the Colombian peso has devalued almost 13 percent and the value of the dollar has broken its historical maximum for three consecutive days, reaching 4,348.68 pesos this Wednesday. In fact, yesterday the currency was only 3 pesos away from breaking the $4,400 barrier.

According to analysts, the accelerated depreciation of the Colombian currency, which is part of the complex situation of the world economy, also has a strong relationship with the result of the second presidential round in the country and several of the announcements made by the new president, Gustav Petro.

In fact, former Finance Minister Rudolf Hommes, who supported the Historic Pact campaign, called on the new government to send the appropriate signals that serve to calm the economy.

“Between June 6 and today the Colombian peso has devalued 12.96%,” Hommes said. “In the same period, the Chilean peso was devalued 3.4% and the euro 3.3%”, he assured: “It is not correct to think then that the accelerated devaluation of the peso is “a world phenomenon” when it is devalued 3 times more than the others.”

And he asked Petro to quickly show his cards against the announced tax and pension reforms.

But the Colombian peso has not been the only one in the region that has lost value against the dollar. This same phenomenon has been registered in countries such as Chile, Argentina, Mexico and Peru.

(See also: The dollar continues to rise and has already exceeded 4,300 pesos)

Latin American currencies extended the depreciation trend on Wednesday, given the persistent appetite for dollar assets to hedge risks amid the winds of recession.

(Read here: Dollar became more expensive today another $94.5 and is heading towards $4,400)

Fears of a recession impacted oil prices -an important generator of foreign exchange for many countries in the region-, which ended with falls of around 2% to 12-week lows, because investors are more concerned that the energy demand is affected by the global economic slowdown.

What is happening in Chile?
​
The Chilean peso closed with a decline of 1.68%. The dollar reached 1,000 Chilean pesos around midday on Wednesday and closed the day at 965 pesos, a new all-time high amid a global strengthening of the currency and given the decline in the value of copper, the country’s main export.

“We have to be calm, since the factors that in the past made Chile especially vulnerable to the exchange rate are no longer there today,” Finance Minister Mario Marcel said.

It is up to the government, he added, “to worry about cushioning the effects that this may have, especially in the lower-income sectors, an impact that is not direct, since Chile is not a dollarized economy.”

The rise in the dollar occurs in a context of a global rebound in the US currency and the poor performance of raw materials, which in Chile was noted by the decline in copper, of which it is the world’s leading producer.

And in Argentina?
​
In Argentina, the peso depreciated 0.15% despite the intervention of the Central Bank, which had to sell some 90 million dollars and lose some 560 million in the course of July, according to operators.

In addition, Argentina’s sovereign bonds renewed record low levels on Wednesday and country risk rose to a record due to the manifest distrust of investors after the abrupt change of the economy minister, which increased economic doubts in the midst of a complex conjunctural horizon.

Silvina Batakis took office on Monday after the untimely resignation of Martín Guzmán as head of the Treasury, who left the portfolio over the weekend citing strong opposition to his administration.

“After the resignation of Guzmán and his team, the base scenario is worse,” clearing and settlement agent Neix said. “The minister has little time to show results… The baseline scenario is one of greater uncertainty with a direct impact on inflation and exchange rates,” he added.

In Brazil, the real lost 0.63% in its fifth day of falls and marked a minimum since the end of January, in the face of international fears and growing domestic fiscal uncertainty; while the Bovespa stock index added 0.55%.

In Mexico, the peso lost 0.86%, hitting its worst level in three weeks; while the benchmark S&P/BMV IPC stock market index recovered half a percentage point.

INTERNATIONAL WRITING
*WITH REUTERS and EFE

in Mississippi, the last clinic performing abortions has closed

The resumption of trading of the two “demon stocks” has both dropped to the limit, and the major shareholders have reduced their holdings by hot money crazy speculation-Hangzhou News Center-Hangzhou Net