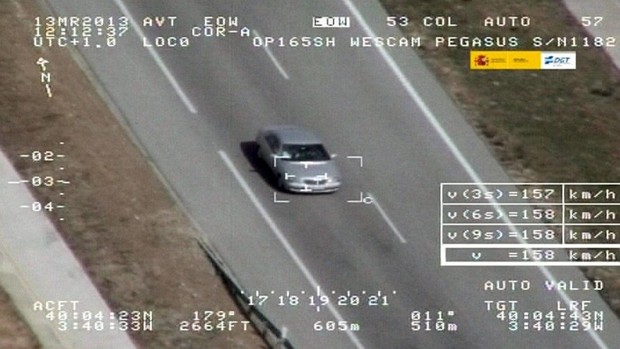 The Boat of Avila

Speed ​​remains one of the most common infractions on our roads. This is demonstrated by these videos captured by DGT helicopters, in which you can see how some of the vehicles exceeds 210 km / h.

These images were recorded during the last operation of speed watch on the roads, launched on the occasion of the beginning of the holiday period.

During the seven-day speed control and surveillance campaign carried out by the
General direction of traffic between July 12 and 18, the agents of the Traffic Group of the Civil Guard They have established 1,923 speed control points and have controlled 555,221 vehicles.

Of the total number of controlled vehicles, 29,301 drivers were driving at a speed higher than the permitted speed, a similar percentage to the campaign carried out in May of this year.

5.7% of controlled vehicles On conventional roads, 4.7% of those controlled on high-capacity roads (highway and motorway) have been denounced for speeding.

Eight of the reported drivers committed a crime against road safety and were brought to justice for exceeding the speed allowed on the road by more than 80 km, as stated in the Penal Code.

Traffic regulations state that the maximum generic speed for cars and motorcycles on motorways and highways is 120 km / h; on secondary roads, 90 km / h and on urban roads of 30km / h on single lane roads and 50 km / h on roads with two or more lanes in each direction.

Therefore, and taking into account these speeds, drivers who violate them will be committing a serious or very serious offense, punishable by a fine of 100 to 600 euros and the loss of between 2 and 6 points, depending on the excessive speed committed, as can be seen in the table of sanctions included in the Traffic and Road Safety Law.

In the event that the excess speed is greater than 60 km / h on urban roads or 80 km / h on interurban roads than that permitted by regulation, eThe Penal Code classifies it as a crime and is punished with a prison sentence of three to six months or a fine of six to twelve months or work for the benefit of the community from thirty-one to ninety days, and, in any case, to deprivation of the right to drive motor vehicles and mopeds for a period of more than one and up to four years.

In addition, on these roads, when the controls have been carried out with the radar embedded in the vehicle and while driving, the average speed at which the denounced drivers were circulating was 121 km / h, which is 31 km above the generic limit allowed on conventional roads.

To these results must be added the controls that the different regional and local police have carried out in their area of ​​competence, very important collaboration in such a way that the message of respecting the established speed limits is unified, regardless of the road on which it is circulated.