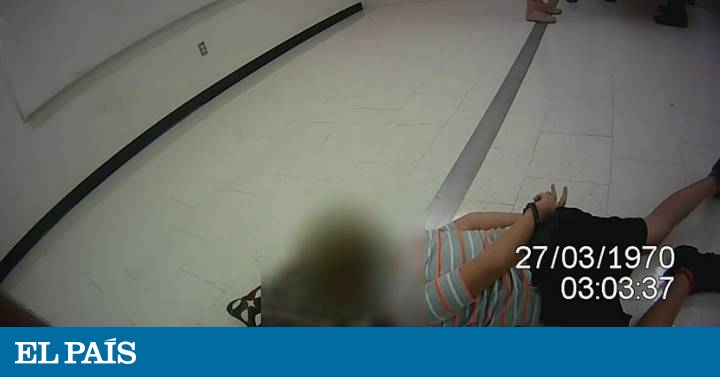 “Have you been charged with a crime before?” A school police officer asked a seven-year-old boy he had just handcuffed at his school. “Well now you’re on your way to being.” Police officer Michael Fattaleh had reported to the special education school where the little boy was studying, who had started to spit. The incident lasted almost 40 minutes and much of it was spent with the minor’s arms handcuffed behind his back and his head against a pillow thrown on the floor.

The event occurred on September 11, 2018 at a school in Statesville, North Carolina (United States). A recording obtained by judicial means on the past day 9 by WSOC-TV It is a proof provided by the mother of the minor, AG, to file a lawsuit last Friday against the agent, the municipality and the school council on which the center depends Pressly Alternative School.

“If you, friend, are not familiar with the juvenile justice system, you will be very soon,” the agent incriminated the child. At another point, he asked, “Have you ever heard the word babysitter? [“niñero”, pero que literalmente significa “sentador de bebés”] Well, I’m going to take that word literally, friend. “In the images broadcast by the television network, it can be seen that the agent grabs the child to prevent him from getting up.

At 25 minutes, the little boy started crying and screaming, saying he was in pain. Two of the people from the center were attending the scene without apparently doing anything about it. At other times, the police officer asks the minor if he is hot and pats him on the back, pick up the newspaper The Charlotte Observer.

When the student’s mother arrived, it was she who lifted her son from the ground. “I was angry, furious and destroyed,” said the woman in an interview with the television network, in which she assures that she chose the center precisely because she thought that the staff would know how to attend to her son’s needs.

“He suffered from separation anxiety quite strong,” said the woman, for whom her son is “intelligent and communicative, but also scary.” He considers that he suffered an episode of torture and that the center’s staff did nothing. “The staff and the agent, while I was torturing my son, talked about the coming hurricane, its effects, and about soccer.”

After the event, the agent insisted that he was going to accuse the child of assaulting him and told the mother that the child had confronted him, hitting and kicking him, the newspaper notes. The Charlotte Observer. These episodes are not seen in the video clips broadcast.

The lawsuit has been filed for violation of constitutional rights, gross negligence, and causing extreme pain and suffering and emotional anguish to the minor. “The role of the school police is to make sure the students and teachers are safe.” That an agent inflicted harm on a child for a minor matter is something “inexplicable”, the mother’s lawyer, Alex Heroy, told the television network.

According to WSOC-TV, the North Carolina State Investigation Agency launched an independent investigation to clarify the facts. The district attorney concluded that she had not found sufficient evidence in the video recorded at the school to prove beyond a reasonable doubt that Fattaleh had committed a crime.

The agent no longer works at the school, nor as a policeman. He resigned from the position shortly after the incident, collects The Washintong Post. The boy has not returned to school since then and his mother quit her job to educate him at home.

The case joins a series of police incidents involving autism or mental illness in the US Last month, a 13-year-old teenager suffering from a nervous breakdown derived from the Asperger syndrome he suffers from was shot by police who had been appealed to his mother to restrain him. Also in September, a mother from Washington State reported that her son’s school had put her son’s desk in the bathroom. Last March, a man with mental problems died as a result of suffocation inflicted during an arrest.

See Also:  In the Vercors and the Bauges, the resorts are already thinking of "après ski"