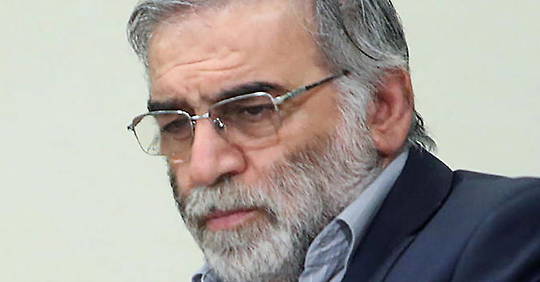 It is with undisguised pleasure that Benjamin Netanyahu enumerated on Friday the list of goals he achieved during the week. “This is a non-exhaustive list, because I cannot tell you everything”, concluded, not without malice, the Israeli Prime Minister, in a video broadcast by its services. Moments earlier, Mohsen Fakhrizadeh, the father of Iran’s nuclear program, was assassinated in a formidable commando operation carried out in the village of Absard, east of Tehran.

Read also Who murdered the father of Iranian nuclear power?

Taking advantage of this public holiday in Iran, the 59-year-old Iranian scientist, also an officer of the Revolutionary Guards, was in his vehicle this Friday at the beginning of the afternoon, in the direction of the home of his in-laws, when his road crossed that of a Nissan van which exploded in its path. A team of armed men then emerged from a Hyundai Santa Fe 4×4 and fired at the vehicle, neutralizing four of his bodyguards and seriously injuring Fakhrizadeh. Transported to a hospital in Tehran by helicopter, the head of the research and innovation department of the Iranian defense ministry succumbed to his injuries. As for the mysterious team of attackers, it has disappeared as if by magic.

“This is an extremely complicated operation which required a great deal of preparation and which was carried out with great professionalism”, analyzes Raz Zimmt, researcher specializing in Iran at the Institute for National Security Studies (INSS) in Tel Aviv. “However, only two countries have the capacity and the interest to achieve such a thing: Israel or the United States, or both. ” Asked by the New York Times, an American official attributed the responsibility for the assassination of Mohsen Fakhrizadeh to the Hebrew state alone.

As usual during secret operations against enemy countries, Tel Aviv did not wish to react officially, like the wave of assassinations of several Iranian scientists between 2009 and 2011, blamed on the Hebrew state . However, according to the Israeli channel Channel 12, all Israeli embassies around the world have been placed on alert. In Tehran, the responsibility of the Mossad, the Israeli intelligence services, is in any case no doubt. “This is a very sophisticated attack on the part of Israel involving no less than twelve attackers,” says an Iranian expert who wishes to remain anonymous. “The information was given by the Mossad who charged Iranians, members of the People’s Mujahedin Organization [d’opposition à la République islamique, NDLR], to carry out the mission in the field. “

Mohsen Fakhrizadeh had been in Israel’s sights for several years. “Fakhrizadeh, remember this name”, had thus declared Benjamin Netanyahu, on the occasion of the revelation in May 2018 by Israel of thousands of documents stolen by the Mossad in Iran. The physicist had notably worked from 1999 to 2003 on a secret military project, called Amad, ultimately aiming to produce five nuclear warheads, in violation of Iran’s international commitments. But under pressure from the United States, which had just invaded Iraq, the Islamic Republic had decided to end it. “Fakhrizadeh had however continued its activities aimed at preserving nuclear know-how”, underlines researcher Raz Zimmt. “He remained a central figure even though the project had been dismantled. “

Read also Netanyahu on a secret mission in Saudi Arabia

If the Iranian nuclear crisis has experienced a temporary respite, with the signing in July 2015 of the Iranian nuclear agreement (JCPOA), respected by Tehran according to the Atomic Energy Agency (IAEA), the unilateral withdrawal of the United States of the JCPOA three years later, encouraged by Israel and the Gulf monarchies, added to the resumption of American sanctions against Iran, got the better of the diplomacy route. The Islamic Republic has since resumed its prohibited activities, accumulating to date a stockpile of 2,442.9 kg of enriched uranium, twelve times the authorized limit. If the Iranian regime is still far from obtaining atomic weapons, it is decreasing day by day the breakout time, the time needed to acquire it if he so decides.

“This situation worries Israel, which is engaged in efforts to delay the Iranian nuclear program, as we saw this summer in the Natanz plant,” explains Raz Zimmt. July 2, a huge explosion struck a center housing modern centrifuges in this uranium enrichment complex located in central Iran. “This has considerably hampered the modernization of Iran’s nuclear program,” explains at Point a former senior Israeli intelligence official. “On the other hand, the elimination of Mohsen Fakhrizadeh will not put a stop to Iran’s activities, because they do not depend on one person, but on a hundred scientists. However, it risks creating fear in their hearts. “

The current escalation around Iran is no surprise. Faced with the failure of its policy of maximum pressure against Tehran, the Trump administration intends to use its last weeks in Washington to take revenge on the Islamic Republic. Concerned about Joe Biden’s announced will to reinstate the Iranian nuclear agreement, the outgoing American president would like to complicate such a scenario by precipitating a crisis with the Islamic Republic. US Secretary of State Mike Pompeo made a diplomatic tour of the Middle East to his closest allies – Israel, Saudi Arabia and the United Arab Emirates – last week to coordinate on ways to repel the Iranian threat .

“The most important thing in this case is the timing of the operation,” said the former Israeli intelligence official. “There are only about 50 days left under the Trump administration. The mission has been executed now, as Iran is unlikely to react right away, risking giving Trump the opportunity to retaliate against Tehran in turn. The Iranians have understood this well. Aware of the obligation not to compromise his ties with the future Biden administration, the Iranian president announced that he would not fall into the “trap” set according to him by Israel, promising a “timely” response. “The Iranians are cunning and do not want to play Donald Trump’s game,” continues the former Mossad official. “But it is certain that Iran will respond sooner or later. “