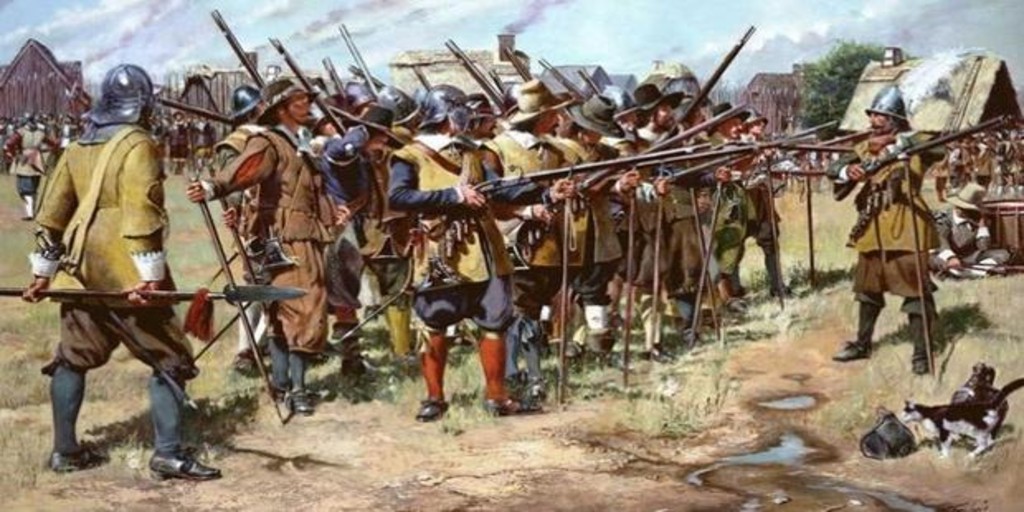 A Juan Victor Carboneras, author of ‘Spain my nature. Life, honor and glory in the Tercios‘and president of the’Association January 31 Tercios‘, there is a snapshot that makes his hair stand on end: that of a group of sixteenth-century Spanish soldiers walking through the streets shouting “Men are recruited!” “This was how the captains, accompanied by their subordinates, a drummer and a fife, got combatants to form a company,” he told ABC. Then a path of training and hardship began for the newcomer. As a lover of the Spanish Tercios, Carboneras knows that these types of images were lived in all parts of Spain, although especially in small towns.

«It was there, in the tabernas And in the plazas, where they carried out the recruit ”, sentence.

Based on this, both his group and many other organizations –’Albaladejo Siglo de Oro ‘, the Diputación de Ciudad Real, the Albaladejo City Council,’ Asociación Cultural Miliarium-Albaladejo ‘and’ Campo de Montiel’– have orchestrated the first Historical and Recreation Days in the town of Albaladejo. The event, which will be held next October 2nd In the aforementioned town, it will include all kinds of activities related to the history of these soldiers and will ultimately make an entire population go back more than five centuries in time. “We invite anyone who wants to enjoy a day dedicated to the Tercios to come,” he says. Because, as he himself remembers, in these types of places the Tercios also played a prominent role.

What is the plan of the conference?

We want to maintain the spirit of the association ‘31 January Thirds‘: combine many things where everyone participates. The people of the town collaborate, almost a hundred re-enactors from inside and outside of Spain and local merchants. We will have heavyweights of history like Magdalena de Pazzis, the masters of the Ancient Fencing Association…

At half past nine in the morning the camp will open, which will be in the castle square. When the visitors arrive they will see many shops of the soldiery, but also many others of the merchants accompanying the Tercios. There will be a chef in charge of preparing period dishes, a craftsman who will sew bags, another who will work leather … They will be in charge of teaching those present how it was done then.

You are also going to recreate a soldier recruit …

Indeed, at ten o’clock. To all who ‘join’ the Tercio we will deliver a recruitment letter based on official documents that we have taken from the National Library and the Simancas Archive. There will also be a training of the Lepanto veteran troops, of great importance these days. We will show the pikes, we will show the arquebuses to those present … At noon, two experts will carry out an exhibition of clothing and, from there, we will give way to a period meal, to a theater related to Philip II, to a round table on the Tercios and –among many other things– to a night watch.

Yes. We will turn off the lights of the town, we will put torches and candles and the ‘Tercios’ will walk through the town. Of course, we have several ‘surprises’ in store for everyday life. For example, in the middle of the night the soldiers will have to arrest a thug. Picturesque situations that will allow those present to understand what the day was like.

Is the town related to the Battle of Lepanto?

We have looked for a place that was related to the Battle of Lepanto. In this case, the patron saint of the town is the Virgen del Rosario. In addition, we have found a document confirming that in Albaladejo the bells rang in honor of the victory.

How important was Lepanto historically?

The Battle of Lepanto was seen from two perspectives. On the one hand, it was the conflict that managed to stop the advance of the Turks, who had been harassing the Christians in Europe. On the other, it had an ideological significance. Beating Muslims helped generate that feeling of Christian union that I was looking for Carlos v before Philip II. They were two realities that coexisted.

And for the Tercios?

It proved that embarked infantryBy fighting the way they did on land, they could defeat the Turks, who were some of the best soldiers of the time. It was a real revolution to use the tactics of ground soldiers on galleys. Something that had not been seen until then.

How was victory taken in the villages?

Until then there was always a terror of the Turk, because they were the reflection of barbarism. For ordinary people, therefore, it meant losing their fear of this enemy and gaining confidence in the Christian army.

You are going to represent a training session for the Tercios, what was it like?

They didn’t actually have one as such. What they did, when it was quiet, was learn how to move. That was the key. Imagine a large group of soldiers with pikes and arquebuses. The moment someone made a mistake, the entire formation collapsed. They also wanted them to know how to use the partner’s weapon. It is logical, in case they lost theirs in the campaign and had to make use of another. It is something that you see a lot in Italian texts, where they went through. What used to happen is that the captains brought their company out to train, but not with the concept we have today. Rather with the idea of ​​practicing those movements.

Was the veteran teaching the rookie?

The veteran soldier was a faithful reflection of how the newcomers should behave, of that there is no doubt. They related to each other and transmitted their experience. The key was that there were no groups, they all mixed. Still, the captain was seen as a father by newbies.

And in the case of the galleys?

There was no prior training. In fact, many of the embarked soldiers saw the sea for the first time when they got on a guys. In the end, since they applied the same precepts on land as in water, they did not need it.

It’s a scene that makes my hair stand on end. The process was simple: the king needed troops and delivered the patent – the permission to recruit combatants in a certain place – to a series of captains close to the court. They went to the areas they knew best to form their company. When the time came, a sergeant and even ensign. These, previous contacts with the administration, began to recruit to the sound of a fife and a drum. They did it after putting up a flag.

Any curiosity that is usually overlooked in recruitment?

It is not usually explained that, in addition to the area in which they put the flag, they went through the taverns to recruit soldiers. In addition, several veteran soldiers were brought in to show off how well they lived in Italy or the sheer number of women they could have if they joined the Tercio. As the Army defended the monarchical and Christian values, key at the time, there was no shortage of recruits.

What workers were mobilizing with the Tercios?

We must imagine the Thirds as a walking city. It is something that looks very good when talking about the Spanish Way. When the soldiers moved there were many people around them. To begin with, they used to travel with their wife and children. But they were not the only ones: there were shoemakers, women who they washed the clothes, chefs, sappers that facilitated the passage of troops … They were a society unto itself. That is why the representation of the trades that we are going to have is important.

But for having, there were even chaplains. They were one of the fundamental pieces within the Tercios. It was just as important for the soldiers to heal their wounds as it was to be at peace with God and receive absolution. The combatants thought of the divine from the time they got up until they went to bed. They thanked God for eating, for living, for having what little they had… The chaplain gave them an ideological and spiritual shelter.

How has the event been received in the town?

When we thought about the event, we did not expect the brutal reception it has had. On the one hand, the re-enactors and researchers, but also the people of the town, have turned upside down. Everyone has understood that we are going to recreate the past to build our future. There is a lot of illusion with the project. Visitors will join them. It must be said that we will follow all the existing COVID protocols.