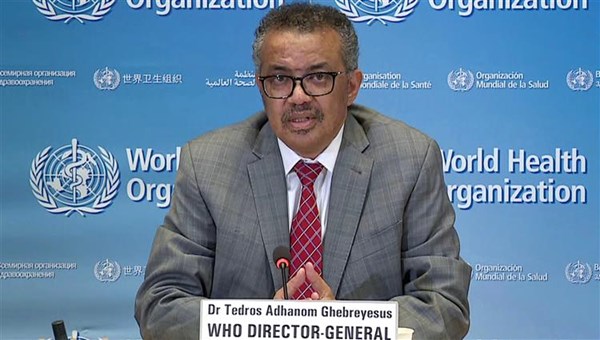 Today, Monday, the Director-General of the World Health Organization called for negotiations this year on an international agreement on pandemics.
The call by Tedros Adhanom Ghebreyesus, Director-General of the Organization, to strengthen preparations for future pandemics, is part of comprehensive reforms adopted by the Organization’s member states.
At its annual ministerial meeting, Adhanom Ghebreyesus said that the United Nations organization faced a “great challenge” to maintain its methods of combating Covid-19 disease at the current level, and this required sustainable and flexible funding.
Earlier today, the last day of the organization’s meetings, the health ministers of member states agreed to study recommendations for implementing ambitious reforms prepared by independent experts to enhance the capabilities of both the organization and countries to contain new pathogens.
The health ministers of the 194 member states of the organization will meet from November 29 to decide on starting negotiations on an international treaty aimed at strengthening ways to address future pandemics.
“The only recommendation, which I believe will be responsible for strengthening WHO and global health security, is to recommend a treaty on pandemic preparedness and control,” Tedros said.
It may be a long way to reach such a treaty. The WHO Framework Convention on Tobacco Control, the first global public health agreement, was concluded in 2003 after four years of discussions. Under the resolution introduced by the European Union, which was adopted unanimously, member states will spearhead reforms over a year-long process.
“It is imperative that we strengthen the role of global oversight and give the World Health Organization the authority and capacity to do this important work for all the people of the world,” Australian Prime Minister Scott Morrison said at the meeting.
The new coronavirus has infected more than 170 million people and killed nearly 3.7 million worldwide, according to a Reuters tally based on official national figures.
Mike Ryan, director of emergencies at WHO, welcomed the decisions, saying in his speech to the annual ministerial meeting, “pathogens have the upper hand right now, and they are appearing more often and often in silence on an imbalanced planet.”
The plenary session officially adopted the decisions today, Monday, the last day of the week-long ministerial meeting.
Experts, who found fundamental failures in the global response to the coronavirus in early 2020, said the WHO should be given the ability to quickly dispatch investigators to track new disease outbreaks and publish their full findings without delay.