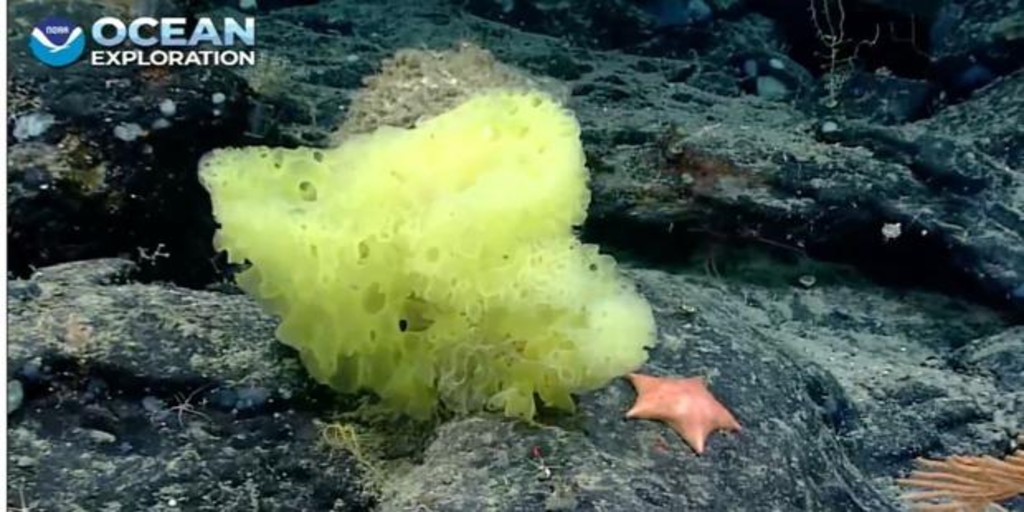 Marine scientists exploring a seamount off the US east coast have made a curious find: a real yellow sponge and pink starfish that closely resemble each other. Sponge Bob Y Patricio, the iconic duo from the cartoon series. Researchers at the National Oceanic and Atmospheric Administration (
NOAAcaptured this snapshot while operating the deep-sea vehicle known as an ROV, which is driven remotely.

Specifically, ROV was in the Retriever Mountain, in the Atlantic Ocean, exploring the ecosystem of the area, in one of the incursions during the last NOAA project: 2021 North Atlantic Stepping Stones: New England and Corner Rise Seamounts expedition. The organization designed the mission to gain more data on the little-studied deep-water areas off the east coast of the United States, mapping the ocean floor and observing regions along with the seamounts of New England and the Corner Rise.

The team used ROVs to study depths ranging from 250 meters to beyond 4 kilometers below the surface, in a total of 25 ROV diving missions, in which they have collected details about deep-sea corals, sponge communities and seamounts.

After reviewing the images of the Retriever seamount, the starfish expert and marine biologist at the Smithsonian National Museum of Natural History, Christopher Mah, saw the image, and quickly shared it through his social networks.

“I thought it would be fun to make the comparison, which for once was comparable to the images of cartoon characters,” explains Mah, as collected
Smithsonianmag. “As a biologist who specializes in starfish, most portrayals of Patrick and SpongeBob are wrong.”

Sea sponges have called the ocean their home for the past 600 million years and consist of 8,500 different species, each of which varies in shape, color and textures. However, none are square-shaped like the SpongeBob character. The yellow sponge seen in the Seamount Retriever belongs to the genus Hertwigia. Seeing the sponge, Mah was surprised to see its bright yellow hue, as deep-sea creatures are often orange or white in color, to help blend in with their surroundings.

The starfish on your side belongs to the genus Chondraster. These starfish can be various shades of pink or white. They use their five arms riddled with mini suction cups to glide across the ocean floor. And although SpongeBob and Patrick are friends in fiction, in reality the relationship between starfish and sponges is not so friendly: the former are carnivorous and feed on crabs, ostas, clams, corals and, in addition, sea sponges. .