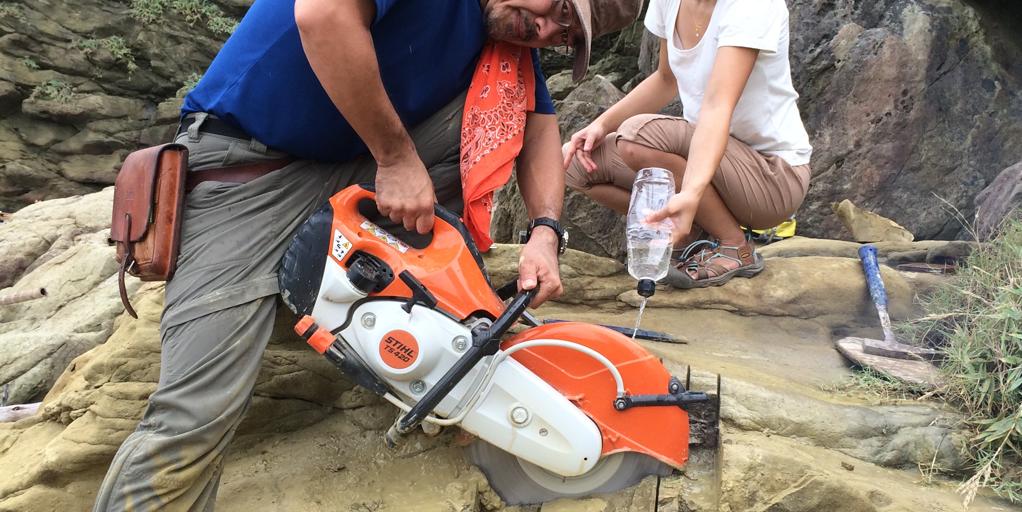 Some 20 million years ago, gigantic worms may have colonized the seabed of the Eurasian continent. These two-meter-long creatures, which seem taken from Lovecraft’s imagination, practiced ambush hunting. They remained hidden in their long, narrow burrows until they were propelled upward to catch their unwary prey with their jaws and drag them inside. This nightmare scenario has been proposed by a team from the National Taiwan University after discovering some surprising fossil traces on the seabed near the island. The findings are published in «Scientific Reports».

The new fossil trail (icnofossil), which they called Pennichnus beautiful!, consists of an “L” shaped burrow, approximately 2 meters long and 2 or 3 centimeters in diameter. To find the same, Ludvig Löwemark and his colleagues studied 319 specimens preserved within layers of the seafloor formed during the Miocene era in northeast Taiwan. “In many cases we were only able to see a small part of the fossil trail. It was not until we found an almost complete specimen in Yehliu Geopark that we were finally convinced that our interpretation was correct, “explains the researcher to this newspaper.

Predecessor of the bobbit

Traces of fossils are geological structures such as burrows, tracks, and root cavities of plants preserved in rocks, which allow conclusions to be drawn about the morphology or behavior of ancient organisms. What the morphology of Pennichnus is that the burrows were probably inhabited by giant marine worms similar to the bobbit worm (Eunice aphroditois), which are still found today.

Bobbits are opportunistic predators that burrow to the bottom of the oceans and use their powerful jaws to capture prey such as fish, squid, and octopus, which they then drag to their burrows. The dimensions of the ancient worms “are very similar to those of the bobbit and the upper part of the burrows also matches,” says Löwemark.

Scientists have so far not found any remains of the animal that occupied those burrows, but if they were related to the bobbits, they probably had fierce jaws as well. “As we have not found the fossil trace of any ‘baby’ worm, we believe that those that produced it did not begin to live in the sandy substrate until they were adults. As in the case of modern bobbits, the juveniles live in freedom and the adults build a burrow to stay ”, clarifies the scientist.

The authors further suggest that the return of an ancient worm with its prey to the burrow altered the surrounding sediment, causing distinct feather-like structures. A more detailed analysis revealed a high concentration of iron towards the upper section of the burrow. This may indicate that the worm rebuilt its nest by secreting mucus to strengthen the wall, as bacteria that feed on the mucus produced by marine invertebrates are known to create iron-rich environments.

Although marine worms have been around since the early Paleozoic, their bodies are primarily made up of soft tissue and are therefore rarely preserved. The fossil trail featured in the study is believed to be the first known of its kind produced by an underground ambush predator.

See Also:  How many opponents did Max Payne kill in all three games? - Ferra.ru