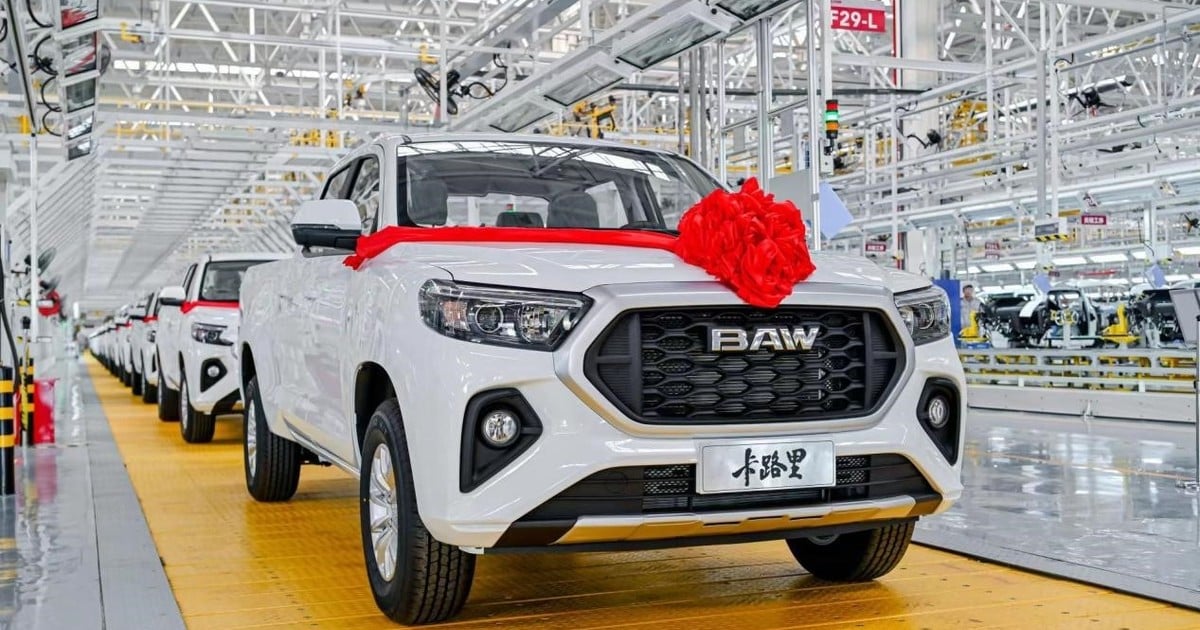 It is produced in China by the BAW brand.

Las chinese brands They are evolving by leaps and bounds. The models they produce have more and more quality, sophistication and load of technology. As a consequence, Chinese cars are also becoming more expensive. However, there is a manufacturer that has just started producing a pickup that costs 8,300 Dollars.

Is about BAWthe company that began manufacturing the Calorie model, a midsize double-cab pickup truck that will become the world’s cheapest in its class.

Although the Beijing-based company is in a transition towards the production of 100% electric vehicles, it does not miss the opportunity to continue offering a model with the characteristics that Chinese cars had when they began to spread throughout the world, more than 15 years old.

The first BAW Calorie rolling off the assembly line.

Far from the sophisticated style that Chinese brands are applying to their new models, this pickup Bet on simplicity and for a super cheap price.

The Beijing Auto Works (BAW) is a subsidiary of the giant BLOCK. In the Asian country, she is recognized for having developed an iconic 4×4, the BJ212, a model that she began manufacturing in the 1960s and that still remains in her range.

And although the company’s news aims to develop more and more electric vehicles, it began to manufacture this truck that as of the end of the year will be sold in China for 60,000 yuanequivalent to 8,270 dollars.

The BAW Calorie will start to be sold in China at the end of the year.

The style that this truck sports is quite simple, with traditional proportions for a medium pickup with double cab body (At the moment none with a simple cabin was shown). However, it contemplates the possibility of choosing between two wheelbase variants, which also ends up giving different cargo boxes.

The conventional version of the Calorie has a length of 5,280 mm and a width of 1,900 mm, measurements similar to those of a Toyota Hilux for example. But with the extended version its length reaches 5,520 mm and the length of the cargo box grows from 1,595 mm to 1,845 mm.

This model will be presented with a motor potion. It is an atmospheric naphthero of 2.0-liter that delivers 144 horsepower and 200 Nm of torque (moment of maximum force of the motor). It joins a 5-speed manual gearbox and is rear-wheel drive. At the moment a 4×4 version has not been announced but it can be equipped with off-road tires.

Inside, the BAW Calorie is more like a car than a pickup.

Although it looks quite rustic on the outside, on the inside it looks more like a car than a pickup. On the board are installed two 10.25-inch screens: one works on the instrument panel and the other is on the central console, it is tactile and concentrates most of the functions.

The rear seat allows you to change its position to be able to locate cargo even inside the passenger compartment. It allows both turning the backrest as well as raising the seat.

The BAW Calorie has a system to expand the cargo space inside.

The 8,300 dollars, which is equivalent to less than 2.5 million pesos, taking the blue dollar as a reference, even represents a low number for the Chinese market, which has a huge offer of pickups but with values ​​that start at 14,000 dollars for models with characteristics similar to the BAW Calorie.