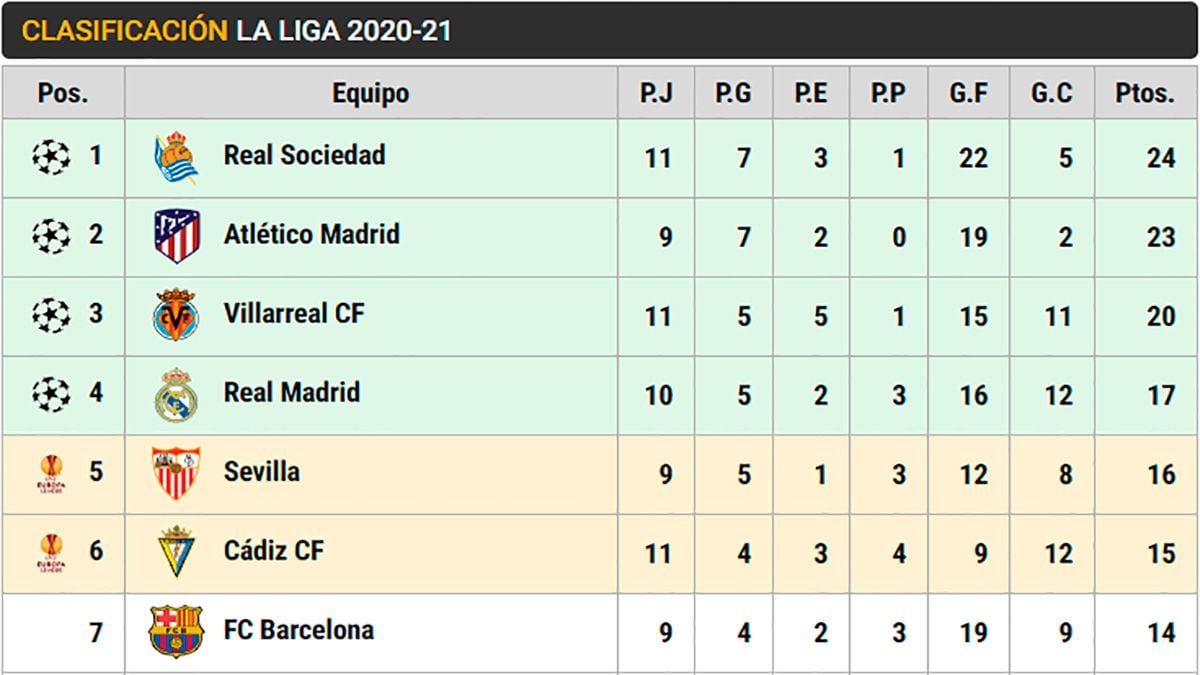 The eleventh day of LaLiga Santander ended with good feelings from a FC Barcelona which is already in seventh position, just three points behind the Champions League with two games less. The culés defeated Osasuna at the Camp Nou (4-0) and they already add 14 points, although the leadership is still at ten, with a Real society who broke his winning streak by drawing against him Villarreal (1-1).

The fiasco of the day was taken by Real Madrid. Zinedine Zidane’s team was defeated by Deportivo Alavés (1-2) who was superior and, therefore, remains in fourth position with his 17 points showing defensive problems that continue to slow down his progression. Despite having added only one point of the last nine possible, he is still in positions of Champions League, but with very little margin against a Sevilla that is one point with a game less than the whites.

The team that did not fail and that each time presents a stronger candidacy to take the title of LaLiga Santander is Atlético de Madrid, who managed to beat Valencia at Mestalla by the minimum (0-1) and what is co-leader together with Real society. The set of Diego Pablo Simeone He already has six consecutive victories in the domestic competition, the last two without his scorer, Luis Suarez.

It also does not loosen a Sevilla that had enough with a goal to knock down the Huesca and add his third consecutive victory. The Seville team knows that this season it has options to fight for the title and continues its upward path, finishing fifth with two games less. The European positions are completed by Villarreal, which accompanies -Atlético, Real Sociedad and Madrid in the Champions League- and Cádiz, in Europa League positions.

The FC Barcelona agenda for this week

The calendar is extremely tight and does not allow breaks, so FC Barcelona will have to face a new day of Champions League facing the Ferencváros in Hungary next Wednesday (9:00 p.m. in Spain). On Saturday, at the same time, the Barça team will have to face the Cádiz in the Ramón de Carranza. Check all the duels through this link.