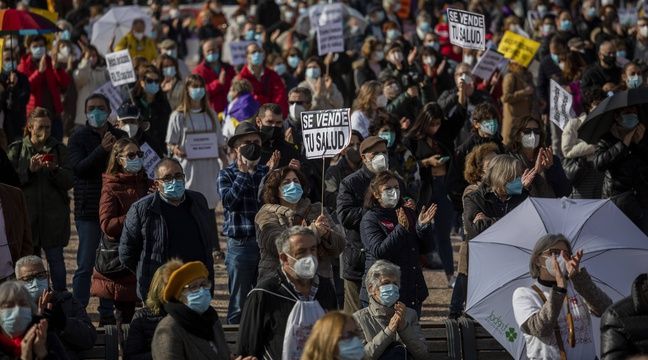 Several thousand caregivers affected by the coronavirus pandemic marched in Madrid this Sunday in support of the Spanish public health system. Holding up placards calling for “100% public health” and “no more trash contracts”, the demonstrators marched to the rhythm of drums in the streets of the Spanish capital at the call of the “White Tide” (Marea Blanca) platform bringing together several professional organizations.

They were nearly 10,000 according to the organizers, although the prefecture of Madrid did not immediately release a figure. fThe protesters notably defended the preservation of the public health system managed by the Madrid region, criticized for its lack of investment in this area in one of the epicenters of the epidemic in Spain.

A new hospital, but what about the new caregivers?

Nurse, Lara García came to protest against the number of “part-time staff, lower wages than in other regions, and I am not even talking about other countries,” she denounces. The demonstration comes two days before the inauguration Tuesday of the Madrid pandemic hospital, built in a few months by the region to relieve congestion in hospitals in the capital.

But many caregivers fear that this new establishment, which can accommodate up to 1,000 patients, will capture resources allocated to other hospitals, in particular health personnel.

“The new hospital is an absolute swindle for Madrid and the people of Madrid. It is absolutely not necessary (…) Madrid has enough beds that could have been used, ”said Leonor Vallejo, 67, a retired ex-nurse.

Spain remains one of the European countries most affected by the pandemic with more than 44,000 deaths and more than 1.6 million cases.