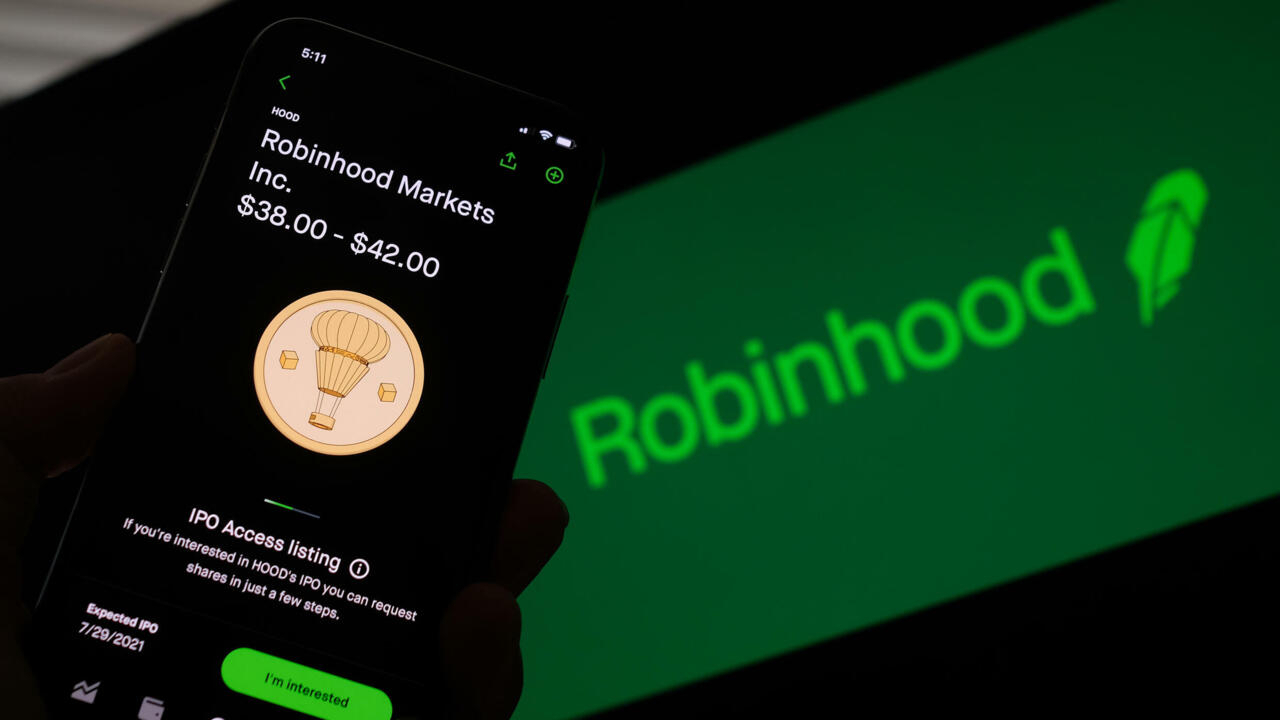 The action of the Robinhood brokerage platform began sharply lower Thursday for its first day of trading on the American electronic stock exchange Nasdaq, a mixed start for the troublemaker of American finance.

The application, which popularized commission-free brokerage and helped revive the interest of small savers for the stock market, will raise $ 1.89 billion on the occasion of this operation.

The first listing values ​​this company born in 2013 at around 32 billion dollars.

Significant price variations are not exceptional for a first day of trading, in particular for young companies with an innovative economic model.

Perhaps even more than usual, these first hours of trading are nevertheless a test for this new brokerage player, who intends to shake up the giants of Wall Street and democratize access to the market.

By deciding to grant 20% to 35% of the new shares directly to its users, when most of the shares are, in general, allocated to institutional investors, Robinhood was making a bet.

According to its managing director and co-founder, Vlad Tenev, Robinhood has won, in six months, ten million accounts to now exceed 22 million, with more than $ 100 billion in assets deposited.

Present in New York for the first day of listing, Vlad Tenev and the other co-founder, Baiju Bhatt, both long hair and rock star look, contrasted with the image of Wall Street.

“When we say that we want to democratize access to finance, it is not just a slogan for us”, argued Vlad Tenev, on the set of the CNBC channel.

“In five years, we want Robinhood to be the most trusted and culturally relevant financial app in the world,” he said.

Some, including the US market regulator, the SEC, are wondering aloud about the viability of the economic model of this platform.

Because Robinhood finances the absence of commissions by subcontracting its large volumes of orders to intermediaries who pay it for it. A legal practice, but opaque and potentially a source of conflict of interest.

“Not all brokers do this in the United States. It is prohibited in the United Kingdom, Canada and Australia and it does not exist in most of Europe”, recently underlined the new president of the SEC, Garry Gensler, looking into this matter.

In its notice of presentation to future shareholders, Robinhood acknowledges that its business is subject to “complex and changing laws” and “regulatory investigations”. “Changes in these laws (..) could harm (our) business,” he admits.

Robinhood rose to global notoriety in January during the GameStop saga, which saw thousands of small shareholders boost the stock of this video game chain from $ 17 to nearly $ 500 in a matter of days.

Unable to manage the flow of orders, Robinhood had to block certain transactions, at the risk of imploding itself, angering many stock marketers.

Part of this very active milieu on social networks then turned against the platform, accused of protecting institutional speculators on Wall Street.

On Thursday, on the Reddit site, many called not to buy Robinhood shares, to give the broker the change of his coin.

On the political side, several elected officials seized on the case and accused Robinhood of participating in the volatility of Wall Street, or of giving a false image of the Stock Exchange as a playing field for small savers.

In June, the group was fined nearly $ 70 million for deceiving its customers and presenting them with false information.