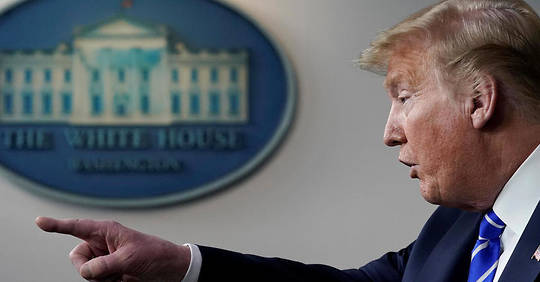 Donald Trump has followed through on his threats. The American president announced Friday May 29 to put an end to the relation between his country and the WHO, which he accuses since the beginning of the coronavirus pandemic of being too lenient with Beijing. “Because they have failed to make the necessary and required reforms, we will end our relationship with the World Health Organization today and redirect these funds to other urgent and global public health needs that arise. deserve, “said the Republican billionaire to the press.

The current White House occupier also said on Friday that China’s behavior towards Hong Kong was “a tragedy” for the world and announced restrictions on Chinese students from entering the United States. Beijing “has not kept its word given to the world to ensure the autonomy of Hong Kong,” he said.

Read also Trump and Twitter: they loved each other so much

The United States has been denouncing for several days the controversial national security law that Beijing wants to impose on Hong Kong. They believe it is a disguised way of muzzling the Hong Kong opposition and cutting corners, which China firmly denies. Displaying his desire to better secure “university research vital to the country”, Donald Trump announced the suspension of the entry of “certain nationals of China who we have identified as potential security risks”.

The American president, however, remained elusive about the exact scope of this decision and the number of students who could be affected. The White House tenant also announced that he is launching the process of eliminating the exemptions granted to Hong Kong as part of the revocation of his special status. “This decision will have an impact on all of the agreements we have with Hong Kong,” he added, referring in particular to the extradition treaty.

The handover of Hong Kong was done in the name of the principle “One country, two systems” which allowed the territory to preserve unknown freedoms in mainland China, in particular a free economy, independent justice, freedom of expression and a Parliament partially elected by universal suffrage. These derogations have led many countries, such as the United States, to pass laws authorizing them to treat Hong Kong as a commercial entity separate from the authoritarian Chinese regime.