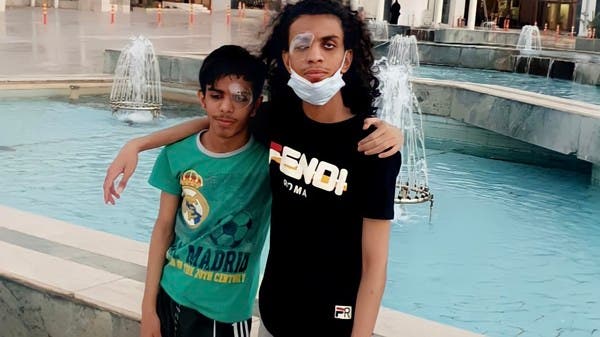 In terms of optimism and hope, the father of the two young men, Osama and Abdul Karim Al-Zaydi, expressed his happiness with the recovery of his children, and the return of their eyesight, after suffering due to severe visual impairment due to hereditary retinopathy caused by a mutation in the RPE65 gene, and a 13-year wait for treatment.

The two young men, aged 14 and 16, underwent surgery by a medical team at King Khaled Eye Specialist Hospital in Riyadh, using gene therapy and injections of the drug Luxturna Luxturna, which is one of the latest treatment methods in the world, and the operation resulted in a review of them, after their suffering from a rare disease.

The father of the two young men, Al-Zaydi, told Al-Arabiya.net: “The operation was successfully completed for the two sons of Osama and Abdul Karim in one eye for both of them, at a time when the family experienced moments of happiness with an improvement in the state of vision for Osama and Abdul Karim, and we are waiting for the completion of the two operations for the second eye for each of them. “.

He added: “My sons used to suffer from vision at night, especially in dark streets, and now the treatment has expanded the field of vision, and we are waiting for the strength of vision to be supported in the next operation, after suffering from a night blindness disease and genetic atrophy, and they have a problem with shaking vision and walking in dim lights. Now the field of view has improved.

The two young men after the operation

The story of the young Osama (16 years old) and his brother Abdul Karim Al Zaidi (14 years old) began at King Khaled Eye Specialist Hospital in Riyadh; They were suffering from “night blindness”, which is a severe impairment of vision in low light.

For his part, the Minister of Health, Dr. Tawfiq Al-Rabiah, commented, through his official account on “Twitter”, on the story documented by the Government Communication Center for the treatment of two brothers for night blindness treatment: “It is an inspiring success story to restore sight to two young men, and it is one of the national achievements that makes us proud of our leadership and our cadres. medical”.

A global shift in gene therapy

In turn, the CEO of King Khalid Eye Specialist Hospital, Dr. Abdulaziz Al-Rajhi, explained that gene therapy and injection of Luxturna is the first of its kind in the treatment of retinitis pigmentosa, and Saudi Arabia is the first in the Middle East, Asia, America and Europe to use this drug. The first patient in the Kingdom was treated in 2019.

Dr. Al-Rajhi also indicated that the discovery of this drug is a global leap in gene therapy and is used for patients who suffer from a genetic defect and a mutation in the gene (RPE65), which is associated with retinal atrophy and leads to gradual visual impairment and may end up with total blindness, indicating that the treatment of patients is done by injecting the drug under The retina works to stop the deterioration of vision and in some cases there is a slight improvement in vision, allowing the patient to move freely in his immediate surroundings, especially in low light conditions.

For his part, Dr. Sulaiman Al-Sulaiman, the surgical team leader at the hospital, a consultant in retinal surgery and uveitis, said: “This type of treatment works to deliver a natural copy of the gene (RPE65) directly to the retinal cells to be able to produce the natural protein that converts light into electrical signals in the retina. The eye helps the patient see better.

He explained that there was no treatment for this disease, which is caused by a genetic mutation that gradually worsens over the years until total blindness, and during 2017 a study was published that Luxturna is a safe treatment for this disease, and in 2019 the treatment was provided in Saudi Arabia, and its value per eye is about one and a half million riyals, Saudi Arabia offers it for free, and the video recorded human moments, reflecting the impact of this medical achievement on their lives a month after the operation.