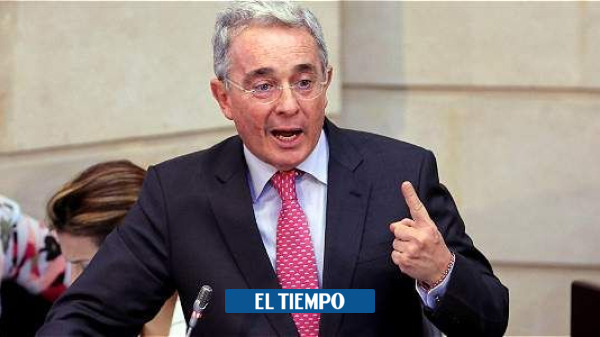 Former President Álvaro Uribe Vélez blamed Juan Manuel Santos for undermining the morale of the Armed Forces to the extreme of leading them to make mistakes.

The ex-president’s assertion was made in the last hours and after the murder of Juliana Giraldo Díaz, 35, which occurred on the morning of this Thursday on a highway in Cauca.

What is Uribe referring to specifically? The question has given rise to discussion. Uribe, who is in preventive detention, as the alleged determiner of the crimes of bribery of witnesses in criminal proceedings and procedural fraud, He argued that Santos “undermined the morale” of the Armed Forces and with “psychological insecurity in many soldiers and policemen” that “leads to fatal errors.”

(Read also: ‘Our crime was to turn around on the public highway’: Juliana’s husband)

Uribe’s statement was made this Friday morning through his twitter account and at a time when there was a shower of reactions from all sectors for the death of the citizen.

“Psychological insecurity in many soldiers and police leads to fatal errors,” Uribe said.

“Narcoterrorism and the prohibition to fight it properly increase demoralization,” he added.

Psychological insecurity in many soldiers and police officers leads to fatal mistakes.

Santos undermined the morale of the armed forces; politicians contribute.

Narco-terrorism and the prohibition to properly combat it increase demoralization;

Uribe’s statement was a trend on social networks. Many voices backed him. Others criticized it.

Among those who criticized what the former president said was former Interior Minister Juan Fernando Cristo, who described this as “pathetic and dangerous.”

Pathetic and dangerous, delirium is already extreme. On August 6, 2022, will they keep repeating that Santos is guilty of everything? https://t.co/ruMcxzt7fn

In this context, Álvaro Uribe’s press office gave his point of view, which he called ‘Commentary on Santos and the morality of the armed forces. AA. ‘

“In a general context, the psychological insecurity of the soldiers and policemen has led them to make fatal mistakes”says a text sent to EL TIEMPO.

“This demoralization of the armed forces comes from the Santos government, which has tried to equate the country’s soldiers with criminals and also did not allow narco-terrorism to be properly fought,” he explains.

“For example, we recently learned of events that occurred in Tuluá, Valle where FARC dissidents subjected soldiers who were carrying out demining work,” he adds.

“As a consequence of this demoralization on the part of the Santos government, the Armed Forces have suffered an impairment in their efficiency and transparency,” he concludes.

Giraldo Díaz died from a shot by a National Army soldier when he was traveling in a vehicle through Guatemala, rural area of ​​Miranda, in the north of Cauca.

The events occurred around 8:30 in the morning, when Giraldo, a 38-year-old trans woman, was traveling in a vehicle with Francisco Larrañaga, his partner, and another man on the road that is located between Cauca and the south of the Valley.

(Also read: Police beat in squad in battalion for death of Juliana Giraldo)

According to Larrañaga, a group of soldiers shot them when he was backing up his car. The man claims that he decided to return home when he saw the soldiers further down the road because they had kept the documents for the vehicle. Another version of events indicates that the soldiers fired because the vehicle did not stop at the stop sign of the uniformed men.

See Also:  tensions in the House after a request from the N-VA which delays support measures for affected sectors

Giraldo, who was traveling in the front seat as a passenger, was shot in the head and died inside the vehicle.

The Specific Command of Cauca reported that the unit reported the facts to the competent authorities. “According to the first information, in the morning hours of this Thursday, in the Guatemalan sector, Miranda municipality, Cauca, when troops from the Alta Montaña Battalion No. 8 José María Vezga, organic unit of the Apolo Operational Command, They were carrying out military control of the area, a woman was killed by a gunshot by a member of the Force. Immediately, the unit reports what happened and is brought to the attention of the competent authorities, ”says the command’s statement.

(Be sure to read: She was Juliana Giraldo, the woman killed by a soldier in Cauca)