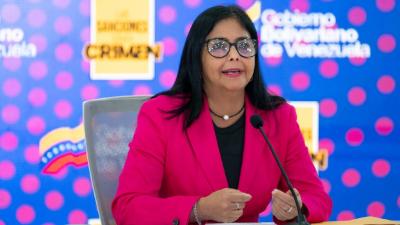 The Executive Vice President of the Republic, Delcy Rodríguez, reported this Thursday that

In this sense, he denounced that last Monday, June 7, the ambassador in Geneva Hector Constant Rosales received a communication from Covax in which they told him that they had received 12 transactions from Venezuela for an amount of 109,968,081 dollars, leaving a balance of $ 10,031,000.

He explained that “Venezuela paid the full fee required by Covax, but the last four payments that reached the amount of 10,031,000 dollars were blocked and are under investigation,” said Rodríguez, who regretted that the resources for the payment of vaccines from Venezuela they cannot be used by the exercise of a hegemonic power of the factual powers such as the international financial system.

The vice president called on the rest of the countries to add voices and act together so that the United Nations becomes a space where sovereign countries live under very clear rules, but also have mechanisms to defend themselves from violations of international rights.

“No one can deny that coercive unilateral measures are a terrible crime for the peoples who are victims, geopolitical objectives of these measures; No one can deny the terrible effects and the impact they have on the population, which has the collective effect on sustainable development. It is a global violation of international law, at the letter of the United Nations “, expressed Rodríguez during the International Academic Conference” Unilateral Coercive Measures: Disrespect for International Law and Generation of Serious Human Consequences. “

He affirmed that these measures are an extortion to the peoples, “Venezuela today is among the 30 blocked countries, it is located in the fifth place of countries with the highest number of sanctions.”

He stressed that in the last five years, Venezuela stopped receiving more than 100 billion dollars from oil production, 99% of the income to the country, something that he compared with countries at war.

The Vice President highlighted that these actions have had an impact on the infrastructure of public services, on the public health network, on the production and distribution of food.

He added that the blockades “become a geocolonial industry to exfoliate the financial resources that belong to the people,” while explaining that Venezuela had to devise new mechanisms to protect the people.

He recalled that the National Government joined other voices to denounce the unequal treatment that has been given to the pandemic, such as access to vaccines and medicines. “Only 10 countries concentrate 87% of the vaccines in the world and the blocked countries, today more than 30, we also have the difficulty of the blockade against our peoples.”