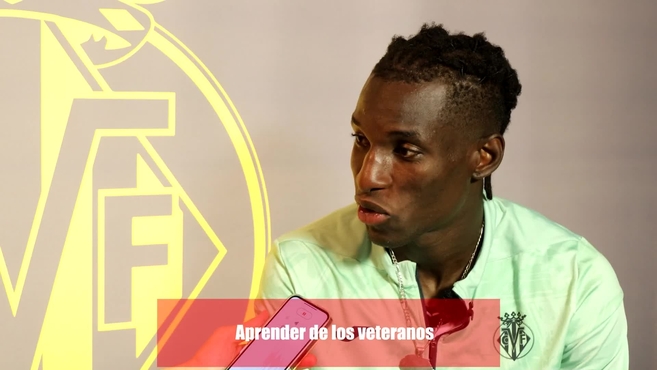 Nicols Jackson It has become the great revelation of the yellow preseason. The young Senegalese striker is not disappointing the trust that has been placed in him Unai Emery based on good performances. After standing out in the subsidiary, “Nico” aims to be one of the offensive options of the submarine this season. He was forged in street football, without going through any academy. A few years later he cannot hide a smile when he thinks about how it would be his first goal in the First Division and he does not hide that his great dream would be to play in the World Cup with his national team.

Ask. Minutes, goals… Nicols Jackson couldn’t have had a better time in his first pre-season with Villarreal’s first team.

Response. Yes, of course! I am very happy with how things are going. It’s been a good preseason for me, a great experience, everything is fine from the moment I arrived

P. For any player it is important to have the confidence of his coach, and in this case it seems that you have that of Unai Emery.

R. It’s giving me confidence and I’m feeling calm on the pitch. Thanks to that confidence I’m getting used to playing with my teammates.

Q. Speaking of your peers. A mixture of veteran players has been formed, with enormous experience such as Albiol, Parejo or Reina and several young players such as Yeremi, Baena, Morlanes or as is your case. How is that coexistence?

R. Very good, the elders are helping us a lot and every day we are learning a lot thanks to them. In my case, they help me on and off the field, and that means I can play very calmly.

P. Reina or Albiol must be the big “bosses” in there…

R. I know they are, and the truth is that they are very funny. But the truth is that this group is like a family, they all function as the same person and that is very good, very important. They advise us to follow them, to do what they say and not stop working. If we make a mistake, they help us. And they tell us to be calm that in the end we will arrive.

P. The experience of having played several games in the first division last season should help you play more calmly.

R. Last season I played eight or nine games that came in handy to find out what the First Division is like and play with them, with the team. The truth is that they came in very handy.

Q. And what is it like to play with one of the best strikers in Europe like Gerard?

R. It is a phenomenon! He has helped me a lot and gives me a lot of advice every day, every training. I am learning a lot from him both on and off the pitch. It will be very good for me to play with Gerard

Q. You are fighting this summer to earn a place in the first team this year. Do you see yourself with many options?

R. I always have confidence in my possibilities, but it is the coach who has to decide in the end. I’m going to work 100% for it and to give the best level I can, the best possible.

P. Very recently you finished the year in a spectacular way with the subsidiary by scoring the two goals to achieve promotion. Your best sports moment?

R. It has been the happiest moment of my life. It was also when I signed my first professional contract, but last year everything went very well. I was very happy throughout the season, but that day was different. The happiness was enormous.

P. You learned a lot from a teacher like Miguel Álvarez in the reserve team and now you have a coach with the prestige of Unai Emery. What does he ask you?

R. Let him work, work and work. Never stop working. He doesn’t stop talking to me both on and off the field. He gives me a lot of advice and I am taking it for good and to improve

P. What do you think you need to improve to establish yourself as a top player?

Q. The moment one begins to live his dream is the moment to have his feet on the ground…

R. And I am aware that this has only just begun. I haven’t done anything, I know. There’s a long way to go and I’m going to work hard to get as high as possible

Q. Since you came to junior a couple of years ago there has been an evolution in your game. You came from Senegal playing a little further back, even on the wing, and now the team makes more of your virtues as a striker. How do you see yourself playing upstairs?

R. It is true that he played a little further back at the beginning. But when I played on loan in Segunda with Mirands I got used to playing up front, just like last year with the subsidiary. I feel very comfortable and I’m fine playing there. The year on loan was very good for me to develop and improve what I did. Unai insists that he worked, that he improve the definition. There are games in which you only have one chance and defining well is three points for your team.

P. You had not left Senegal and it must not have been easy to do so when you were 17 years old to come to Spain and leave your family behind.

R. It was very difficult for me. I had always played soccer in the street, from a very young age. My father didn’t want me to play, because he knew that becoming a professional was very difficult. But I was too stubborn to dedicate myself 100%. I left school to dedicate myself to football and a year later I was already playing in the First Division and shortly after Villarreal looked for me.

P. That moment had to be very special

R. I couldn’t believe it. At first I didn’t tell my mother, because she knew that if she told her she would die right then. My family knew about it and I only told her when I signed. He started crying and it was difficult, but I was very happy for this opportunity.

P. And a big life change comes when you are very young, in which you have to be very focused and surround yourself with people and a representative to help you.

R. It wasn’t easy. The food, the language… I also had the year of the pandemic that complicated everything. At first they were mad at me because I didn’t like this food, but I got used to it in a couple of months. It is important to surround yourself well, and the support of my representative at that time was very important. I learned the language early and that helped me. It’s still hard for me to write in Spanish but I’m working on it.

P. In your country they call you the “Neymar senegals”.

Q. Your career is somewhat reminiscent of a teammate like Chukwueze. He came to the youth team from Nigeria and followed a similar path all the way to the first team.

R. It is a process that must be followed. There are people who tell me that I have to play, that I have to be in the First Division. I know you have to go little by little. I come from Africa and I have never been to a football school because it wouldn’t let me. He played in the street. That’s why I know that first I have many things to learn. It has been very good for me to take steps to improve

Q. Few schools are better than those in Villarreal to learn…

R. For a boy from Senegal it is a dream to be here. I am the third Senegalese who has been at Villarreal after Boulaye and N’Diaye. It is very good to have come here. I really liked Spanish football. When I was little I used to watch Madrid and Barcelona matches against great teams and Villarreal caught my attention, the only team that wore yellow! That’s why when I arrived I already knew the team.

Q. Senegal is experiencing a great moment in football. Champions of Africa and with his presence at the World Cup in a few months.

R. Yes, everyone plays football, the streets are full of children who play for fun. Life is football. people are very happy

Q. Do you dream of your first goal in Primera?

R. Yes, of course. And hopefully soon, in the first or second game. Every time I play I have my family very attentive, also my friends. They are waiting for him and I know he will arrive safely. I have a dream to play here, to make a big name for myself in football.

P. International in the lower teams, you will have the goal of playing soon in the African champion.

R. It was a shame not to be in that team, but I am very happy with what they achieved by winning the African Cup. They did something very big. I hope it can be soon

Q. Will it be the first African team to compete with the best in a World Cup?

R. I have confidence, I think they can do it. We have very big players. It’s early but I have the dream of being able to be in the World Cup. I want to be in this one. There are always options. If I start playing well and do what I have to do, I know I can get there. The. My friend Boulaye is there and it would be nice if the two of us were