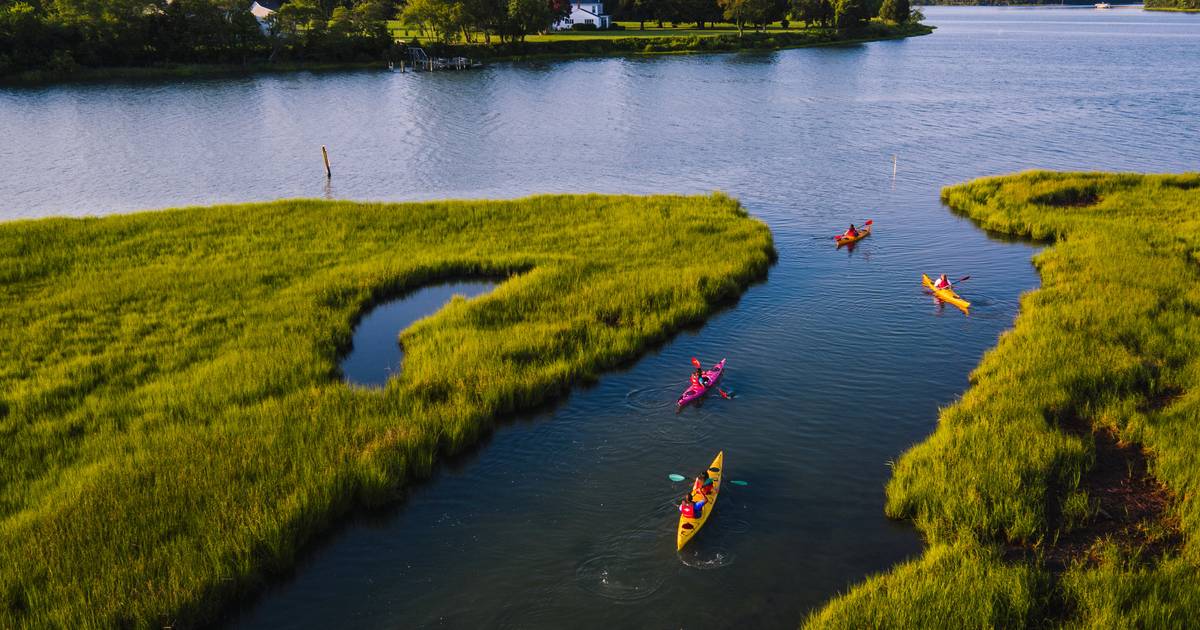 Virginia Beach Beach life like Florida, fishing like New England and farming like the deep South – Virginia Beach has a little bit of everything. On the weekends, the capitals invade. Why a visit is worthwhile for tourists.

Chris Pace is highly concentrated in the shallow water. He’s wearing rubber boots, but they’re getting full from above – he’s standing waist-deep in a foothill of the Chesapeake Bay in Virginia Beach.

Pace fishes in the salty water until he gets a hold of the large, algae-covered cage. He heaves him into his small boat. “I planted the young oysters here about a year ago,” says Chris, who owns the Lynnhaven River Oyster Company. And now he has to check regularly whether they are doing well, whether they are growing and thriving.

It takes about 16 months for the shellfish to be exactly what the restaurants and fish shops in the area want them to be. It goes without saying that they are of first-class quality – Lynnhaven Oysters have been valued as a delicacy by presidents and aristocrats for hundreds of years.

An insider tip for tourists

Seafood and fish on your doorstep, as well as tasty vegetables and fruits: the Virginia Beach cooking scene can embrace the trend of farm-to-table and sea-to-table eating. There is a colorful selection of regional ingredients in every season.

The diverse gastronomic landscape is just one of the incentives for the capital city dwellers to come to southern Virginia for a weekend siesta: Washington is less than four hours away by car, a stone’s throw by American standards.

For tourists, on the other hand, the coastal city is more of an insider tip for a short road trip to the capital of the USA after a city trip rich in culture and history.

Hotel after hotel on the oceanfront

Virginia Beach is at the top of Americans’ bucket list for spring break and beach vacations.

In the Oceanfront district, you can see that they are prepared for the many tourists who don’t want to fly to Florida. The high-rise hotels are lined up on the beach. It’s no different in Miami or Fort Lauderdale.

A “boardwalk” was built here a few years ago, which is a concrete boardwalk three miles long and nine feet wide. It is well populated by pedestrians, runners, cyclists and inline skaters all year round. Surfers, kayakers and swimmers cavort in the water.

And while the Oceanfront is firmly in the hands of tourists, Sandbridge to the south or Chic’s Beach to the north are far quieter. These are the beaches of the locals.

Lighthouses on the military base

Cape Henry Lighthouse is located between Chic’s Beach and Oceanfront. It was built in 1792 and is one of the oldest in the country. The tower’s construction material is the same sandstone that was used to build many of Washington’s most imposing buildings.

The old lighthouse has not been in use for a long time, but it can be climbed. You will be rewarded with a wide view over the Chesapeake Bay. Right next to it is a newer lighthouse, which is also 150 years old and closed to the public. Both towers can only be reached via the active military base Fort Story, where check-in is stricter than at the airport.

From field to table

Much of Virginia Beach happens by the water. But the place extends miles inland. This is where the farmers are at home who supply restaurants and markets. Farm-to-table, i.e. the use of regional products in the restaurants, has been a trend for several years, and not just in the USA.

From potatoes, yams and soybeans to corn and squash, many things are grown here in seemingly endless fields. The climate is warm enough for cotton and peanuts to grow.

At farmers’ markets like the Cullipher Farm in the south of the city, you can get to know the work of the farmers and their products.

From the field it goes back to the water. First Landing State Park is located on Cape Henry, not far from the excellently secured lighthouses. This is where the first British settlers landed. From the park, take eco-tours by kayak or stand-up paddle board where the Atlantic meets the Chesapeake Bay.

“A very special ecosystem has developed here,” says guide Mitchell MacCartney. Moss-covered oaks stand on the shore, numerous waterfowl are at home here. Fish are plentiful because of the ideal living conditions, says Mitch from the sea kayak, gliding calmly across the water. The rich fish stocks attract dolphins, which you can also see with a bit of luck.

Some of the waterways are so hidden between grasses that you have to concentrate in order not to lose touch. That’s not all: “Depending on the water level, it’s easy to hit a sandbank here,” says Mitch.

And it’s already happened. After all: the involuntary break on the sand offers enough opportunities to observe the cranes, herons and eagles before Mitch paddles past and helps back into the water with a strong push. A kayaker in the group wants to know why it sometimes scratches the boat.

“Those are the oysters,” Mitch says. Not only are they bred, they also grow wild.

holiday destination: Virginia Beach is located in southern Virginia directly on the Atlantic Ocean and the Chesapeake Bay. It takes about four hours to drive to the town from Washington.

getting there: Numerous airlines fly from Germany to Washington Dulles Airport, which is located in the state of Virginia. From there you can either drive your rental car directly to Virginia Beach or take a connecting flight to Norfolk. From this small airport it is about 30 kilometers to Virginia Beach.

entry: Travelers must be fully vaccinated and also have a negative test (PCR or antigen) not older than 24 hours. There are a few exceptions to the vaccination requirement, as the Federal Foreign Office writes in its travel information. German citizens also need a valid passport and an electronic travel permit (Esta), which must be applied for in advance, to enter the country.

Climate: In Virginia, the weather is quite pleasant all year round, even in winter there is rarely a frost. The best months for the beach and outdoor activities are April to October.

Accommodation: Virginia Beach has every type of accommodation – from the large chain hotels on the beach in Oceanfront to vacation homes on the other beaches and inland.

The U.S. State Department reiterates that it does not support Taiwan independence Wang Dingyu’s explanation: representing Taiwan’s future is determined by the people of Taiwan | New political head shell Newtalk