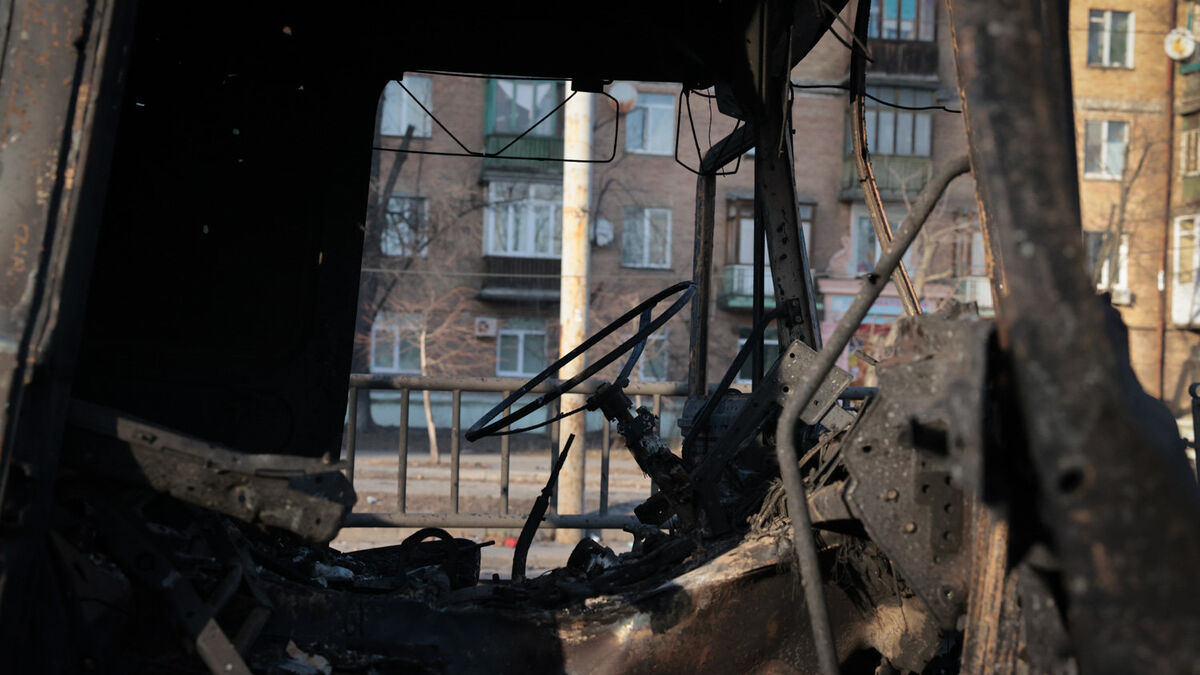 For the first time in four days, Volodymyr Zelensky had to allow himself a few hours of sleep. Unlike Saturdaythe President of Ukraine did not spend the night and dawn recording messages to Ukrainians, talking to Western leaders to get their help, nor called upon to oppose a wall to the Russian advance. However, on the fourth day of Moscow’s offensive on Ukraine, the fighting continues, more intense than the day before. Early this Sunday, Vladimir Putin hailed the special forces “who heroically perform their military duty” by “assisting” the pro-Russian separatists in Donbas. The Russian president argues that the invasion – forbidden word in Russia – is a “peacekeeping” operation. “Last night was hard, again shots, again bombardments of inhabited neighborhoods, of civilian infrastructure. There is nothing today that the occupier does not consider a legitimate target,” Zelensky then reacted.

Russians and Ukrainians fight in the center of Kharkiv

It is the second city of the country by its size and its economic importance. Around 1 a.m., the city was resisting, but three hours later “there was a breakthrough of the Russian enemy’s light vehicles in the city of Kharkiv, including in the central part”, an official said on Facebook. local, Oleg Sinegoubov, indicating that the fighting was continuing and calling on the approximately 1.4 million inhabitants not to leave their homes.

According to the Russian television channel Dozhd, intense shelling was underway in the morning. AFP saw light armored vehicles abandoned or on fire in the streets, while sporadic gunfire and explosions echo through the city. Witnesses reported the presence of Russian vehicles in many neighborhoods. A little before 2 p.m. (1 p.m. French time), the governor claimed that Ukrainian forces were still in control of the city and that many Russian soldiers were taken prisoner.

Around Kiev, the Russians focus on airfields

The capital, under curfew until Monday morning, turned into an entrenched camp, the Ukrainian forces organizing numerous anchor points in the city, as noted by our special envoys, but Russian forces are still only sporadically within its walls. According to a local hospital, a 6-year-old boy was killed in heavy gunfire in his neighborhood in the west of the city on Saturday evening.

Russian troops are trying to tighten their grip around Kiev, targeting towns with airfields to land more troops there. Late Saturday evening, artillery struck Vasylkiv, about 30 kilometers to the southwest, setting fire to an oil terminal. “The enemy wants to destroy everything around it,” Vasylkiv Mayor Natalia Balasinovich said in a video. Photographs and videos posted online showed large flames and toxic fumes. The city of Vasylkiv is central for the Russians: it has a large military airfield and several fuel tanks.

According to CNN, before dawn on Sunday, two loud explosions lit up the sky southwest of Kiev, with one of the detonations appearing to be about 20 km from the city center. According to surveillance images, Russian forces also targeted a radioactive waste disposal site near the capital. The State Inspectorate of Nuclear Regulation of Ukraine conducted a quick inspection and reassured the residents living nearby.

About thirty kilometers from the capital, in Hostomel, targeted on Thursday by the Russians because of its airport, the Ukrainian forces claim to have destroyed a division of 56 tanks on Saturday.

General Magomed Tushayev, right-hand man of the head of the Chechen Republic Ramzan Kadyrov, was reportedly killed. The information has not been independently confirmed.

A column of Russian armed vehicles marked with the letter V was spotted at noon on Sunday near the village of Dmytrivka, not far from Bucha. It is there, a few kilometers from Kiev, that the Ukrainian army is said to have blown up the bridge connecting Bucha to Irpin, to slow the progress of the Russian forces.

The Russian army claimed in the early morning to have surrounded two major cities in southern Ukraine, Kherson and Berdiansk. “In the past 24 hours, the Russian armed forces have completely blocked the cities of Kherson and Berdyansk”, which have 290,000 and 110,000 inhabitants respectively, the Russian Defense Ministry said. “The city of Genichesk and the Chernobayevka airfield near Kherson were also taken under control,” the Russian ministry continued. According to Ukrainian sources, the town of Nova Kakhovka, in the suburbs of Kherson, is entirely under the control of Russian troops. According to Mayor Vladimir Kovalenko, they removed all Ukrainian flags from public buildings.

The Armed Forces of Ukraine announced early on Sunday that they had destroyed a cruise missile fired at Kiev from the territory of the Republic of Belarus by a TU-22 aircraft. A few hours later, according to the Azerbaijani newspaper Zerkalo, Belarusian President Alexander Lukashenko confirmed that missiles had been launched from his territory in the direction of Ukraine. These were, according to this Putin ally, measures imposed by the situation: “on the Ukrainian side, a few kilometers from the border with Belarus, missile divisions were deployed, ready to strike in a few minutes”. “There is not a single Belarusian soldier, not a single cartridge in Ukraine”, however affirmed the autocrat, because, quite simply, “Russia does not need it”.

❗❗❗A few minutes ago, the Air Force of the Armed Forces of Ukraine shot down a cruise missile fired at the capital of Ukraine from the territory of the Republic of Belarus by a TU-22 aircraft.
This is another war crime of Belarus and Russia.https://t.co/Up3Bme3h5v

A Russian delegation in Belarus says it is ready to negotiate

Dmitri Peskov, Vladimir Putin’s spokesman announced that a delegation made up of representatives of the Russian Foreign and Defense Ministries, and the Kremlin, had arrived in Belarus to open negotiations with the Ukrainians. “We will be ready to start these negotiations in Homiel”, the second largest city in Belarus, located 40 km from the Ukrainian border, he said.

Saturday, the same Peskov claimed Vladimir Putin ordered Russian troops to slow down on Friday, to give Ukraine time to respond to its negotiation proposal. Kiev had denied that Moscow had reached out. In a video posted on Telegram this Sunday, Russian President Volodymyr Zelensky says he is ready to discuss with Russia, but only in a country “from where missiles do not fly”. “We want to talk, we want to end the war,” he also said.

Germany, Finland and Ireland close their airspace to Russian planes

“Transport Minister Volker Wissing is in favor of closing German airspace to Russian aircraft” and “has made arrangements to have everything ready for this”, a spokesman said on Saturday evening shortly before midnight. Lufthansa, fearing threats of retaliation, had announced a few hours earlier to suspend its flights to and over Russia for a week.

As for Finland, which shares a border of more than 1,300 km with its Russian neighbor, it is “preparing to close the airspace to Russian air traffic”, Transport Minister Timo Harraka said in a tweet published in the night from Saturday to Sunday. In Ireland, it was the Minister of Foreign Affairs and Defense who announced the news in view of the “shocking Russian attacks on Ukraine overnight”.

Twins were born in a shelter

Their mother gave birth this Sunday in a shelter in Kiev while the anti-aircraft sirens sounded, a few hours before the birth of a little girl, Saturday evening, in Ivano-Frankivsk. These three babies bring to six the number of infants born in shelters since the start of the offensive, according to the Ministry of Health.

In Hungary, Romania, Poland, there is an incessant flow of families fleeing the fighting. This number “is based on data made available by the national authorities”, underlined the High Commissioner for Refugees (UNHCR) in a tweet.

Belgium sends 3,000 automatic rifles to the Ukrainian army: “Ukraine has the right to defend itself”