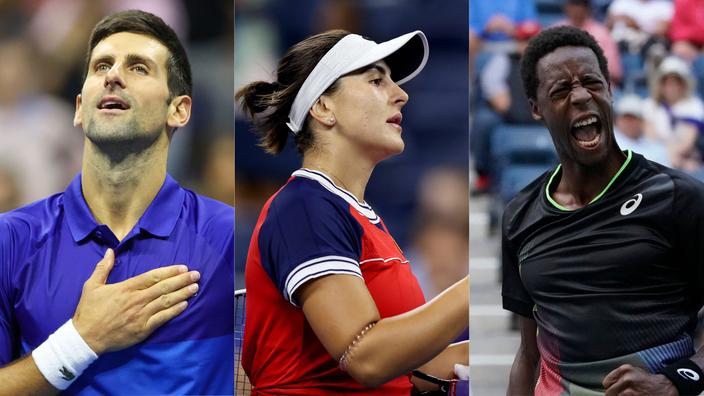 The world n ° 1 and the last French competitor qualified for the 3e tour de l’US Open.

The soap opera, 2e episode
The second step of the soap opera Djokovic. Swallowed at full speed against the Dutchman Tallon Griekspoor (121e world) 6-2, 6-3, 6-2 in 1h39. 13 aces, 33 winning points, 6 break points converted out of 10, 18 points out of 30 scored in the net for the world No. 1 in control. Two brief moments showed his extreme concentration. Broken in the 2nd set (Griekspoor returned to 4-3), he quickly tightened the game and took over the reins. At the beginning of the 3e set, the Serbian briefly pissed off at a spectator whom he accused of screaming just before he hit. Next opponent the Japanese Kei Nishikori (winner 7-6 (3), 6-3, 6-7 (5), 2-6, 6-3) of the American Mackenzie McDonald whom he beat seventeen times in nineteen matches. If one of the two victories of the Japanese had been acquired in … New York, in the semifinals in 2014, the last face-to-face had been a lone rider of the Serbian in the quarter-finals of the Olympic Games in Tokyo, just before that Djokovic loses the thread … Asked on the court, the world n ° 1, launched on the road of the mythical calendar Grand Slam admitted that the hardest in this quest would be on the “mental and emotional level. I can spend several hours on the court, I don’t mind. In a best-of-five-set match, I think I have a very good chance of getting through. I want to stay in the present and enjoy it.»

The come-back
Passed by Aslan Karatsev (semi-finalist of the last Australian Open). The Russian (seeded No. 21) emerged victorious from the match between him and Australia’s Jordan Thompson 3-6, 3-6, 7-5, 7-6 (9), 6-1. Led 2 sets 0, long with his head underwater, he erased two match points in the tie-break of 4e set, before unrolling in the 5e set. He has a date with American Jenson Brooksby (20, 99e) who eliminated 7-6 (7), 6-7 (10), 7-5, 6-2 his compatriot Taylor Fritz (23, 42e) and prolongs a beautiful summer (finalist in Newport, semi-finalist in Washington). Brooksby took a bathroom break of… 7 minutes after winning the third set, scoring a point by passing the ball past the net. Spectacular in an intense, hotly contested match.

The number : 2
For the first time since May, Bianca Andreescu (n ° 6, winner of Flushing Meadows 2019) has two victories. The Canadian dominated American Laura Davis 6-4, 6-4. Nothing was easy for Andreescu who was broken from the start, lost his serve four times during the match but managed to stay in the saddle. At 3e tour, Bianca Andreescu has an appointment with the Belgian Greet Minnen (104e).

An iron hand
From start to finish, they surrendered blow for blow. The game was intense, indecisive (no break point in the 3e set) between Karolina Pliskova (24 aces) and Amanda Anisimova. Pliskova retained her serve in 17 of her 18 serve games, Anisimova 16 of her 18 games (70% success on her 1st serve for Pliskova; 73% for Anisimova). “In women’s tennis, normally there is the break, the break, the break, the break. It’s pretty impressive I think.The Czech led 5-2 in the tie break of the last set, dismissed a match point before winning against the American at the end of the suspense7-5, 7-6 (5), 7-6 (7) in 2h21. The match at the start of the tournament.