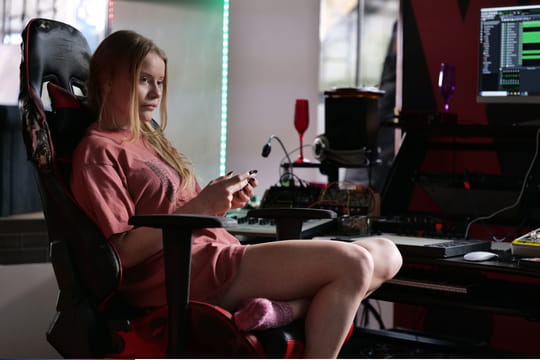 RUNAWAY TF1. Romane Jolly plays the main character of Fugueuse, the last mini-series of TF1 broadcast on Thursdays. A difficult role, between nude scenes, teenage crises and violence for the actress who plays her first role here.

[Mis à jour le 23 septembre 2021 à 20h40] In Fugueuse, a mini-series broadcast on Thursdays on TF1, Romane Jolly plays Léa, a young teenager under the influence of a man who will gradually fall into violence and prostitution. Young debutante in front of the camera (she has shot in a few clips and a short film before), the main actress had to play scenes of violence and nudity, very intense.

Yet, as Romane Jolly reveals in an interview with Allocine, “it was neither the nudity, nor the violence, nor the tears” which were the most difficult to film in Fugueuse: “The most difficult for me was to play a teenager, at the beginning, without problems. Because I had the life I had, and at 16 I wasn’t like Léa. Playing the very smooth, candid, very solar side of the character, so it was not easy for me, because I am very different from Lea. ” His performance, however, won over viewers who spoke about it on social networks.

Her face certainly doesn’t mean anything to you at all, and that’s quite normal: Romane Jolly finds her first role in Fugueuse, a fiction on the prostitution of minors broadcast on Thursdays at 9:05 p.m. on TF1 (and already on jump). However, this young actress has followed an acting career since adolescence: she started at Cours Florent, before training at the Juliette Moltes workshop. At the microphone of RTBF, the interpreter of Lea in Fugueuse explains that she went to film school (she obtained a license as an assistant director), but did not imagine herself becoming an actress or a model, two professions that she now exercises .

It is in 2020 that Romane Jolly takes his first steps in comedy, playing in the short film “So far everything is going well”. Quickly, he was offered the first role of Fugueuse. A complicated start for the actress, who had to act out scenes of violence and nude from her first steps in front of the camera, while giving the answer to names of French cinema: Sylvie Testud and Michaël Youn. The fiction of TF1 opens wide the doors of comedy, since it will soon be on the poster of the series “My angel” alongside Muriel Robin. Viewers have certainly not finished hearing about Romane Jolly.

Fugueuse, broadcast since September 23, 2021 on TF1, deals with the prostitution of minors and the difficult struggle of the parents of a teenage girl mired in this infernal spiral. The plot follows the story of Lea, a teenage girl from a good family who comes into conflict with her parents and decides to run away. Her meeting with a pimp with whom she falls in love will plunge her into the world of escort-girls and prostitution. A chilling fiction, Fugueuse is however inspired by a very real social phenomenon. In July 2021, the Ministry of Solidarity and Health estimated that 7,000 to 10,000 young people, often girls aged 15 to 17, from all socio-economic backgrounds, were selling their bodies on online ad sites. . The emergence of social networks has only amplified this phenomenon.

Synopsis – Léa, a teenage girl from a good family, falls under the influence of an older man. Without being aware of the manipulation she undergoes, the young girl falls into a dangerous spiral and plunges into prostitution. Fugueuse is adapted from the Quebec series of the same name.

In the casting of Fugueuse, Romane Jolly finds her first role in the guise of Léa. Her parents who try to get her out of the gear, Stéphane and Isabelle, are embodied by Michael Youn and Sylvie Testud. Julie Depardieu, Stanley Weber, Arié Elmaleh and Shirine Boutella are also part of the cast of the TF1 series.

Broadcast on TF1 Thursdays at 9:05 p.m., Fugueuse is also accessible to streaming fans. It is possible to follow the series on underage prostitution live on the MyTF1 site (which also offers the episodes in streaming the day after its broadcast) for free. Salto subscribers can already discover all the episodes on the streaming platform, for € 6.99 / month for the cheapest offer. Note, however, that the series worn by Michaël Youn and Sylvie Testud is not available on Netflix.