I recently saw a piece of news about how the United States will discuss with its partners and allies on how to take coordinated actions to participate in the Beijing Winter Olympics next year.

US State Department spokesperson Price was asked at a regular press conference whether he would discuss with allies and whether he would consider boycotting the Beijing Winter Olympics. He said that this is of course something that he hopes to discuss, and he reiterated that Washington is concerned about China’s human rights violations. Coordination is not only in the interests of the United States, but also in the interests of allies.

Next year, Beijing will host the first Winter Olympics.

However, shortly after the press conference ended, Price sent an e-mail to the media to clarify that what he was referring to was that the United States wanted to coordinate with its allies, rather than specifically discuss boycotting the Beijing Winter Olympics with its allies. He posted on Twitter again, stating that no new news was announced.

At that time, the number of leaders from various countries who attended the opening ceremony in Beijing reached 80, setting a new historical record. Including some heavyweights, including US President George W. Bush and Russian President Putin, as well as Australian Prime Minister Rudd, French President Nicolas Sarkozy, Japanese Prime Minister Yasuo Fukuda and so on.

I stayed in Beijing for a month to cover the Olympics. During the interview, I witnessed the interaction between various countries and China, especially the changes in Sino-US relations in recent years.

At that time, the most hit game was the China-U.S. basketball game. The United States was the “dream team.” Their NBA’s main players were all on the court. Although the Chinese team was led by Yao Ming, the overall strength was still far away. As a result, the U.S. The team defeated the Chinese team 101:70.

See Also:  The women and the Second Vatican Council

Before the start of the game, I knew that this war of the century would definitely be the focus of the news. At that time, Bush had been president for nearly 8 years and had seen him many times on diplomatic occasions large and small. According to his personality assessment, he Very likely to watch this game. So after noon, we went to line up outside the stadium to take the lead to occupy a better position. Our camera team stood in the middle of the back row of guests of the head of state. 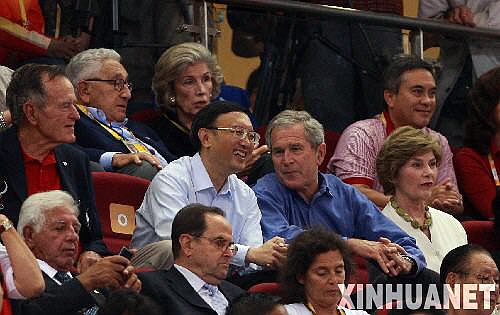 Sure enough, after a large number of American secret service personnel entered the scene, Bush and his wife arrived at the scene, and he sat in the first 4 rows of our camera, that is, we were very close to him, and accompanied him. Bush also had a familiar face, Yang Jiechi, who had already become foreign minister at that time.

Before sitting down, Bush shook hands with nearby guests. I remember that an American guest should be a businessman (Olympic sponsors can get the same treatment as national leaders, and they can choose their seats in the spectator seats). He shook hands with Bush, and looked back at our camera and said that he was very excited. I plan not to wash my hands tonight. 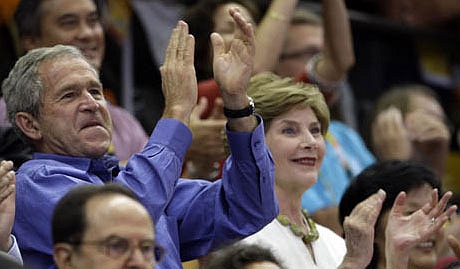 Little Bush was very engaged during the game.Online pictures

When Yang Jiechi accompanied Bush to watch this game, he was also very engaged and kept talking. Little Bush has the kind of personality that Americans express feelings directly, so during the game, he kept clapping and shouting, and he was very engaged.

When Bush was leaving, we certainly did not miss this opportunity to interview. We called him loudly and asked him some of his views on Sino-US relations. Perhaps the venue was noisy at the time, so he just waved and smiled at the camera. He smiled, and left without answering the question.

On the second day, he continued to consider Bush’s itinerary. It is estimated that he would choose the prestigious competition of the American team. So he went to the Water Cube Swimming Hall early in the morning. Sure enough, he appeared again and witnessed the 4×100 American men’s swimming team led by Phoebe. The moment of the m freestyle relay championship.

Bush met with Phoebe in the backcourt and touched his gold medal and didn’t let go.

The arrangements for the Olympics are such that the security check for entering the Olympic Village is very strict, but once you enter the stadium area, it is very relaxed, and you can almost say that you can interview at will. But for high-level leaders such as the President of the United States, not only Chinese security guards are more cautious, but American secret service personnel are also very fierce. Originally, the Chinese security guards had promised us that they could wait outside the railing less than 2 meters away from Xiao Bush, and I could ask him questions loudly. But as soon as the American security came out and saw that we were within two meters, he said that he couldn’t, and must drive us 20 meters away.

The security guards of both sides still argued for a while, but the American security guards didn’t talk to you at all. They just forcibly pushed us 20 meters away with the camera, and finally I could only watch the little Bush get in the car and leave from a distance. Up. 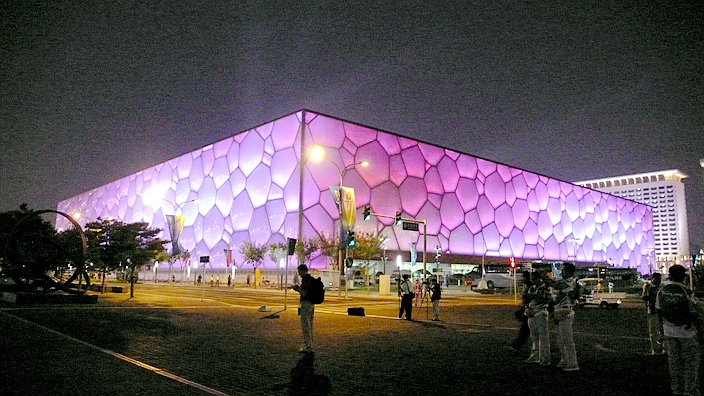 Outside the Water Cube Swimming Hall, media interview teams can be seen everywhere.

Therefore, sometimes you can also see the competition of national power in some small diplomatic matters. The US security guards don’t make sense to you and drive the reporters directly. At that time, the Chinese security guards were relatively polite and did not stop them. Of course, today’s China’s confidence is different. I still remember that at the China-US Dialogue not long ago, when the US wanted to drive out Chinese reporters, Yang Jiechi sternly opposed it, allowing Chinese reporters to take pictures of the century of Sino-US struggle.

See Also:  the mayor of Châtel calls for the return of skiing by singing "A song for Matignon"

Going back to this recent incident, the spokesperson of the US State Department quickly clarified what he said about the Winter Olympics. It made people think that after the US publicly confronted the two sides of the high-level Sino-US dialogue in Alaska, it seemed that the US had begun to adopt a more cautious attitude towards China. Not just blindly.

My personal opinion is that, first, the Democrats are more disciplined and more orthodox than the Republicans. They definitely don’t want to do something as big as boycotting the Olympics. As to whether to boycott Beijing Dong’ao, the senior US government has no final conclusion. After all, boycotting the Olympics is a very, very big international issue. It is unpredictable what kind of chain reaction will it cause in China. Under the current circumstances, although Sino-US relations are becoming more and more tense, going to the boycott of the Olympic Games is tantamount to completely isolating China in international affairs. Can the United States afford the consequences?

For Biden, who has just taken office, he is not just an opponent in front of China. He also has a heart demon, that is, the person he hates most is Putin. After all, Russia, led by Putin, was against the Democratic Party during the U.S. election. A large-scale attack and a large number of scandals have been released. In the current situation, Biden or the Democratic Party, in fact, the number one enemy is Russia and Putin.