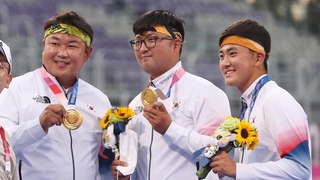 The semi-final against Japan was a turning point, and the youngest Je-deok Kim shone.

This is reporter Kim Jong-ryeok from Tokyo.

While Kim Woo-jin is counting the time, the eldest brother, Oh Jin-hyuk, puts the bow and says ‘It’s over’

It was a word from Oh Jin-hyuk, who was sure of 10 points.

The arrow that flew through the wind hit exactly the 10-point target, and the national team confirmed the gold medal.

After all, Korean archery was the best in the world.

The hump was the semi-final against Japan.

In the shoot-off held after a set score draw of 4-4, the two teams could not decide the match with 28 points.

In the end, the team that shot the closest to the center of the target advanced to the finals, and it was confirmed that Kim Je-deok’s 10 points were 3.3 cm from the center, and Japan’s Kawata’s arrow was 5.7 cm away.

A difference of 2.4cm determined the match.

“Kim Jae-duk is a hero in my personal opinion today. To be honest, he shot 10 points in every difficult situation and kept the atmosphere going…”

This is Kim Jong-ryeok from Yonhap News TV in Tokyo.